A new smartphone has just surfaced on GFXBench under the 'QiKU 1607-A01' codename. Now, this is quite interesting considering that QiKU devices are no longer being made, Qihoo 360 is now manufacturing devices under the '360' branding, so it is almost certain that this phone will not carry the QiKU naming. Having said that, this phone that just surfaced on GFXBench actually comes with a really nice set of specifications, though it's still a mid-range smartphone, read on.

The 'QiKU 1607-A01' will sport a 5.7-inch fullHD (1920 x 1080) display, along with 6GB of RAM and 64GB of native storage. This handset will be fueled by the Snapdragon 652 64-bit octa-core SoC, which comes with the Adreno 510 GPU for graphics. This is one of Qualcomm's best mid-range processors at the moment, and it will be clocked at 1.8GHz, if GFXBench is to be believed. Android 7.1.1 Nougat will come pre-installed on this smartphone, and you will get Qihoo 360's UI on top of it. Qihoo 360 had actually introduced a smartphone earlier this year, back in February, the 360 N5, which also comes with 6GB of RAM, though it sports a smaller, 5.5-inch display, compared to this newly-spotted handset, though its SoC is quite similar, as that phone comes with the Snapdragon 653.

It is quite interesting that this phone got listed under the 'QiKU' name, as that did not happen with previous Qihoo 360's smartphones, at least not since the company decided not to use the 'QiKU' naming any longer. So, what phone are we looking at here? Well, it is possible that this will be one of the devices in the company's 'N' series, perhaps the 360 N5 Plus, or something of the sort, as this phone is quite similar to the aforementioned 360 N5, so it makes sense. This is just an educated guess, though, we'll have to wait and see what will happen, as Qihoo 360 will probably introduce this smartphone in the near future. One thing is for sure, this phone will be quite affordable, as was 360 N5, which came with a price tag of 1,399 Yuan ($206), at least that was its price in China (for a 32GB storage variant of the phone). 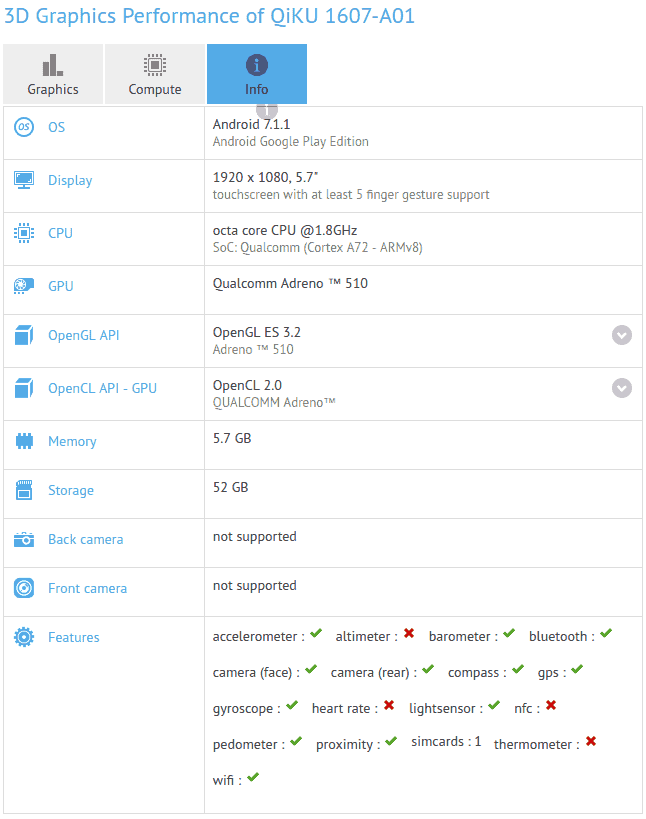