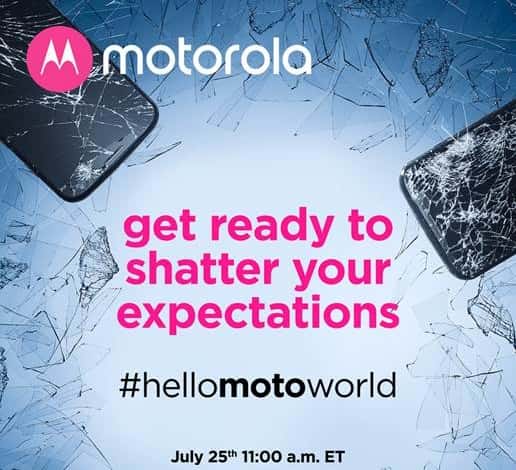 Motorola had already announced that it will be hosting an event on July 25 in NYC. However, the company has now started sending out new invites which may provide some insight into what can be expected from that event. In particular, the new invites now circling clearly state that Motorola intend to “shatter your expectations.”

This does naturally lead to the assumption that the next-generation Moto Z Force will be introduced at the event, which is currently being dubbed the ‘Moto Z2 Force,’ following on from the naming scheme in effect with the recently announced Moto Z2 Play. However, this latest teaser does not outright provide any confirmation on whether it will be the Z2 Force announced at the event. With some rumors also pointing to more than one device as expected to be announced in the coming weeks, including a non-Force version of the Moto Z2 and a new Moto X smartphone, the Moto X4. In either case, what this latest tease does seem to suggest is that whatever is announced at the event will likely come with the company’s ShatterShield technology in place. A technology which draws on a multi-level design approach to the display, ensuring that it does not shatter or break and even when encountering more extreme environments. The technology is already in effect on some Moto-branded devices, such as the Droid Turbo 2, and of course, the previous generation Moto Z Force.

Current teaser aside, the Moto Z2 Force has been routinely hitting the news lately thanks to a number of leaked renders and rumors having come through. Of those rumors, one of the most persistent is that the Moto Z2 Force will come equipped with a dual rear camera setup. While collective reports suggest the sum of the rest of the specs will include a 5.5-inch display along with a 2560 x 1440 resolution. In addition to the likelihood of 6GB RAM, 64GB internal storage, and a Qualcomm Snapdragon 835 SoC. Another almost given aspect, is that the Moto Z2 Force will also continue the recent Moto trend of being compatible with the company’s various Moto Mods. Thereby, adding value by either adding new features or amplifying existing ones. Now of course, providing this latest tease from Motorola is indeed teasing the Moto Z2 Force, then it looks like ShatterShield protection is something else that can be added to the Moto Z2 Force’s feature and spec list.