Motorola has begun sending out press invites for a July 25th event in New York City that called #hellomotoworld. Moto did not give any details on what exactly would be happening at that event, but given the venue and timing, as well as a string of recent leaks of both phones, seeing the Moto Z2 Force and Moto X4 at least being announced, if not released, is logically quite likely. If the Moto Z2 Force makes a showing, the thinner, less durable Moto Z2 will likely show up as well. Moto also recently put a refresh of its Verve Cam on Amazon without much fanfare, so that may get some attention at the event. Still, without any official word from Moto as yet, speculation is the best information anybody is going to have for the time being, save for the possibility of information about the event leaking out in advance.

The Moto X4 has been the subject of numerous recent leaks, while the Moto Z2 Force had some information surface a while back and has been a mostly quiet topic since, aside from a couple of photo leaks, with one showing a variant sporting an AT&T logo on the back. The Moto X4, according to leaks so far, is going to be a metal-clad mid-ranger with a dearth of features, a callback to the original Moto X’s focus on features over specs for a good user experience. IP68 water protection is also allegedly on board. The tough Moto Z2 Force, meanwhile, is rumored to be the company’s new flagship. This year’s Force model is almost as thin as the vanilla Moto Z2, if leaks of both phones thus far are accurate, but still features all the protection of last year’s model. The Moto X4 is said to be powered by a Qualcomm Snapdragon 630 processor, while the same powerhouse Snapdragon 835 that’s in competing flagships like the Samsung Galaxy S8 and HTC U11 is supposedly what’s going to be inside the Moto Z2 and Moto Z2 Force.

The last event that Moto sent out invites for that was similar to this one happened on June 27th, and was advertised by a poster that depicted a model holding what looked to be a Moto Z2 or Moto Z2 Force, but ultimately wound up being a launch event for the unlocked version of the Moto Z2 Play. Moto has been teasing fans with the Moto Z2 and Moto Z2 Force for a little while now, and the original duo hit Verizon as exclusives back in July of last year. The timeline and recent news all add up; this July 25th event is not explicitly stated to be the launch of the Moto Z2 and Moto Z2 Force, but the evidence seems to be all there. 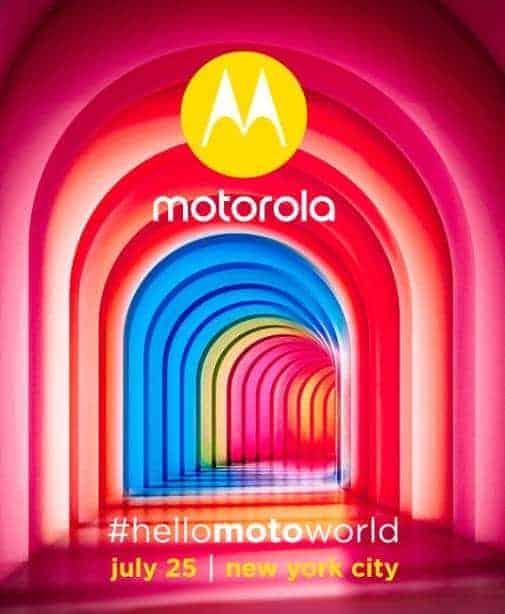