Moto M units in India are now receiving an update which will install Android 7.0 Nougat. Aside from the latest version of the Android operating system, the update will also install the May 2017 security patch and Google’s video calling application Duo. Once installed, the owners of the Moto M will experience the latest features offered by Android 7.0 Nougat. Among these new features is the native support for split-screen viewing of applications. Since the split-screen multitasking is now natively supported by the operating system, more applications can now be used simultaneously by the user. Aside from the user-facing features, Android Nougat also brings under-the-hood improvements. One of the key improvements that the update should bring is the improved version of the Doze feature. This improved feature should bring better battery life to devices running the latest version of the operating system. In addition, the May 2017 security patch, while not the latest available from Google, should still protect the handset from a wide range of known vulnerabilities of Android OS.

The latest update to the Moto M weighs in at 1499MB, which is not surprising since it will install a new version of the operating system. It is advisable that the device owners should download the update through a Wi-Fi connection and the device’s battery has at least 50 percent charge before the update process begins. It is important that the device does not shut down during an update, as it may cause problems during the update process. Since the update is being rolled out in stages, it will take some time before all devices receive the update. However, those who want to install the update manually may do so in the About Phone section of the device settings.

The Moto M is one of the mid-range offerings of the Chinese electronics manufacturer Lenovo, which owns the Moto brand. The device is powered by the Helio P10 chipset from MediaTek and is equipped with 5.5-inch FullHD AMOLED display. In order to key the device’s lights on, Lenovo incorporated into the Moto M a 3,050mAh battery and fast charging capability. For the device owner’s imaging needs, the Moto M is equipped with a 16-megapixel rear camera and an 8-megapixel front camera. Lenovo also added biometric security features into the device through a fingerprint scanner at the back. 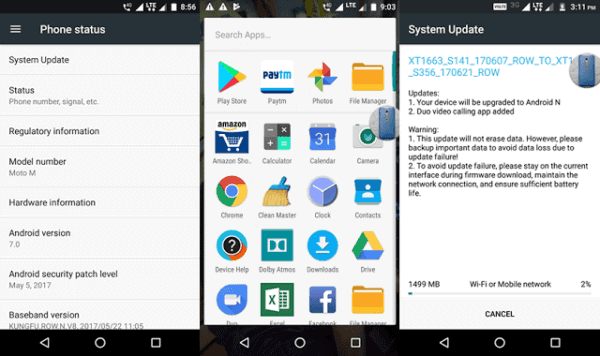