The Moto E4 is made out of metal, and its camera ‘oreo’ protrudes on the back a bit, while this handset also comes with a front-facing fingerprint scanner which is placed below the phone’s display. The company’s branding is visible on both the front and back sides of the Moto E4, and this handset ships with Android 7.1.1 Nougat out of the box. The Moto E4 sports a 5-inch 720p (1280 x 720) display, with a 2.5D curved glass on top of it. The device is fueled by the MediaTek MT6737 64-bit quad-core SoC clocked at 1.3GHz, which also comes with the Mali-T720 MP1 GPU for graphics rendering. This handset packs in 2GB of RAM and 16GB of expandable storage (expandable up to 128GB via a microSD card). An 8-megapixel shooter (f/2.2 aperture, 71-degree lens) can be found on the back of the Moto E4, while a 5-megapixel camera (f/2.2 aperture, 74-degree, wide-angle lens) is placed on the front side of this smartphone. A 2,800mAh battery is included in this package as well, and this battery is not removable, while it comes with support for 5W rapid charging. The Moto E4 measures 144.5 x 72 x 9.3mm, while it weighs 150 grams.

The Moto E4 comes in Black and Brush Gold color variants, and it is priced at Rs. 8,999 ($140) in India. The Moto E4 will be available in offline retail stores only, it seems, which is rather odd considering that the Moto E4 Plus can be purchased through Flipkart, exclusively. In any case, both of Motorola’s budget offerings are now available in India, and they’re both quite affordable, even though the Moto E4 is a considerably cheaper smartphone. 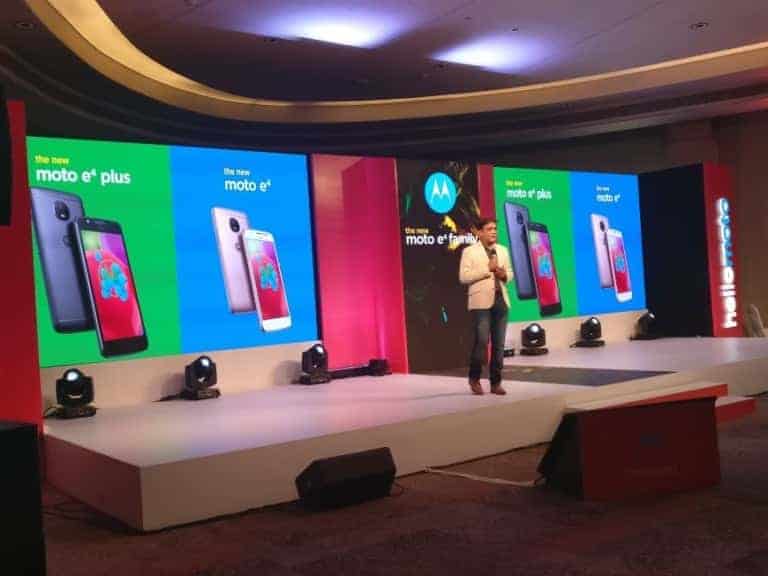