The Meizu PRO 7 has been the subject of many leaks and rumors in recent times, though none of them seemed to have shed light on nearly any specs featured into the upcoming phone – until now – courtesy of one Weibo user who shared an image of a promotional leaflet for the device. Now, with only a day before the Meizu PRO 7 is officially announced, details of the phone have surfaced via the Chinese microblogging site. The leak revealed that the smartphone is supposed to come in two versions: one with 4GB of RAM and 64GB of internal storage and powered by the Helio P25 system-on-chip, and another that includes 4GB of RAM and 128GB of native memory and is powered by the Helio X30 processor. If the second variant does include MediaTek's Helio X30 chip, the Meizu PRO 7 would be the first phone to ship with this particular piece of silicon.

According to the same source, the phone is allegedly sporting a 5.2-inch main display and a secondary screen located on its back that's said to be of the 1.9-inch variety. The latest leak seems to corroborate a previous one, which revealed that the phone will launch on July 26 and come with two displays. On the optics side of things, the phone is said to be boasting a dual camera setup, with both shooters featuring a 12-megapixel sensor. The front camera is supposed to be of the 16-megapixel variety, according to the leak. Finally, the leaked material revealed that the Meizu PRO 7, which will allegedly run Android 7.0 Nougat with Flyme 6 OS, will ship with the company’s own mCharge technology for quick charging.

Previous leaks regarding the Meizu PRO 7 suggested that the phone will ship with a USB Type-C port along, 3.5mm headphone jack, and a 3,000mAh battery that presumably isn't removable. While the leaflet makes no mention of any pricing details, it was previously reported that the Meizu PRO 7 will have a price of 2,599 Yuan, which is equivalent to $382. It remains to be seen whether these details hold true or not once the company officially unveils its latest phone tomorrow, July 26. 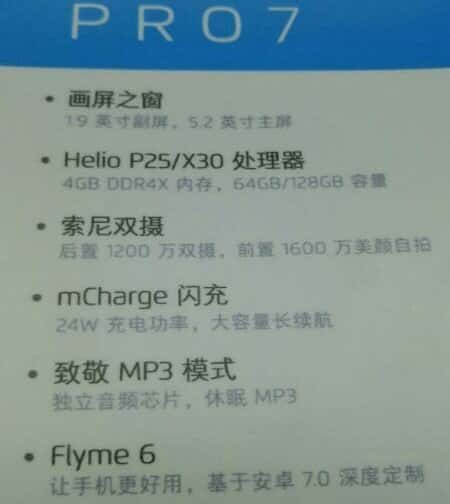