It’s unclear what other changes Google may be working on for Play Music at this time, but it definitely looks like Google has some things up its sleeve. This feature is still being tested among a small group of users right now. And as is usually the case with these tests from Google, this feature may or may not roll out to everyone. Google typically does test out new features, UI changes and such for its apps among a small group of users, to gauge how these users react, possibly how their behavior within the app changes and such, before it decides to roll out that feature to everyone.

This feature is appearing in version 7.9 of the Google Play Music app, but many are unable to get this functionality to appear on that version. So it does indeed appear to be a server-side change that Google is doing for selected users. Seeing as this isn’t part of a beta, it’s interesting to see who gets this change on their install of Google Play Music. The app itself does need a fairly big overhaul, but it is still nice to see Google adding in some new features to the app and keeping it up-to-date. Google Play Music is both free and subscription based, and allows users to play all of their favorite music, whether stored in the cloud or from Google’s catalog of music. It also has support for podcasts and music videos thanks to the YouTube integration. 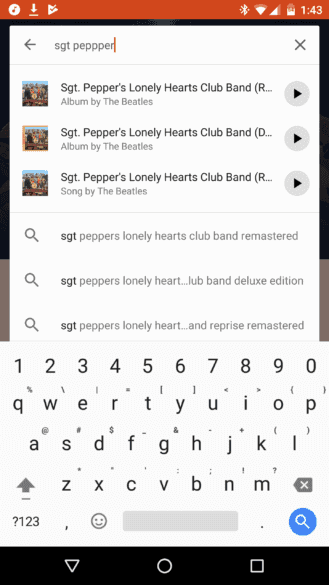