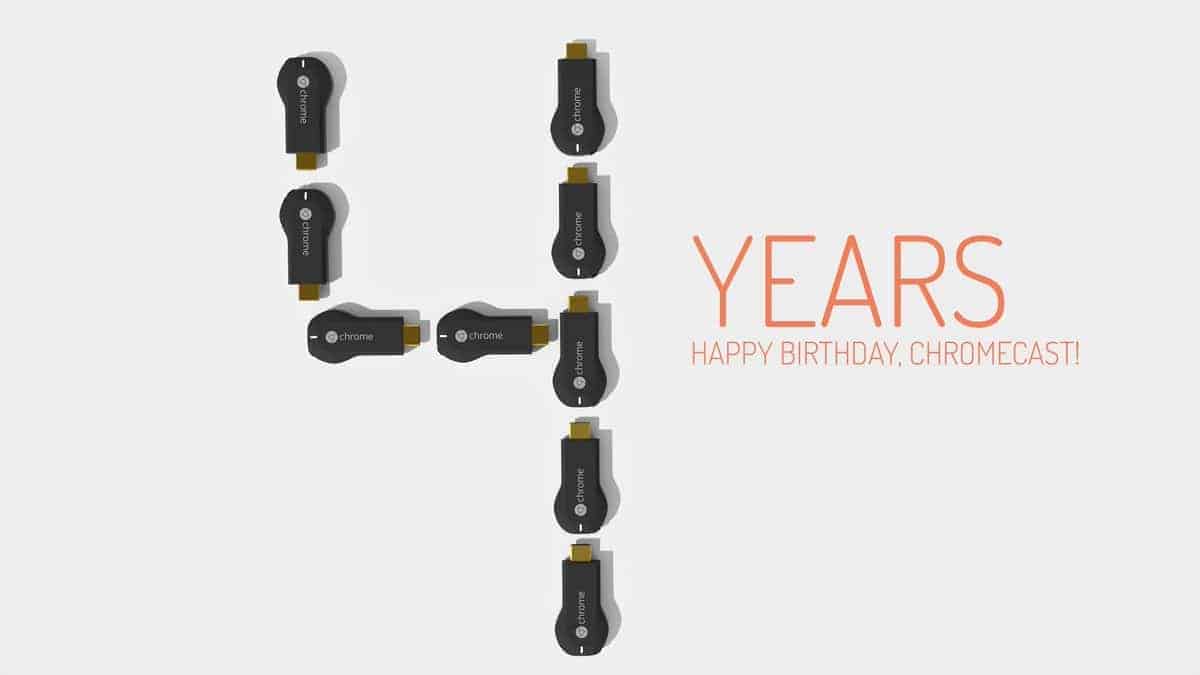 Google’s Chromecast, one of the most popular device to device media streaming options in the world, is celebrating its fourth birthday. The very fist edition of the Chromecast hit the market on July 24th back in 2013. In the intervening four years, Chromecast has manifested itself in new generations of devices, as well as the ultra-premium Chromecast Ultra, and music-focused Chromecast Audio. On top of that, Chromecast has become a standard unto itself. Known for a short while as Google Cast, Chromecast saw integration as a standard into a number of devices in a wide range of markets; PCs, TVs, game consoles, tablets, smart speakers, and more all got Chromecast integration over the years, leading to the device going from a single niche device to a standard and then to a whole ecosystem.

Google simply posted about the birthday on Made By Google, one of the company’s Twitter accounts, and has not announced any special plans for the date at this time. It’s quite possible, of course, that Google is holding off on doing anything special until next year, which will mark Chromecast’s fifth anniversary. There have been a number of sales and promotions, involving everything from discounting Chromecast devices to including special bonuses, such as extended free trials for both third-party services like HBO, and Google services like YouTube Red.

July 24th, 2013 marked a turn for the in-home streaming market. Google essentially single-handedly abolished lengthy, complicated setup processes and the need for specialized, hard to use hardware and software. Chromecast started out as a simple way to watch any content from your phone on a TV or a PC monitor, but over time, it became a universal, one-click solution for streaming from device to device in a home. The release of the Chromecast was indeed monumental, but it actually wasn’t the only major thing to happen that day. On that same day in Google history, Google was holding its first ever Geo For Higher Ed summit, where the company got together with enthusiasts, educators, and tech industry movers and shakers alike to discuss the applications of geographic technology like GPS and positional tracking in education.