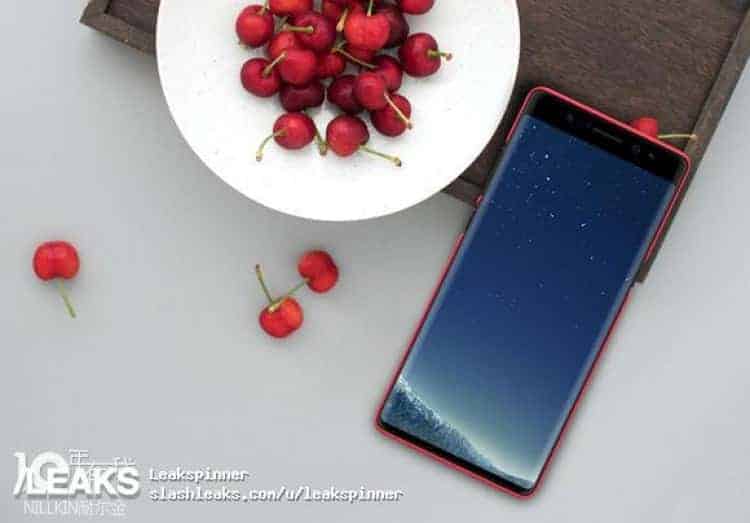 The Galaxy Note 8 is expected to arrive next month, and two new renders have just surfaced. Now, do keep in mind that these renders have been shared by a Chinese case manufacturer, so it is possible that these are only concept renders, and nothing more than that. In any case, this Galaxy Note 8 design is somewhat different than all the other designs that leaked in the last couple of weeks, read on.

As you can see, this phone's bezels are really thin, well, except for its top bezel, which is quite thick actually. The bottom bezel, however, is considerably thinner than the one included on the Galaxy S8 and the Galaxy S8 Plus, which is quite interesting. The display on this device is considerably curved on the sides, and the Bixby button is placed on the left-hand side of the device, as expected. Now, if we flip the phone over, we'll get to see its dual camera setup, and the rear-facing fingerprint scanner, in-between which you'll notice an LED flash and what seems to be a heart rate sensor or something of the sort. The case that this phone is in seems to have a cutout for both the S Pen stylus and the 3.5mm headphone jack on the bottom. Having said that, this Galaxy Note 8 design is quite odd and sketchy, to say the least, chances are that several other images that leaked recently are more accurate than this one, as Samsung probably will not include such a hefty bezel above the display, nor will the Galaxy Note 8's display be curved to this degree.

Samsung's CEO basically confirmed that the Galaxy Note 8 will launch in August, though we're still not sure what date will that happen on. In any case, the Galaxy Note 8 will ship with the S Pen stylus, and it will resemble the Galaxy S8 and the Galaxy S8 Plus, but it will be somewhat different in terms of the general shape it seems, it will come with sharper corners. The Galaxy Note 8 is expected to sport a 6.3-inch QHD+ Infinity display which will come with an 18.5:9 aspect ratio, and the device will probably pack in 6GB of RAM and 64GB of native storage. The Exynos 8895 SoC will fuel this phablet in some markets, while the Snapdragon 835 will be in charge of fueling the phone in some other regions. Android Nougat will come pre-installed on the Galaxy Note 8, and you'll get Samsung's feature-packed skin on top of it.