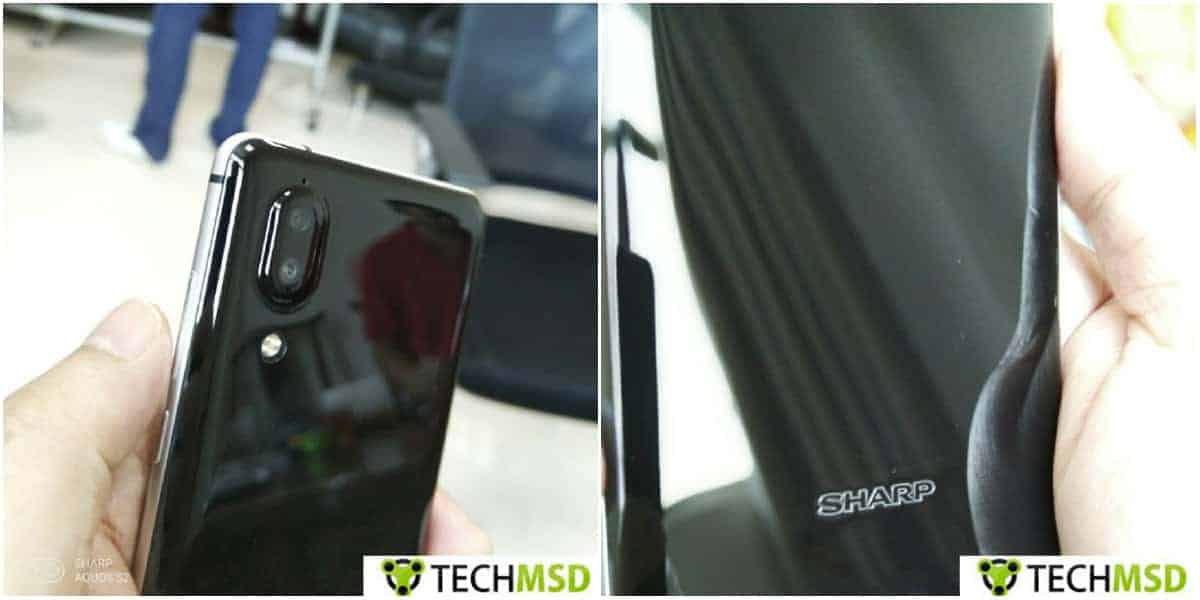 Sharp is rumored to introduce a number of 'bezel-less' smartphones this year, and the Sharp Aquos S2 has just popped up. This smartphone comes with a metal frame, and a glass back it seems, while you will also notice a vertical dual camera setup on its back. Below those camera sensors lies an LED flash, and those two cameras actually protrude on the back a bit, which is easily noticeable in the first image down below. Unfortunately, we do not get to see the front side of this phone today, but its front side did leak a couple of days ago.

Now, if a recent leak is to be believed, the Sharp Aquos 2 will resemble the Essential PH-1, when the design of its front side is concerned. Glass on top of this phone's display will be slightly curved, and the phone will basically not sport any bezel around its display or at least those bezels will be extremely thin. Now, if rumors are to be believed, this phone will ship with an in-display fingerprint scanner, and it will be available in Gold and Black color variants, at least those two models surfaced recently. Its display is expected to come with an 18:9 aspect ratio, which is the aspect ratio of LG G6's Full Vision display, in case you didn't know that. The power / lock key, volume up and volume down buttons will be included on the right-hand side of this phone, which probably means that we'll get a SIM card slot which is placed on the left side of the Sharp Aquos 2.

Now, as far as its specs are concerned, we're still not sure what to expect, but more info will probably surface soon. Sharp is well-known for innovative designs, the company managed to surprise everyone by releasing the Sharp Aquos Crystal way back in 2014, and the same can be said for the Aquos Xx which arrived in 2015. Sharp's devices were mainly available in Japan up until now, though Foxconn acquired Sharp a while back, and the company has announced that Sharp-branded phones will launch in China in the future as well. This actually means that we might see Sharp-branded devices outside of China as well, even though Foxconn did not confirm that just yet.