Android Nougat finally passed the ten-percent mark in Google’s latest snapshot of Android version distribution numbers, with the latest stable family of its ubiquitous operating system now running on 11.5 percent of all active Android devices on the planet. The distribution breakdown that can be seen below this writing pertains to data collected during a seven-day period ending yesterday, the Alphabet-owned company said. Nougat hit the stable channel almost 11 months ago but was still only running on 9.5 percent of all active Android devices as of last month. The slow adoption rate of Nougat isn’t anything out of the ordinary for the operating system, with most of Google’s major iterations of Android being sluggish to expand to a significant percentage of the market. Many entry-level and even some mid-range smartphones and tablets never receive major OS upgrades from their makers, and some original equipment manufacturers (OEMs) are even unhurried or otherwise slow to roll out such updates to their high-end offerings.

As expected, Android 7.0 still amounts for the vast majority of all Nougat-powered smartphones, tablets, and other compatible devices, with the version 7.1 currently making up for less than one percent of the entire ecosystem. The same can be said for both Gingerbread and Ice Cream Sandwich which are present on 1.4 percent of all currently active Android devices combined. Jelly Bean recently dropped below the ten-percent mark but is now losing market share in a less speedy manner, with Google still finding it on more than eight percent of all active devices. Marshmallow continues to be the most popular version of the OS on the planet, accounting for almost one third of the entire ecosystem and being closely followed by Lollipop which is still hanging over the 30-percent mark.

No major changes in terms of Android distribution are expected until this fall, with most OEMs already getting their major phone releases for the first three quarters of 2017 out of the way and sales of new devices — traditionally the largest vehicles of change in terms of Android distribution — slowing down over the summer. Android O is currently in its third developer preview and is scheduled to receive its near-final system images in the next few days, though that particular build of the OS will likely be just as slow to roll out to new devices as Nougat was and still is. 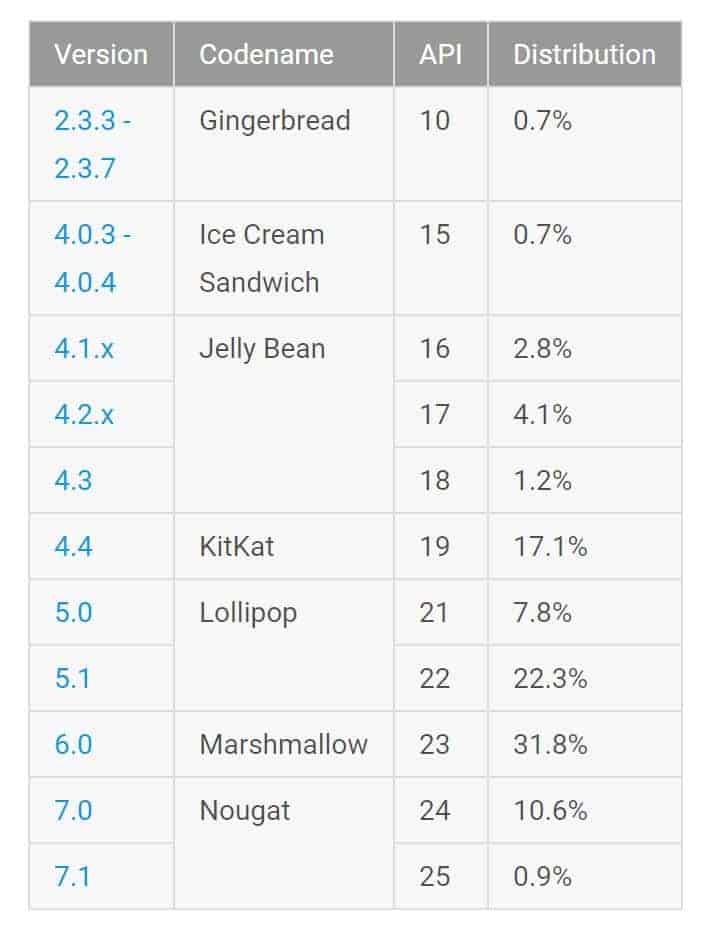