The YotaPhone 3 has been recently spotted in the database of GFXBench where the smartphone is identified by the model number “Yota Y3”. Some of the smartphone’s characteristics have now been reconfirmed by the benchmarking tool, including the Qualcomm-made system-on-chip (SoC) fueling a 5-inch display, and the presence of Android 7.1.1 Nougat. Furthermore, GFXBench reveals 4GB of RAM and 64GB of on-board memory out of which 51GB are available to the user; however it should be reminded that the manufacturer already confirmed a second variant of the device, which will carry 128GB of storage instead.

According to the benchmarking tool, the YotaPhone 3 will be equipped with a system-on-chip housing eight ARM Cortex-A53 CPU cores clocked at up to 2.0GHz, and an Adreno 506 graphics chip. Although GFXBench doesn’t mention the exact name of the chipset, these characteristics along with previous rumors strongly suggest that the smartphone is most likely powered by a Snapdragon 625 SoC. Other details revealed by the source include a 12-megapixel main camera with 4K (3840 x 2160) video recording capabilities, HDR photo, autofocus, and face detection, as well as a 12-megapixel front-facing shooter. The YotaPhone 3 is also equipped with a gyroscope, a compass, accelerometer, GPS and Bluetooth connectivity, but seems to lack NFC capabilities.

GFXBench hasn’t revealed much else about the YotaPhone 3, nevertheless, the device will most likely follow in its predecessors’ footsteps and employ a secondary 5.2-inch E-ink display on the back panel, which is rumored to accommodate a 1280 x 720 resolution. The device is also expected to carry a front-facing fingerprint sensor and is likely to be powered by a 3,200mAh battery. The YotaPhone 3 has been officially scheduled to enter a pre-order period this summer, and the Russian manufacturer already confirmed that the smartphone’s launch prices will range from $350 for the 64GB model to $450 for the variant with double the amount of on-board storage. As yet an exact launch date has not been revealed, however seeing that the YotaPhone 3 is now being tested on popular benchmarking platforms such as GFXBench, it’s evident that the manufacturer is preparing the device for market release. More details on the handset’s availability will hopefully be revealed in the coming days or weeks. 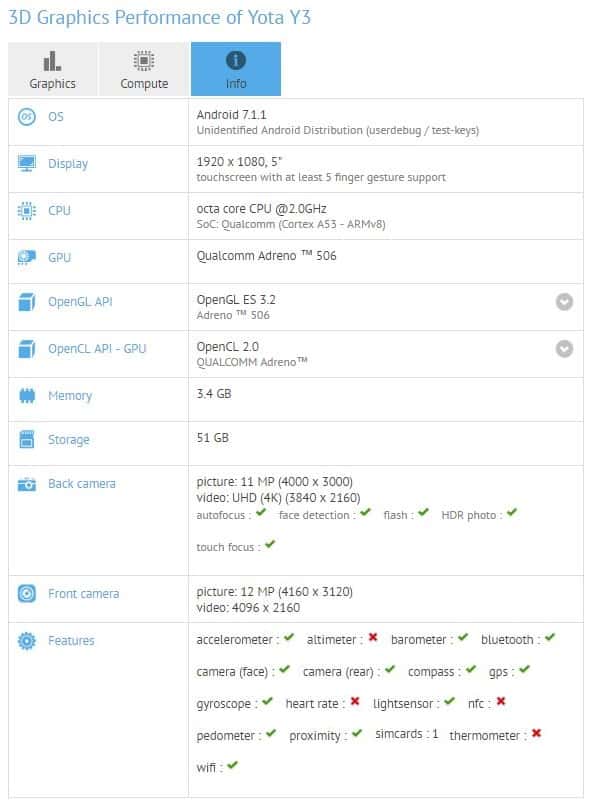