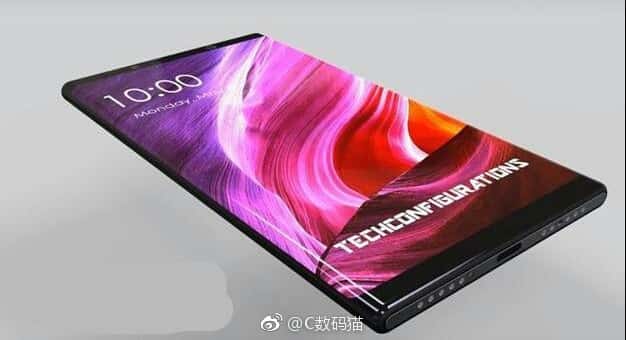 The Xiaomi Mi MIX was one of the most interesting smartphones of last year, mainly due to its design, and a concept design of its successor has just surfaced. If you take a look at the provided images in the gallery down below, you’ll get to see three newly-leaked renders of the Xiaomi Mi MIX 2 concept phone. This is definitely just a concept design, it’s easily noticeable based on these images, especially considering that the device has the ‘TechConfigurations’ tag on its display.

In any case, this device looks quite sleek, it has some bezel above and below the display, while it’s completely bezel-less on the sides. Its display is curved, and it comes with a Type-C USB port on the bottom. The traditional earpiece is placed above the display on this phone, which was not the case with the original Xiaomi Mi MIX. The phone seems to be made out of metal and glass, though we don’t get to see its back, so who knows. The design of this phone seems to be completely symmetrical, and its loudspeaker is placed on the bottom. The volume up, volume down and power / lock keys are placed on the right-hand side of the device, and we don’t really get to see its left side properly, but chances are that a SIM tray is located there. The Xiaomi Mi MIX 2 will probably look considerably different than this phone, and probably won’t ship with a traditional earpiece above the display, the Xiaomi Mi MIX set up a certain standard and design language, so Xiaomi will probably try to keep in that line and simply build on it, but we’ll see.

The Xiaomi Mi MIX 2 is expected to arrive in Q4 this year, and it is expected to sport a display which is larger than 6 inches, while it will probably be fueled by the Snapdragon 835, as its predecessor shipped with the Snapdragon 821. The Xiaomi Mi MIX 2 will include either 4GB or 6GB of RAM on the inside, though it’s possible that Xiaomi will decide to release two variants of the phone. The device will probably be made out of metal and glass or ceramic and glass, and the company had already confirmed that it will come with an even higher screen-to-body ratio.