An upcoming device, the Samsung Galaxy A4 2017 has been leaked online by the Chinese social media site, Weibo after Wi-Fi certification for the handset was granted. The leak has confirmed some details about the device, which apparently has the model number SM-A450F, although other details such as the type of processor the device will be running aren’t mentioned. According to the Weibo leak, it is thought that the design of the device will be visually very similar to the Samsung Galaxy A3 2017 series and, in addition can also can be likened to the upcoming Galaxy J7 2017.

The Galaxy A4 2017 will feature a fingerprint reader mounted on the front of the device, similar to the one found on the Galaxy A3 series. It’s thought that the power behind the handset may be provided by a large 3o00 mAH battery, along with USB Type C support. In addition, Samsung fast charging will also more than likely be supported. No details were provided about the front camera on the device, although it is known that the camera on the reverse of the device will be a 13MP camera with F/1.9 aperture. As already mentioned, the documentation that was seen by Weibo does not give any details about the type of processor that will go into the device, although it is very possible that it will include a Samsung Exynos CPU. These entry level chipsets have a quadcore processor and support screens up to 720p. It is thought that the upcoming handsets will have a 5 inch Super AMOLED full HD display and will have NFC capabilities. The device will ship with Android Nougat 7.1 and will also be running the Samsung Experience UI. This interface was formerly known as TouchWiz. until the South Korean tech giant rebranded its signature Android UI in December of last year. This UI is also a feature of the Samsung Galaxy S8.

In addition to all of these features, Weibo also says that the upcoming smartphone may come with 3GB of RAM, as well as 32GB of internal storage. The storage can be further expanded up to 256GB using a micro SD card. As yet, there has been no confirmation of when the leaked device may be available to buy. 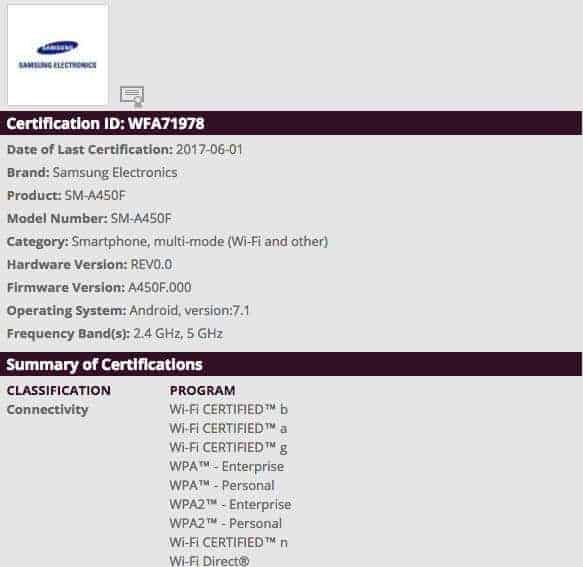