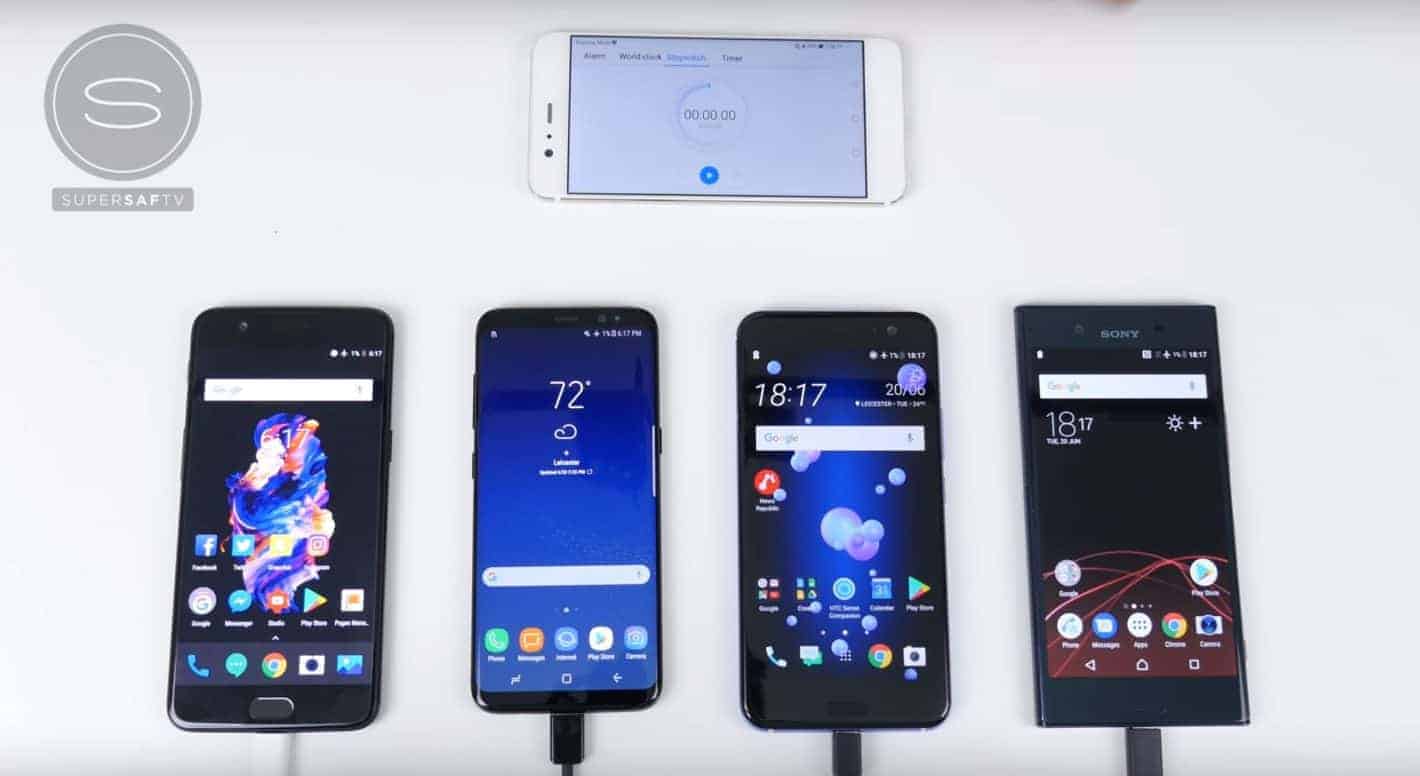 The Dash Charge technology of the OnePlus 5 has been touted as one of the main selling points of the recently announced device, and a new video test published by YouTube channel SuperSaf TV indicates that the Chinese phone maker truly made one of the fastest-charging handsets to date, with the OnePlus 5 comfortably beating a number of other Android flagships released earlier this year. The clip that can be seen beneath this writing is relatively simple in nature, showing the OnePlus 5 take on the Samsung Galaxy S8, HTC U11, and the Xperia XZ Premium in a straightforward charging test to see who can get to 100 percent first. All devices were connected to their stock chargers with one percent of battery left, plugged into identical outlets. The author of the test also opted to enable Airplane Mode on all four units in an effort to prevent unexpected updates that could impact end scores.

After just over 30 minutes, the OnePlus 5 was at 59 percent, followed by the HTC U11 and Xperia XZ Premium at 43 and 41 percent, respectively. The Galaxy S8 was by far the worst performer in the first half an hour, having only reached 36 percent of its full battery capacity. Samsung’s flagship picked up the pace in the next 30 minutes, reaching 72 percent after an hour and leaving behind Sony’s offering that was at 69 percent at that point. The HTC U11 was at 79 percent after 60 minutes of charging that saw the OnePlus 5 reach 92 percent of its battery capacity. The Chinese smartphone was ultimately the first one to hit 100 percent, accomplishing that feat in just over 88 minutes, with the Galaxy S8 doing the same 13 minutes later. HTC’s new high-end phone was only three minutes behind the Galaxy S8, having charged to 100 percent after an hour and 44 minutes. The Xperia XZ Premium reached 90 percent soon after but ultimately took two hours and 40 minutes to go from one to 100 percent due to its smart charging technology that stops the handset from charging after 90 percent and only resumes the cycle when it expects the phone to be picked up soon in an effort to minimize battery degradation and improve its overall longevity.

The OnePlus 5 is the clear winner of the test, especially since it’s powered by the largest battery of the three, boasting a capacity of 3,300mAh. For added context, the HTC U11 and Galaxy S8 feature 3,000mAh units, while the Xperia XZ Premium ships with a 3,230mAh battery.