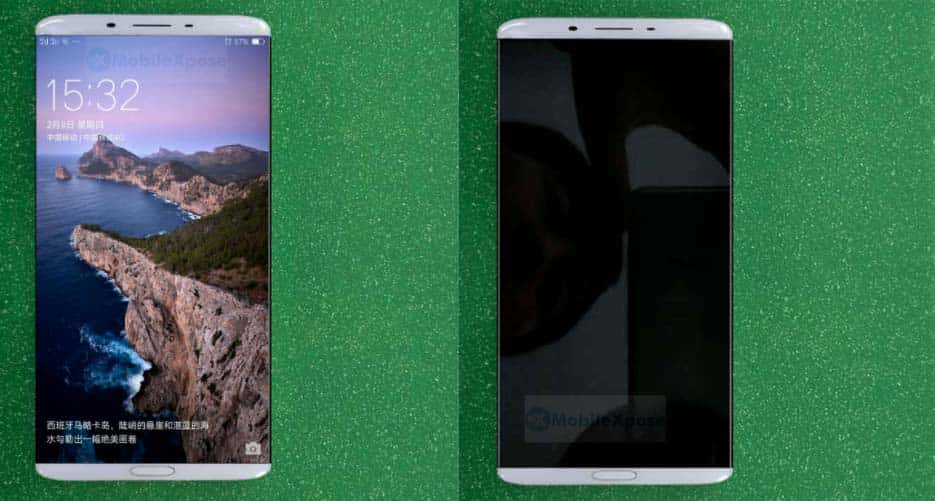 Two new renders depicting a device that’s said to be the upcoming OPPO Find 9 have surfaced online on Saturday, exactly one month after some other supposed depictions of the handset have been spotted on the World Wide Web. Much like the previously sighted device, the one that can be seen in the two renders above this writing boasts extremely thin top and bottom bezels, in addition to featuring virtually no side bezels. The viewing angle might even suggest that the alleged OPPO Find 9 boasts a curved display panel that wraps around the longer edges of its body, though that likely isn’t the case and the phone simply has an edge-to-edge screen.

In contrast to what some previous leaks have suggested, the newly uncovered images indicate that the upcoming OPPO Electronics-made device might sport a physical Home button on its bottom bezel despite having little space to accommodate such a key. The button presumably houses a standard fingerprint scanner, though it’s debatable whether the shape of the sensor would affect its suitability for everyday use. According to older rumors, the OPPO Find 9 is said to be powered by the Snapdragon 653, Qualcomm’s mid-range system-on-chip (SoC) that was introduced in late 2016 alongside the Snapdragon 427 and Snapdragon 626. The handset is also said to boast 4GB of RAM and 64GB of internal storage space that will presumably be expandable via a microSD card slot. Other key specs of the smartphone include a 21-megapixel main camera and a 16-megapixel sensor embedded into the top bezel of the device, as well as a 4,100mAh battery that likely won’t be removable.

The Chinese original equipment manufacturer (OEM) is reportedly considering releasing a more premium OPPO Find 9 model with the Snapdragon 835, 6GB of RAM, and 128GB of flash memory, though no other details on the matter have been revealed by industry insiders so far. According to previous reports, the OPPO Find 9 is scheduled to be launched at some point this year. The Dongguan, China-based phone maker hasn’t released a new addition to its Find product family since mid-2014 and the OPPO Find 7 and Find 7a, instead choosing to focus on other lineups like its F, A, and R series of handsets.