A Sharp-made device bearing the model number FS8016 appeared in the database of popular mobile benchmark AnTuTu earlier today, with its listing suggesting that the smartphone sports a display panel with a resolution of 2040 by 1080 pixels, amounting to an unconventional aspect ratio of 17:9. Other details revealed by AnTuTu that can be seen screenshotted beneath this writing include 4GB of RAM and the Snapdragon 660 system-on-chip (SoC), Qualcomm’s latest mid-range piece of silicon that was unveiled in early May, sporting the Adreno 512 GPU and eight Kyro 260 cores clocked at a maximum frequency of 2.2GHz. The existence of Qualcomm’s new chip inside the Sharp FS8016 also reveals that the smartphone will feature LPDDR4 RAM operating at up to 1,866MHz, in addition to possibly supporting NFC and Bluetooth 5.0.

The handset was running Android 7.1.1 Nougat at the time of its testing, likely enhanced with the Japanese tech giant’s proprietary mobile software suite, with AnTuTu putting the amount of its internal flash memory at 64GB. There’s currently no indication that the Sharp FS8016 will feature a microSD card slot, though most of the company’s contemporary devices like the Sharp Z2 did so by adopting a Hybrid SIM setup wherein the second SIM slot on a dedicated tray can also be used for a microSD card. The main camera system of the Sharp FS8016 consist of a single 12-megapixel lens, its AnTuTu listing suggests, in addition to revealing that the top bezel of the phone houses an 8-megapixel module.

The very same handset already appeared on Geekbench over the weekend, with that particular listing corroborating many of AnTuTu’s findings and not contradicting the new info on the Sharp FS8016 in any aspect. Given how the Osaka, Japan-based original equipment manufacturer (OEM) likely used its own display module for the upcoming Android mid-ranger, the screen featured on the device may be the same one that shipped with last year’s Xiaomi Mi MIX that boasted a 6.4-inch IPS LCD panel with an identical resolution and aspect ratio. That module is officially labeled as the Sharp FTE716 and may have also found its way to the next Sharp-branded smartphone. More details on the FS8016 are expected to follow in the coming months. 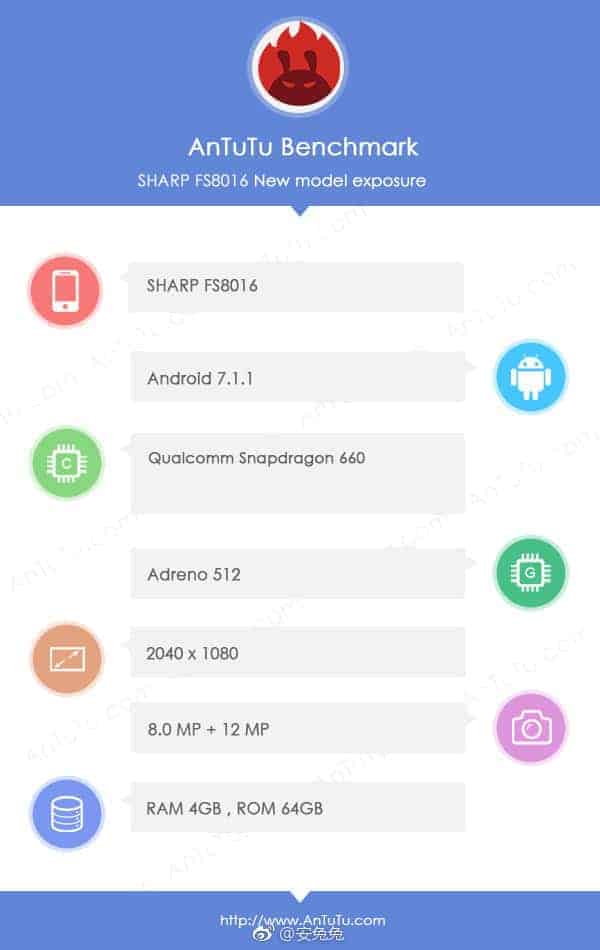