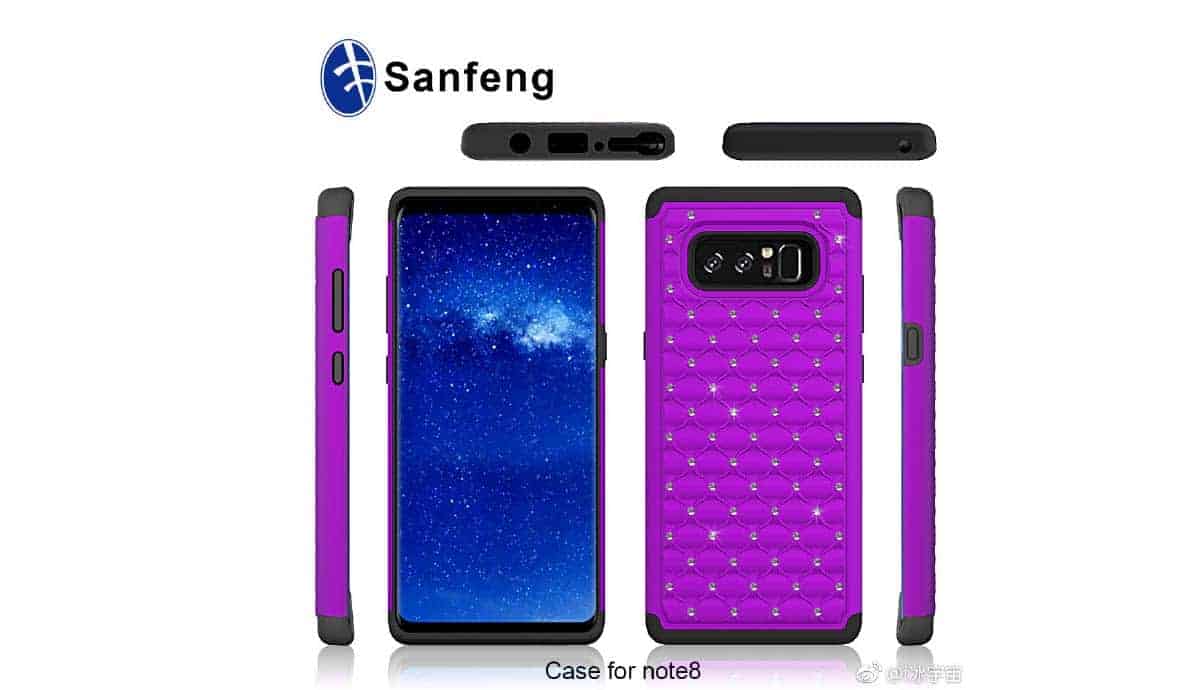 Four new renders depicting supposed protective cases for the Galaxy Note 8 leaked online on Friday, detailing not only the covers made by Chinese phone accessory manufacturer Sanfeng but also Samsung's upcoming phablet. While there's currently no way to confirm the legitimacy of the newly uncovered renders, the device they're showing is mostly identical to the one leaked by another maker of protective handset cases earlier this week. The images that can be seen in the gallery beneath this writing are thus yet another indicator that the Galaxy Note 8 will succeed the Infinity Display of the Galaxy S8 series, with its screen wrapping around the long edges of the smartphone and having an 18.5:9 aspect ratio.

The dual camera setup featured on the rear plate of the supposed Galaxy Note 8 is shown as having two horizontally arranged lenses placed to the left of a dual-LED (dual tone) flash and a heart rate monitor, with those two modules being situated in a vertical manner relative to one another. The very right side of the panel that slightly protrudes from the back of the handset houses a fingerprint reader, with the newly leaked images adding more credence to recent reports that the Galaxy Note 8 will also miss out on an on-screen scanner that was originally rumored to be included in the Galaxy S8 lineup before Samsung reportedly delayed the commercialization of its technology due to a number of technical issues. Finally, one of the recently uncovered renders suggest that the S Pen slot will be located on the left of the phone's bottom edge and not on the right as was the case before, which is a surprising design choice that casts some doubt over the legitimacy of this leak given how no industry insiders previously suggested anything of the sort.

The Galaxy Note 8 may be Samsung's most expensive flagship to date that could start at €1000 in Europe and a little over $900 in the United States, according to recent reports. While the phablet will likely be powered by the same chips featured in the Galaxy S8 and Galaxy S8 Plus, it should still provide superior performance by sporting 6GB of RAM. More details on the upcoming device that's rumored to launch in late August or early September should follow shortly.