The Samsung Galaxy A3 (2016) is reportedly being updated to Android 7.0 Nougat in Europe. The software package weighs roughly 948MB and is currently distributed for the Galaxy A3 (2016) bearing the model number “SM-A310F.” The update seems to only be available in Hungary as of right now, but it should reach other countries in the coming weeks.

Unsurprisingly, the Android 7.0 Nougat update for the Galaxy A3 (2016) is distributed over-the-air (OTA), meaning that the software package should be preceded by an update notification on eligible devices. Alternatively, Galaxy A3 (2016) owners can attempt to download and apply the software update manually by heading down to the phone’s settings menu under "About Device" and "Software Updates." Before proceeding, however, ensure the smartphone is connected to an active Wi-Fi network and that it has at least 50 percent of battery life left. Once applied, Android 7.0 Nougat should bring along improvements to performance, system stability, and battery life, as well as various other additions including reworked user interface elements. The latest software update arrives on the Galaxy A3 (2016) roughly one month after its larger sibling – the Galaxy A5 (2016) – received Android 7.0 Nougat in Europe.

The Galaxy A3 (2016) was released in January 2016 running Android 5.1.1 Lollipop out of the box and was updated to Android Marshmallow after roughly one year of market availability. Last December, Samsung confirmed that the entire Galaxy A (2016) lineup will eventually be updated to Android 7.0 Nougat by the end of 2017, and in light of recent events, it appears that the company is keen on keeping its word. The Galaxy A3 (2016) fits in the lower-mid-range market and features a 4.7-inch Super AMOLED display with a resolution of 1280 x 720 and a pixel density of roughly 312 pixels per inch. The European variant identified by the model number “SM-A310F” is powered by the Exynos 7578 system-on-chip (SoC) housing four ARM Cortex-A53 CPU cores clocked at up to 1.5GHz, and the ARM Mali-T720 MP2 (dual-core) graphics processor. The handset relies on 1.5GB of RAM, has 16GB of onboard storage expandable via microSD by up to 256GB, and is powered by a 2,300mAh battery which will now be backed by an improved Doze mode in Android Nougat. 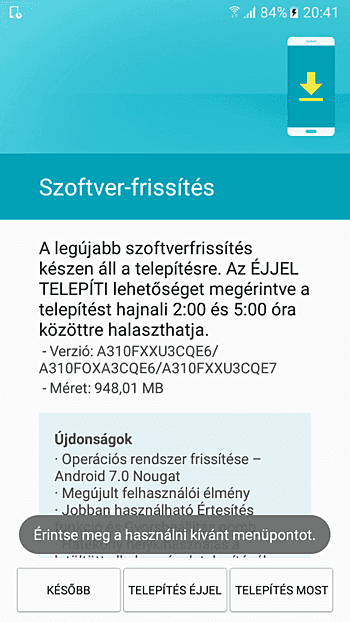