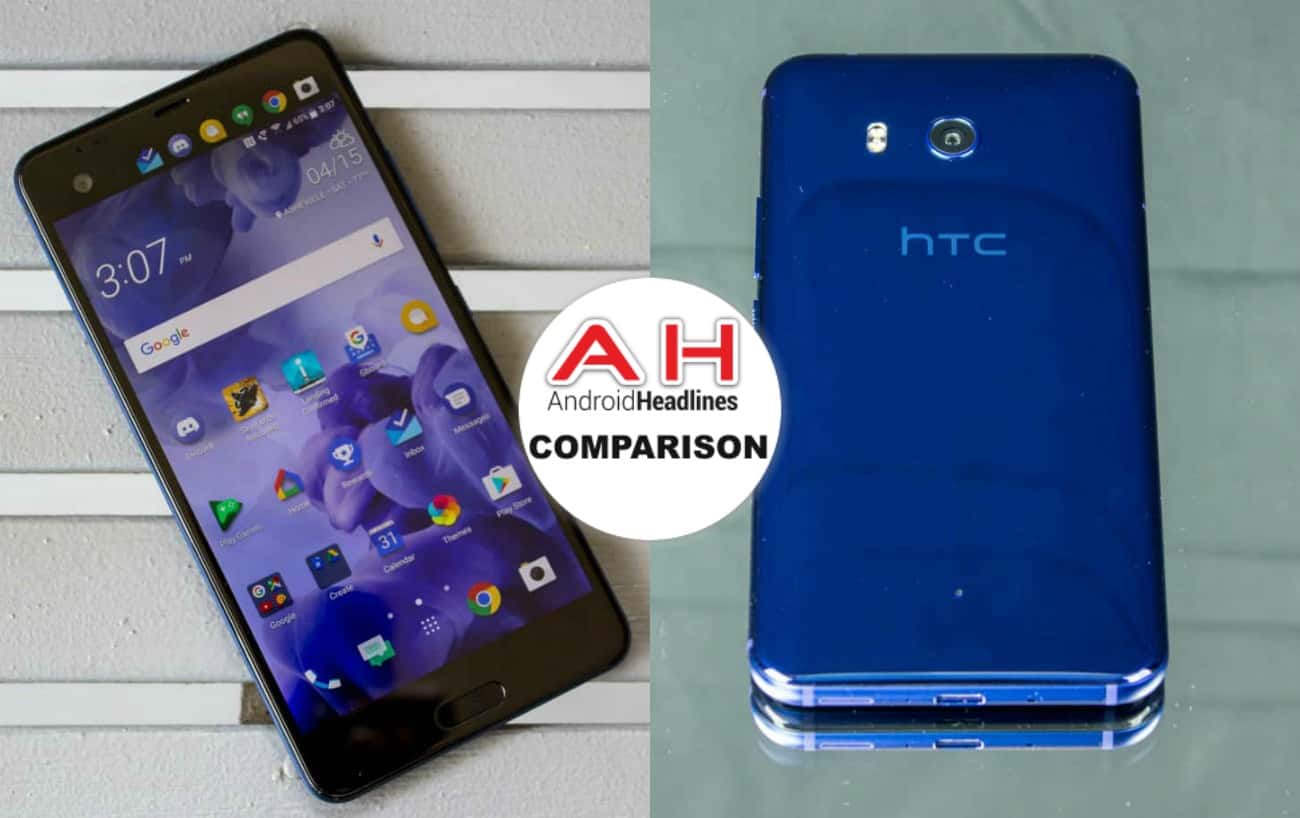 The HTC U11 officially went on sale earlier this month, but it is certainly not the only premium smartphone released by the Taiwanese tech firm this year. Back in January, the company announced the HTC U Ultra, which is also currently available for purchase from the company’s own official website in the U.S. and around the world. So if you’re in the market for a premium HTC handset and are wondering which one deserves your money, wonder no more. Today we’ll compare the two devices side-by-side in an attempt to find their pros and cons to see if we can make the decision a bit easier for you. Both the U Ultra and the U11 come with HTC’s all-new ‘Liquid Surface’ design language and include some really high-end hardware, but only one can emerge as the winner in our head-to-head. So which one is it? Let’s find out! 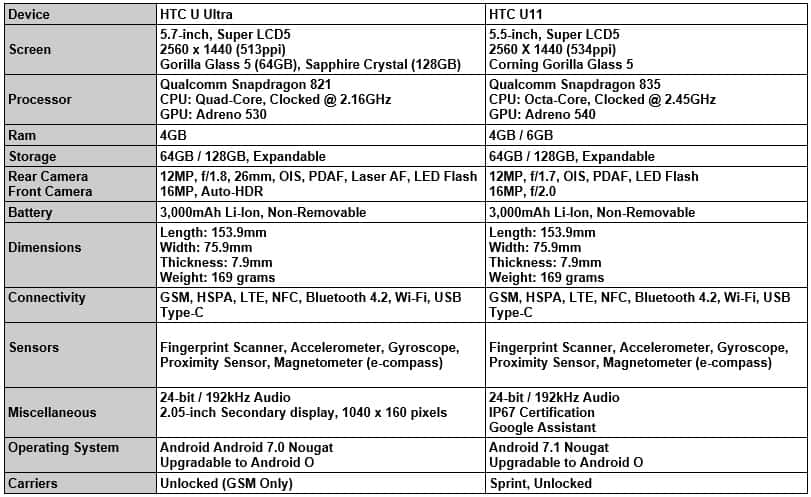 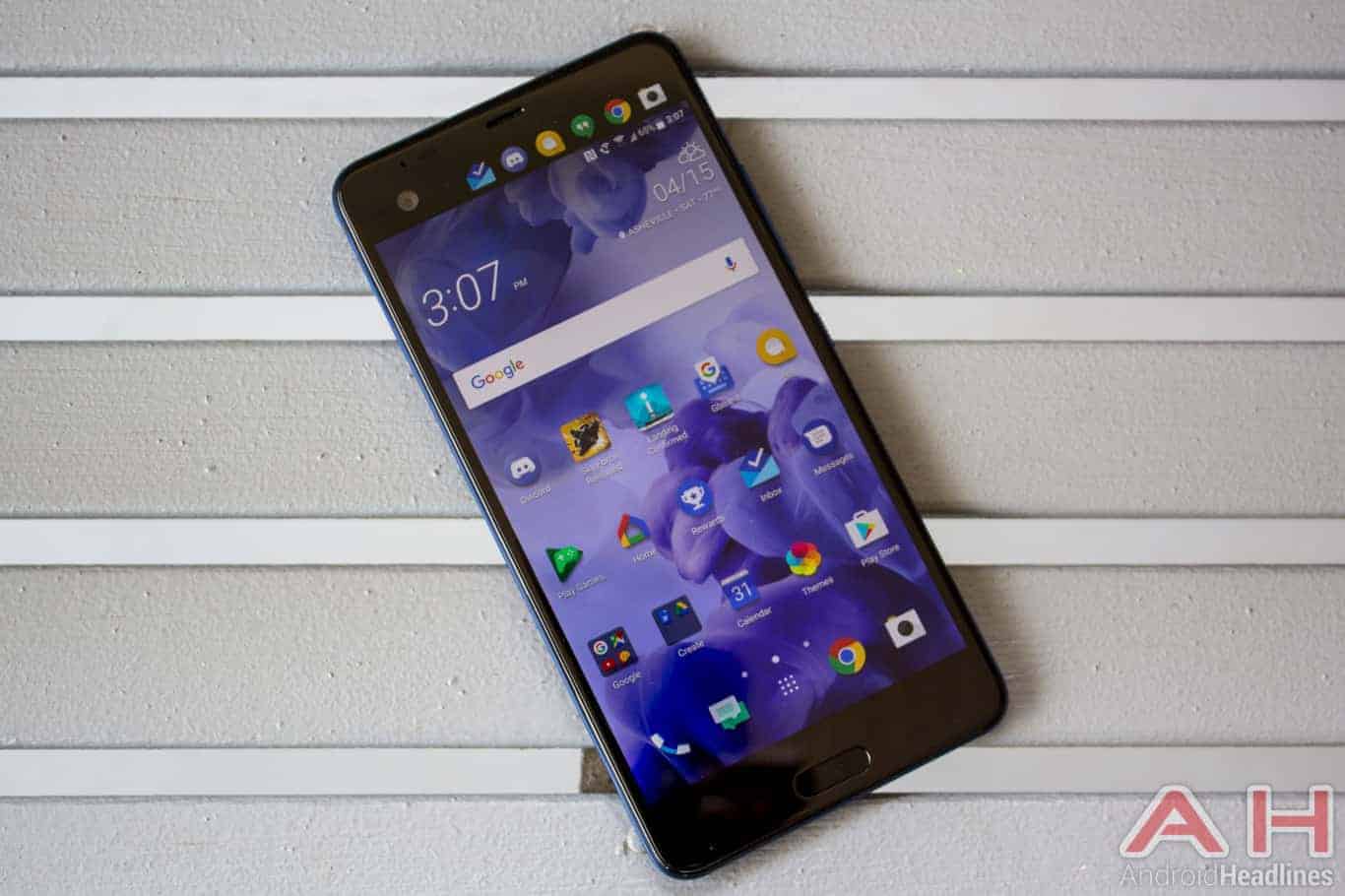 The HTC U Ultra is a large-screen phablet that the Taiwanese company announced back in January this year. It’s one of the very few devices in the market alongside the likes of the LG V20 to feature an additional ticker display on top. While the primary display is a 5.7-inch Super LCD5 capacitive touchscreen with a resolution of 2560 x 1440 pixels, the smaller, secondary screen on top measures 2.05-inches diagonally, and has a resolution of 1040 x 160 pixels. Like the secondary display on the LG V20, this one also displays notifications and allows quick access to most used apps. The screen protection depends on the variant, so while the 64GB model is protected by Corning’s Gorilla Glass 5, the 128GB version is protected by Sapphire crystal glass.

Both versions, however, come with pretty much identical hardware otherwise, including the Qualcomm Snapdragon 821 SoC that powers the device with its integrated quad-core CPU and Adreno 530 GPU. While two of the four CPU cores are clocked at 2.16GHz, the other two are clocked nominally lower at 2.15GHz. Both versions of the device come with 4GB of RAM and have expandable storage by way of a hybrid microSD slot that also doubles up as a second SIM slot when needed.

Imaging options on the HTC U Ultra include a single 12-megapixel rear-facing camera with an f/1.8 aperture, 26mm focal length, optical image stabilization, laser autofocus, PDAF, and a dual-tone LED flash. The camera also has a 1/2.3-inch’ sensor size and 1.55µm pixel size, with software features like, geo-tagging, touch focus, face detection, auto-HDR and panorama. It can shoot 4K videos at 30fps and 720p videos at a rapid 120fps. As for the front-facing selfie-cam, the HTC U Ultra offers a 16-megapixel sensor that can record 1080p videos at 30fps, which is standard for most devices these days.

The HTC U Ultra also comes with a whole host of sensors, as is to be expected from devices at this price-point. The list includes a front-mounted fingerprint scanner integrated into the physical Home button, an accelerometer, a gyroscope, a proximity sensor, an ambient light sensor and a magnetometer (e-compass). The device supports 4G LTE, 3G HSPA and 2G GSM cellular signals, while other connectivity options include dual-band Wi-Fi 802.11 a/b/g/n/ac, Wi-Fi Direct, DLNA and Bluetooth 4.2. Like many new smartphones, the HTC U Ultra also includes USB Type-C connectivity and gives the 3.5mm audio port a miss. It also carries a non-removable 3,000mAh Li-ion battery with support for Qualcomm’s Quick Charge 3.0 standard. The device comes with Android 7.0 Nougat pre-installed, and measures 162.4mm in length, 79.8mm in width and 8mm in thickness while weighing in at a rather hefty 170 grams. 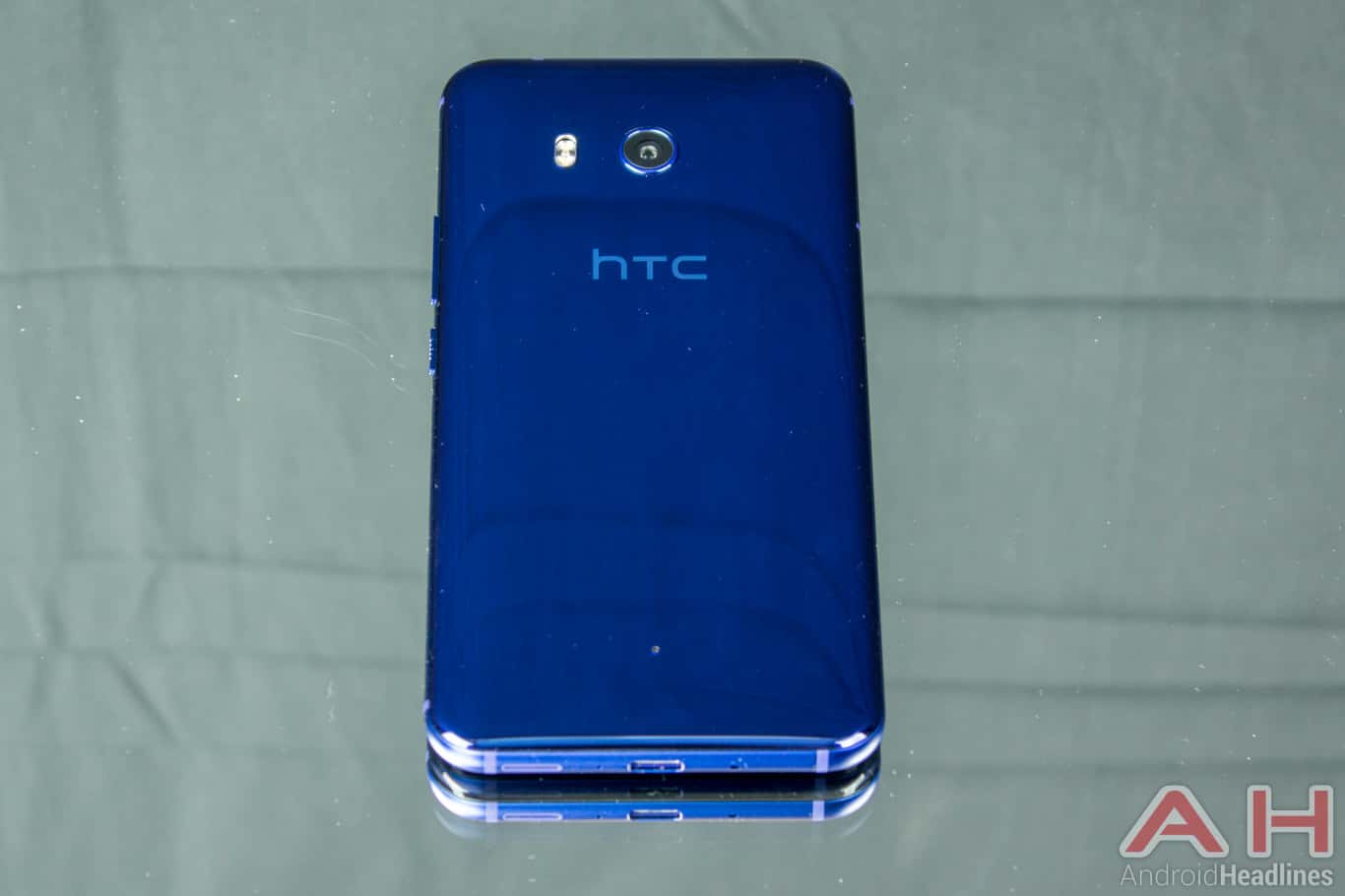 The HTC U11 is the latest flagship smartphone from the beleaguered Taiwanese tech company that was once the main driving force behind the popularity of Android, but has since lost both market share and mindshare to its fellow Asian rivals from South Korea and China. The company will be desperately hoping that its two releases this year will be able to bring it back to profitability, but it won’t be an easy task against the likes of the LG G6 and the Xperia XZ Premium, not to mention the market leaders from Samsung (Galaxy S8) and Apple (iPhone 7 Plus). The U11, however, is a really noteworthy device, seeing as it comes with not just a striking design, but also cutting edge hardware components and novel software features that are sure to catch the eye of buyers looking to stand out from the sea of iPhones and Galaxys around them.

The U11, like other HTC smartphones of recent vintage, features a glossy ‘Liquid Surface’ design that makes it stand apart from many of its competitors. The phone is also one of the first mainstream third-party devices to ship with Google Assistant on board, but the showstopper is definitely the much talked-about ‘Edge Sense’ feature that allows users to squeeze the sides of the device to interact with the phone in a number of different ways. Edge Sense supports both long and short squeezes, and by default, it launches Google Assistant with a long squeeze and fires up the camera with a short one. However, since Edge Sense is customizable, users can change what the squeezing does, so you may use either a long or short squeeze to turn on the flashlight, start an audio recording, or just launch Google Maps for navigation. The company is also expected to push through an update that will expand the Edge Sense functionality massively by enabling users to assign different functions to each squeeze, depending on the app they’re in.

In terms of hardware, HTC has stuck to a traditional 16:9 aspect ratio for the display panel on the U11 instead of going the way of Samsung and LG. The device features a 5.5-inch WQHD (2560 x 1440) Super LCD5 capacitive touchscreen display that’s protected by Corning’s Gorilla Glass 5. It is powered by the Qualcomm Snapdragon 835 SoC and is offered in two different versions – one with 4GB of RAM and 64GB of storage and another with 6GB of RAM and 128GB of storage. Both versions support microSD cards of up to 256GB in capacity. The device comes with an USB Type-C port for charging and data syncing, but just like the U Ultra, misses out on the 3.5mm audio port. The handset ships with a 3,000mAh Li-Ion battery with support for Quick Charge 3.0, while sensors include a front-mounted fingerprint scanner, accelerometer, gyroscope, proximity sensor and magnetometer (e-compass).

In terms of optics, the HTC U11 comes with a 12-megapixel primary camera with the company’s proprietary UltraPixel 3 and UltraSpeed Autofocus technologies. The camera has an f/1.7 aperture, a 1/2.55-inch sensor, phase detection autofocus (PDAF), optical image stabilization (OIS) and a dual tone LED flash. Software features include geo-tagging, touch focus, face detection, HDR and panorama. The camera can record 4K videos at 30fps and 1080p videos at up to 120fps. The front-facing selfie-cam on the HTC U11 is a 16-megapixel unit that can record 1080p videos at 30fps. The HTC U11 measures 153.9mm in length, 75.9mm in width and 7.9mm in thickness, while weighing in at 169 grams. The device also comes with an IP67 certification, which means it is waterproof and dust-resistant.

This one was a relatively easy one, to be honest. While both devices have their own pros and cons, the HTC U11 is not only the faster, more well-rounded smartphone overall when compared to its stable-mate, it also comes with novel features like Edge Sense that helps it stand out from the crowd of premium handsets, all with similar hardware vying for customers’ attention. HTC is certainly going all-out to woo smartphone buyers and one can only hope the company will be successful in its endeavor. However, HTC will need to sort out its relationship with carriers in the U.S. if it has any chance of regaining its lost glory. As things stand now, Sprint is the only operator in the country carrying the device on its network, and that’s just not good enough if they’re looking to give other top OEMs a run for their money. HTC has started making compelling devices once again, and with better negotiations with the carriers, it won’t be a surprise if the company gets back to profitability sooner rather than later.