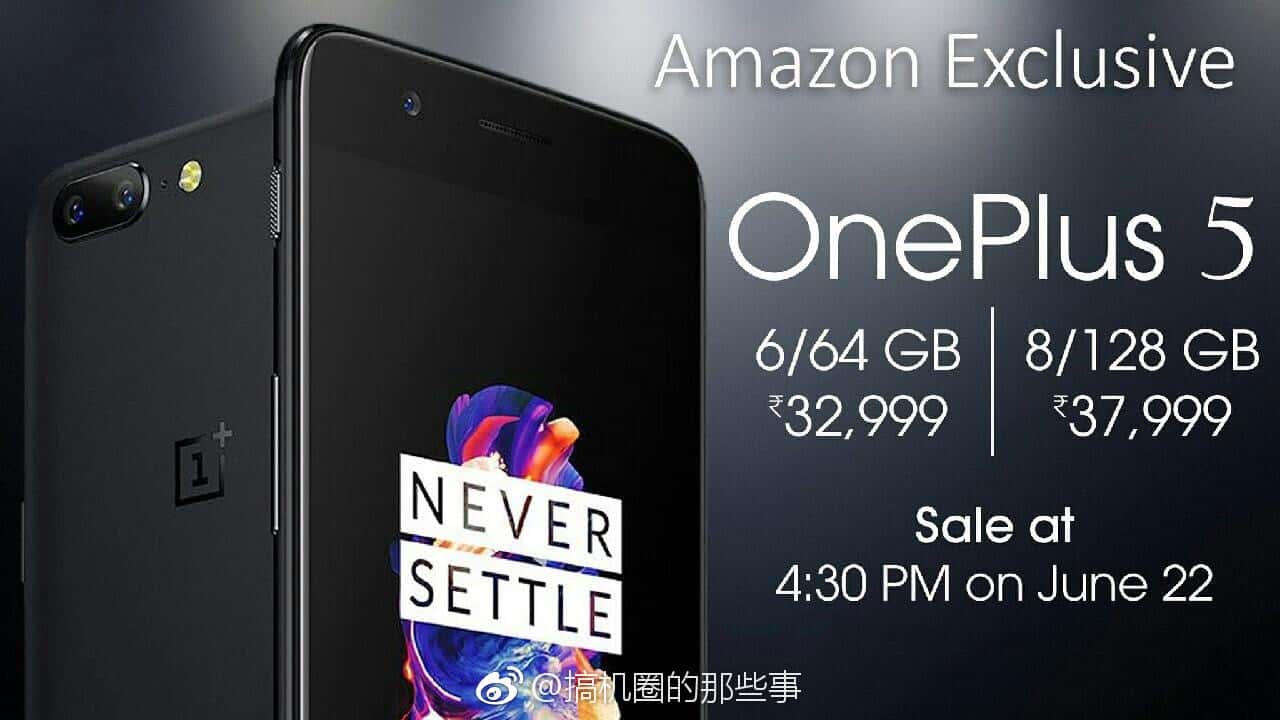 The OnePlus 5’s pricing for India leaked earlier this month, and this new leak more or less confirms that info. If you take a look at the provided image above, you will get to see the phone’s pricing for the Indian smartphone market. Prices for both 6GB and 8GB RAM models of the device are listed here, and this image actually reveals more than just the phone’s pricing. As you can see, the device will be exclusive to Amazon India, if this image is to be believed, and its (first) sale will kick off at 4:30PM on June 22nd.

That being said, the 6GB RAM model of the OnePlus 5 will ship with 64GB of storage, and will cost Rs. 32,999 ($513) in India, if this info is to be believed. The more powerful, 8GB RAM variant, will ship with 128GB of storage, and will set you back Rs. 37,999 ($590) if you’re planning to purchase it. This leak is also showing off the upper portion of the phone itself, both its front and back sides, this is actually an image we’ve seen already, and it reveals the dual camera setup on the back, along with the noise canceling microphone which is located next to it, and also an LED flash. The company’s logo is also visible in this image, and so is the phone’s alert slider, and the device’s volume rocker setup on the left. You can also see the OnePlus 5’s front-facing camera in this image, and the device’s earpiece.

The OnePlus 5 will be announced globally on June 20, and the company will do the same in Indian market two days later, if the leaked info is to be believed. The OnePlus 5 will sport a fullHD display, while it will be fueled by the Snapdragon 835 64-bit octa-core SoC, and sport a dual camera setup on the back. The device will also come with a front-facing fingerprint scanner, and a 3.5mm headphone jack. This info was already confirmed by OnePlus, and thanks to a number of rumors and leaks, we have plenty more info to share with you. The device will be made out of metal and glass, and the side of its display will be 5.5 inches it seems. A 3,300mAh battery will probably be included on the inside of this phone, and it will not be removable. Android 7.1.1 Nougat will come pre-installed on the OnePus 5, and on top of it, you’ll get the company’s OxygenOS skin. If you’d like to read more, check out our OnePlus 5 preview.