Following its listing on Geekbench, the 8GB RAM variant of the upcoming OnePlus 5 has just popped up on GFXBench as well. This listing actually adds some more info on top of what Geekbench shared, so let’s get into it. According to GFXBench, the OnePlus 5 will sport a 5.5-inch fullHD (1920 x 1080) display, which is something that OnePlus already confirmed, indirectly, but still. Now, this will probably be an AMOLED panel, even though GFXBench did not confirm that.

Qualcomm’s Snapdragon 835 64-bit octa-core processor will fuel the OnePlus 5, we already knew that because OnePlus officially confirmed it, but GFXBench now reiterates that confirmation. This means that you’ll get the Adreno 540 GPU along with this phone, and the variant of the phone that got listed on GFXBench comes with 128GB of internal storage. This probably means that the 6GB RAM variant of the phone will ship with 64GB of native storage, though that’s only an educated guess. GFXBench, unfortunately, never reveals both rear-facing sensors for devices, and we know, for a fact, that the OnePlus 5 will ship with two rear-facing cameras. GFXBench did reveal, however, that one of those cameras will come with a 16-megapixel sensor, which is something we also already knew thanks to an image OnePlus’ CEO shared recently. Now, the second camera on the back could be identical to the one that is listed on GFXBench, but there’s a chance it won’t be, we’ll have to wait and see what happens, because a setup similar to the one on the Huawei P10 had been mentioned, and that means that the device might include one RGB and one monochrome sensor on the back. A 16-megapixel camera will be included on the front side of the OnePlus 5, and the device will ship with Android 7.1.1 Nougat, with OnePlus’ OxygenOS skin on top of it, that is also something that source confirmed.

The OnePlus 5 will be announced on June 20, OnePlus’ already confirmed that, and the phone will be made out of metal. A fingerprint scanner will, almost certainly, be placed below the display, and the alert slider will be included here once again, and it will be placed on the left side of the device. That is more or less it, stay tuned, though, more info will probably surface in the coming days. 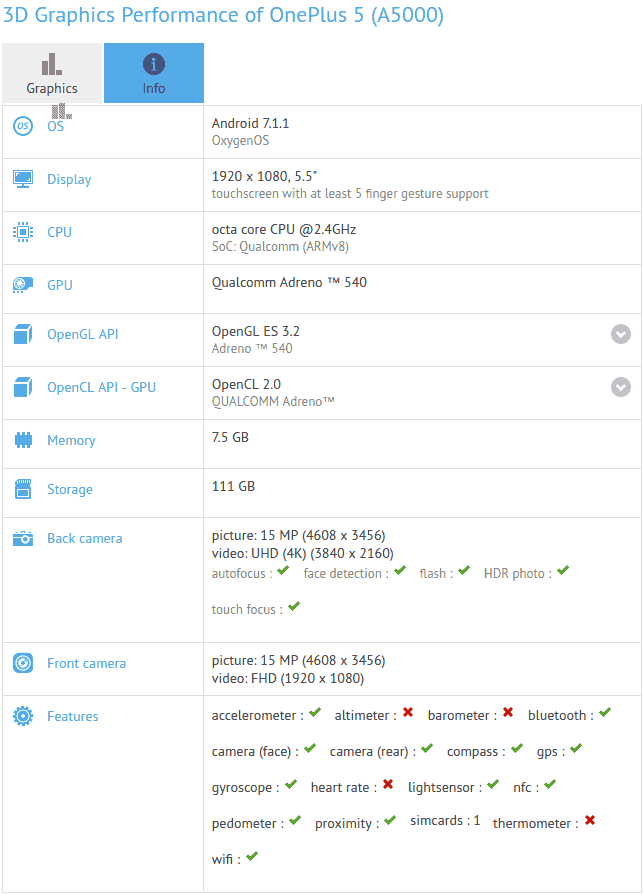