OnePlus had confirmed yesterday that the OnePlus 5 is coming on June 20, and OnePlus India just shared a similar teaser via Twitter, hinting that the phone will be officially announced in India two days later, on June 22. The device will be announced during the press conference in Mumbai, which will kick off at 2PM local time. ‘Focus On What Matters’ is OnePlus’ slogan for the OnePlus 5 launch, as you can see in the provided image, and we already have plenty of info when it comes to the OnePlus 5, read on.

OnePlus had already confirmed that the phone will sport a fullHD (1920 x 1080) display, and that it will be fueled by the Snapdragon 835 64-bit octa-core SoC, while the company indirectly confirmed a dual camera setup as well. The OnePlus 5 leaked a couple of times in the last couple of days, and we do have a pretty good idea as to what will the phone look like at this point. The back side of the phone will resemble the iPhone 7 Plus, mainly because of the dual camera setup and its design, while the phone will be made out of metal. A fingerprint scanner will be placed below the phone’s display, while the alert slider will once again be included on the left side of the device, along with the volume up and volume down physical keys. The power / lock key will be placed on the right-hand side of this smartphone, and it seems like a SIM card tray will lie there as well. The OnePlus 5 is expected to sport a 5.5-inch fullHD AMOLED display, just like the OnePlus 3(T), but the company teased that the footprint of the device will be smaller compared to the OnePlus 3(T), which are always good news.

Having said that, the device’s seemingly official image popped up yesterday as well, and it seems like the phone will sport no bezel on the sides, the display is slightly curved on the sides, and it seems like it goes from side to side with not black bars or anything of the sort. The OnePlus 5 will ship with Android 7.1.1 Nougat out of the box, and on top of it, you’ll get OnePlus’ OxygenOS, of course. The device will probably pack in 6GB or 8GB of RAM, and more than one storage variant will become available.

UPDATE: OnePlus had also announced that it will host a press conference in China as well, it will be held on June 21, at 10AM local time. You can check out the image down below for more info. Now, you’ll also notice that June 22 is also listed on that image, well, that’s because the device will become available on the said date (read more about it here). In addition to that, OnePlus India’s official YouTube channel released a promo video for the launch of the OnePlus 3T, and it is embedded down below. 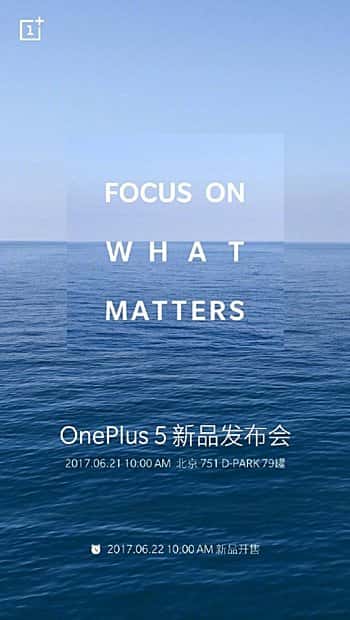