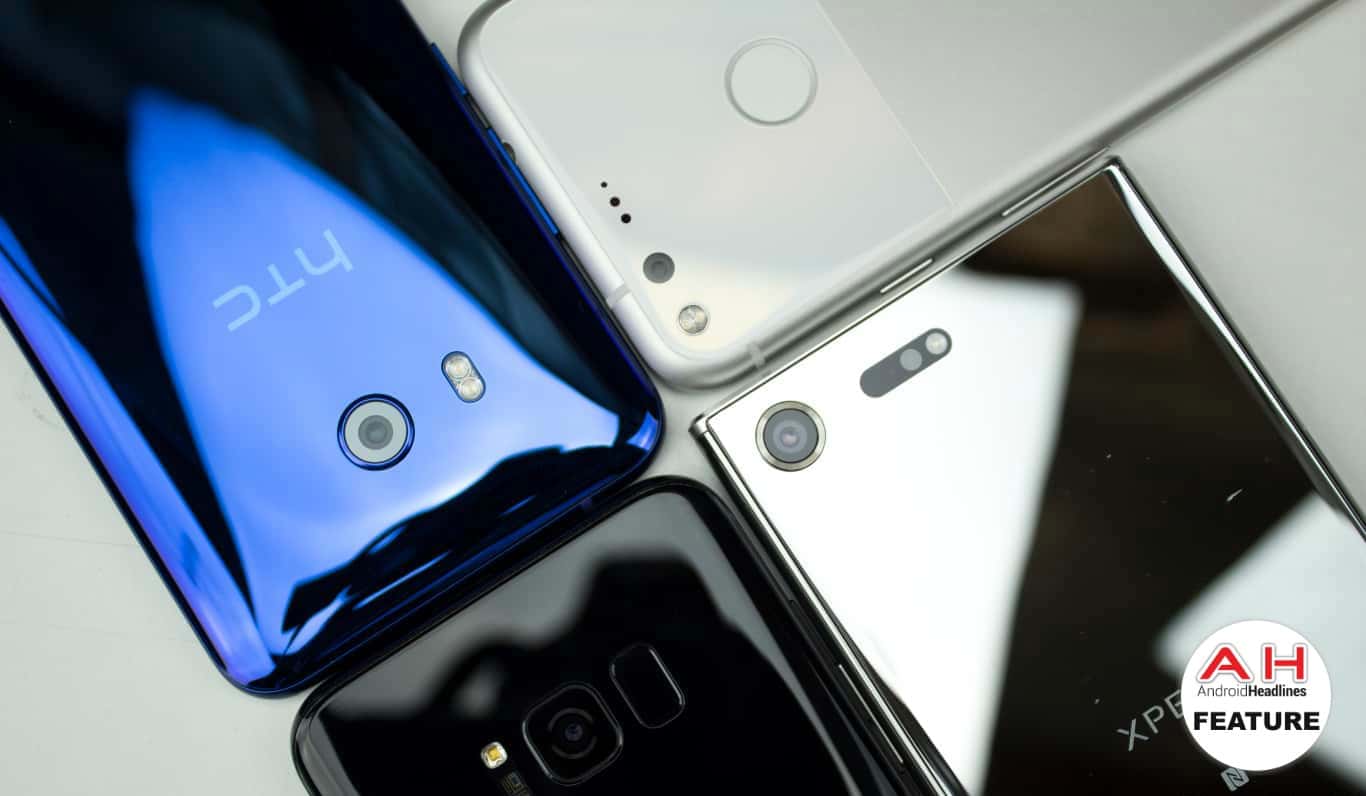 Smartphone cameras continue to improve over the years, and it's in the lowest of lighting conditions that we've seen the biggest improvement by far. In the past few months we've seen huge strides in this area, from improvements to the HDR+ algorithm that Google uses on the Pixel, to new sensors in the Sony Xperia XZ Premium and HTC U11, the smartphone industry is pushing forward with the best photos yet taken from mobile devices. Who's the king of low light photography though? We took the Google Pixel, Sony Xperia XZ Premium, Samsung Galaxy S8 and the HTC U11 out for a night time stroll in downtown for a camera comparison to decide the winner of night time low light photography. 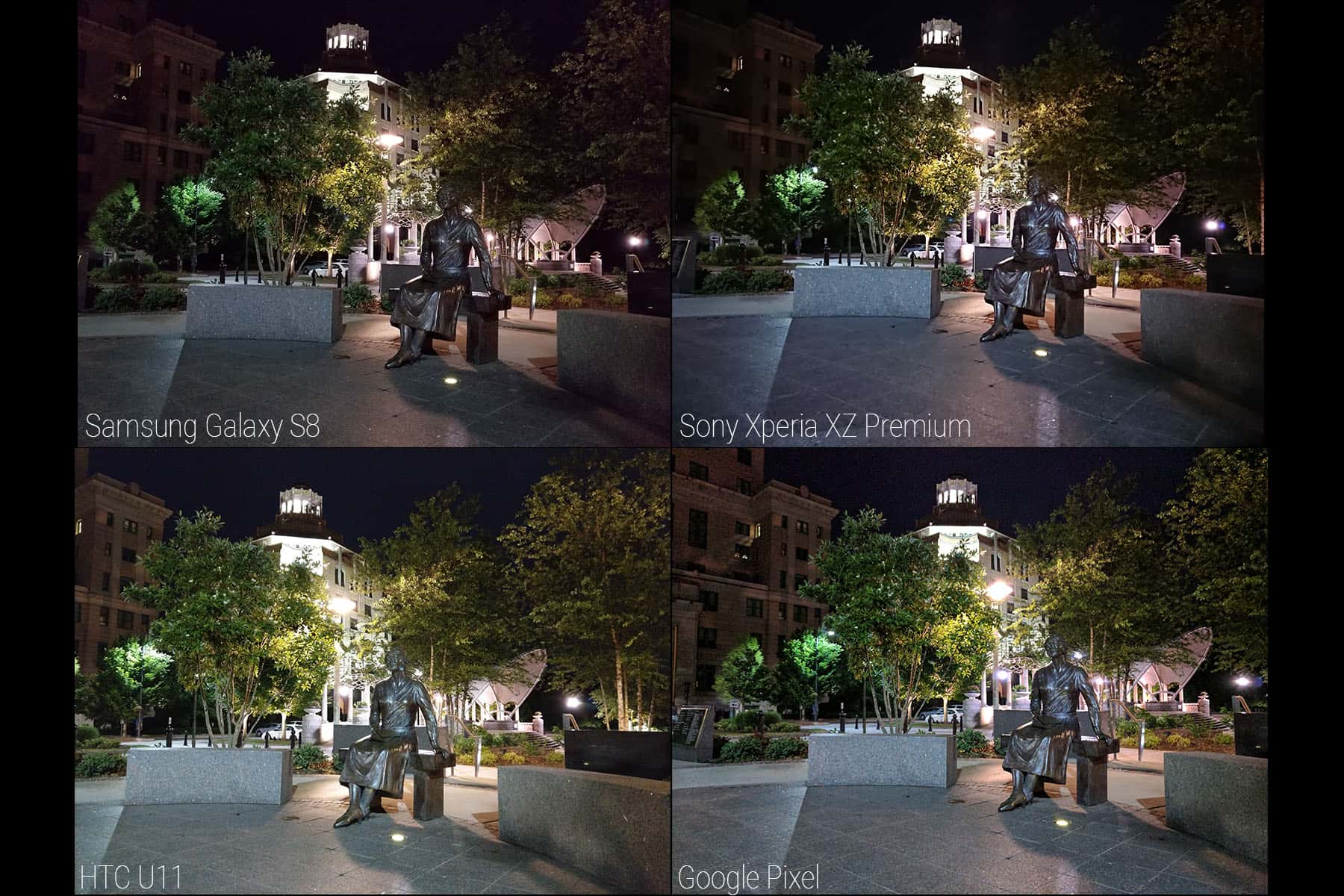 Designed primarily for daytime use, the memorial park isn't particularly well lit at night, making pictures of the statues and other artworks here particularly difficult in lower lighting conditions. All four phones feature a very different light balance here, both in exposure and color temperature. The Xperia XZ Premium features the warmest hue, with the Galaxy S8 just slightly less warm. The HTC U11, on the other hand, has a very green tint to it, while the Google Pixel features the closest to the actual scene. Exposure is also very different, with the U11 and the Pixel having the best overall exposure here, while the S8 and Xperia remain a little on the dark side.

The S8 has better balance than the Xperia though, as it has far less blown out highlights on the top of the building in the back than any of the other phones, but the rest of the scene remains a bit dark. The U11 features the best lighting of all four here, illuminating more parts of the photo than the others. Overall detail is a tie between the S8 and the U11, with some parts of the photo being more detailed on the S8, the trees and buildings in the background in particular, while the U11 features some additional detail on the statue and other foreground elements. The U11 takes a slight edge here when looking at the picture as a whole, but the smaller parts show Samsung's strengths in this situation. 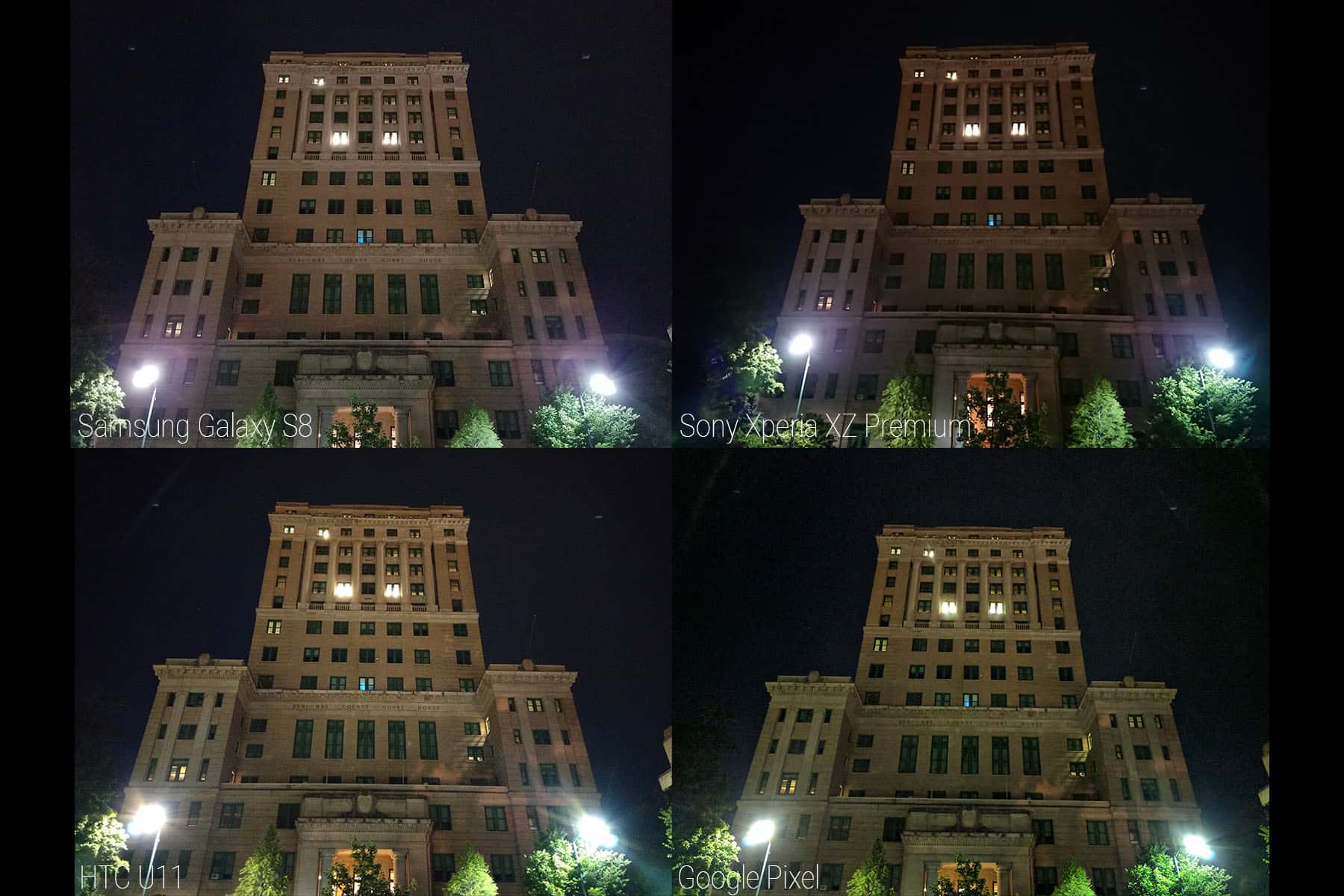 Next up is a shot of the courthouse that was in the background of the previous shot, a building that's only well illuminated at the base and not so much at the top. Color difference is quite different again, with the Pixel being on the very green side of the spectrum, and the Xperia remaining quite magenta. Exposure values paint a big difference too, with the Xperia being far underexposed as compared to the other three phones, and the U11 coming out looking great. The HTC U11's higher exposure end up blowing out the lights in the scene just a tad bit more, but it's nothing that appears to grant it any less detail around those lights.

Zooming in shows the biggest difference of all; the Xperia XZ Premium has very little detail here, with a super muddy image that shows all the detail was processed away in an effort to remove noise, and the words on the building are almost unreadable. The Google Pixel seems to have crushed the black levels a bit here and doesn't appear to be all that in focus either, causing some artifacts and other less than desirable effects around the image. Samsung's Galaxy S8 does a way better job in this shot, with much better focus and some excellent detail on the building overall, granting it second place in this very low lit image. The HTC U11 pulls out in front here though, with better exposure, better colors and better detail, giving clear visibility to the lines in the bricks and the facade of the building as a whole.  A definite win for the HTC U11 here.

3. Selfie in the Park 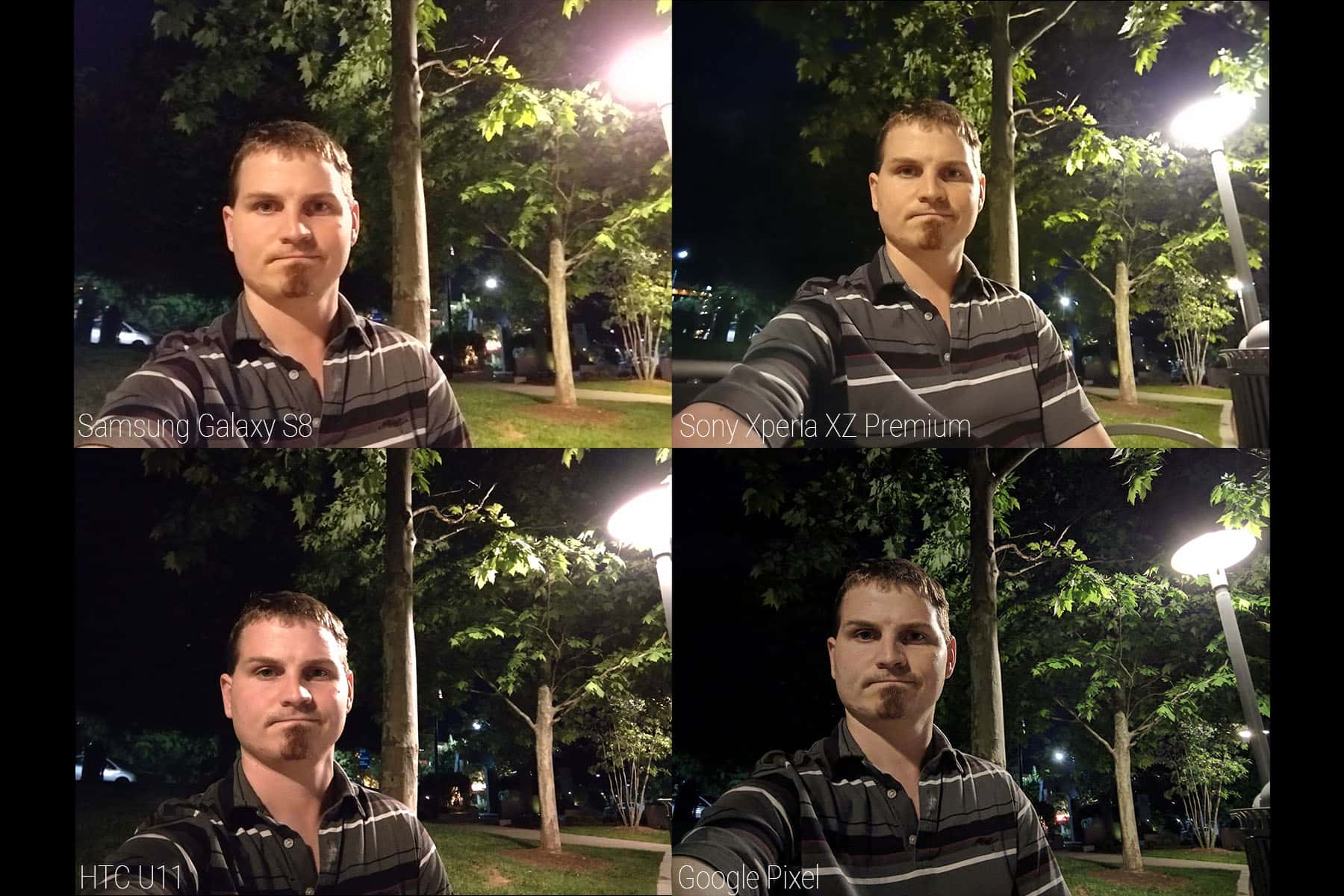 Next up we'll do a little night time selfie, with just a single light illuminating the scene here. The usual color differences here seem present, and although the Galaxy S8 gives off a warmer tone as we've come to expect, the Xperia's front-facing camera seems to trend a little green here. The U11 and Pixel come closer to reality, however the U11 makes my skin a bit more red than it actually is. The Pixel's image is a tad on the grey side, although the Pixel's colors overall look more accurate than the rest. 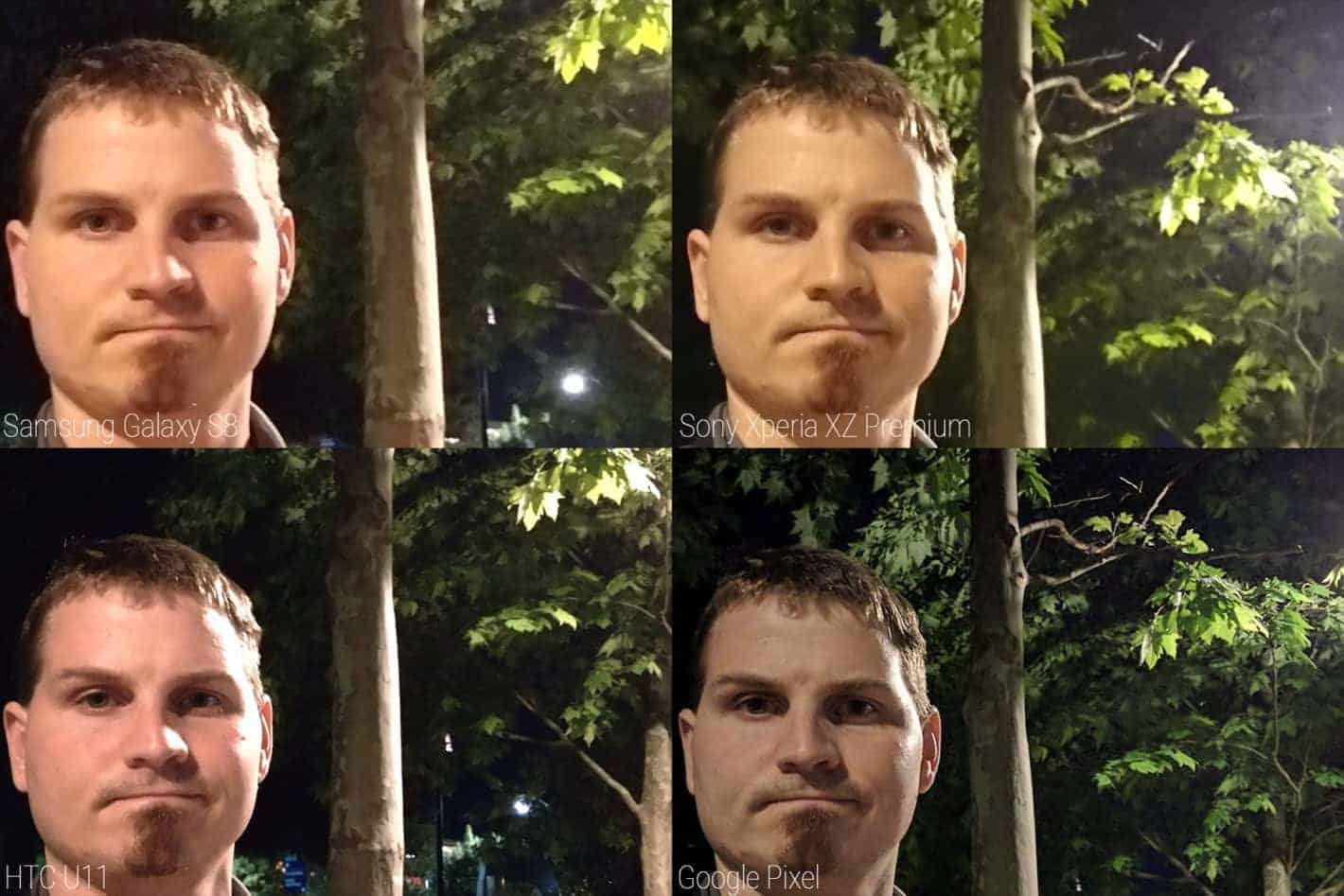 The Pixel's shot is a tad underexposed, something that's common with images from the Pixel as a whole, while the Galaxy S8 and Xperia XZ Premium are a little over exposed. The HTC U11 gets the exposure just right and comes out looking quite good on this front. The Pixel has a tad bit more detail than the rest of the phones, looking the highest resolution and the most crisp of the bunch, with the U11 following behind just a slight bit. The Galaxy S8 and Xperia XZ Premium look pretty drab and low resolution overall, with soft images that don't look good. In the end it's a tie for the Pixel and the U11, with each having some positive points but none clearly pulling ahead. 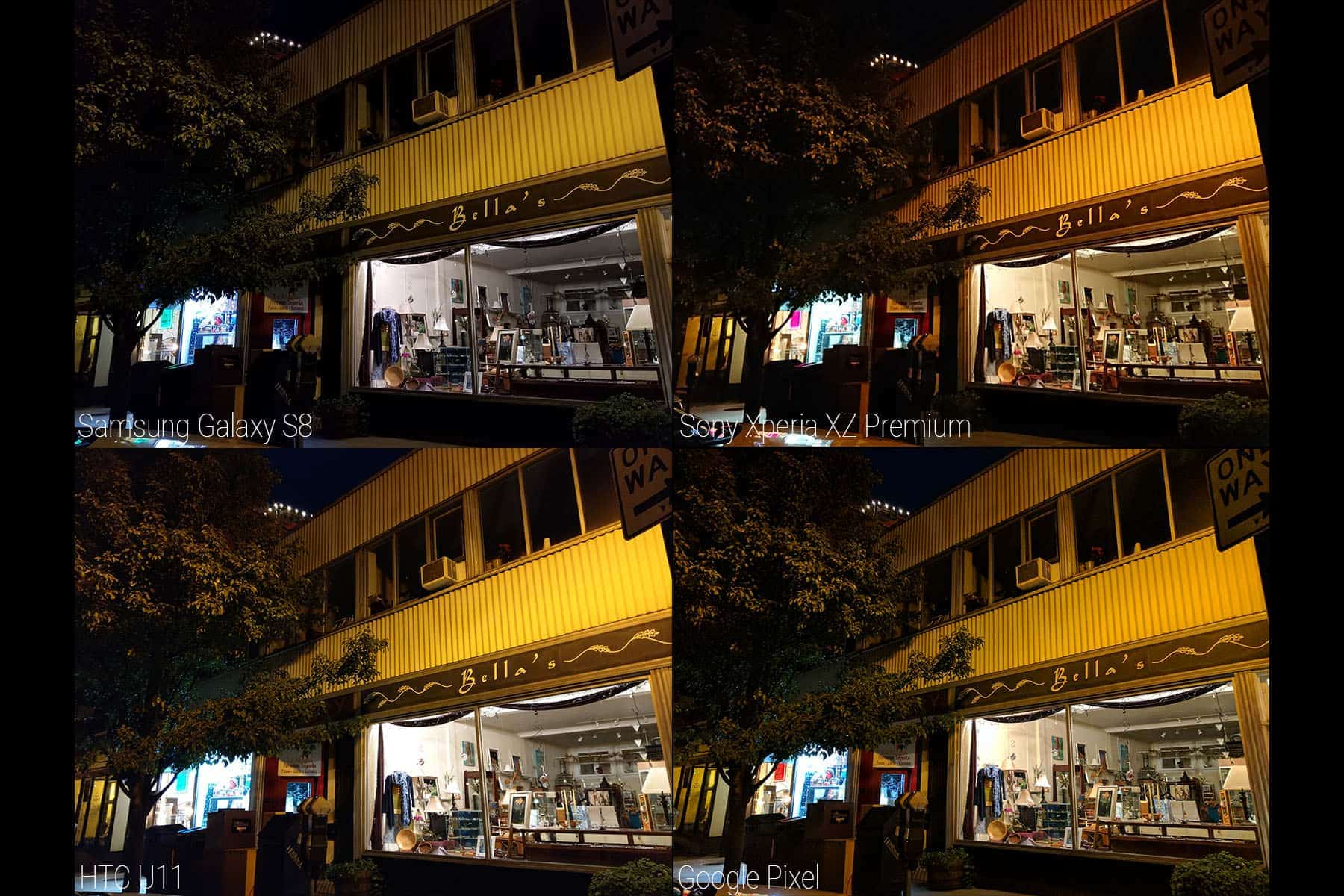 Next we'll look at a storefront basking in the shade of a tree under the midnight sun, filled with loads of little details in the window and on the facade. The Xperia's shot is a little too warm here, with a distinct red glow, while the Galaxy S8 went a bit of the opposite direction as to seemingly avoid the orange glow of the streetlight here. Subsequently the Xperia's image is the most underexposed, with some serious shadow detail loss in the darker parts of the shot, and the Galaxy S8 only fairing slightly better here.

HTC's U11 and Google's Pixel do a much better job in exposure, with the Pixel toning down some of those overblown highlights inside of the store a little better, but the U11 ends up grabbing slightly more detail in darker spots as a result of the higher exposure. Zooming into the store reveals a clear loss for the Xperia XZ Premium, as things just look muddy overall. The Galaxy S8's photo is the sharpest of the bunch, which seems to go in line with night time shots from the phone as we pointed out in the review, but it's more underexposed than the other ones and loses shadow detail throughout the scene. The Pixel and the U11 present us with the best photos, although the Pixel seems to have some spots that look a bit fuzzy or out of focus, while the combination of brighter exposure and a sharper focus give the U11 the edge once again. 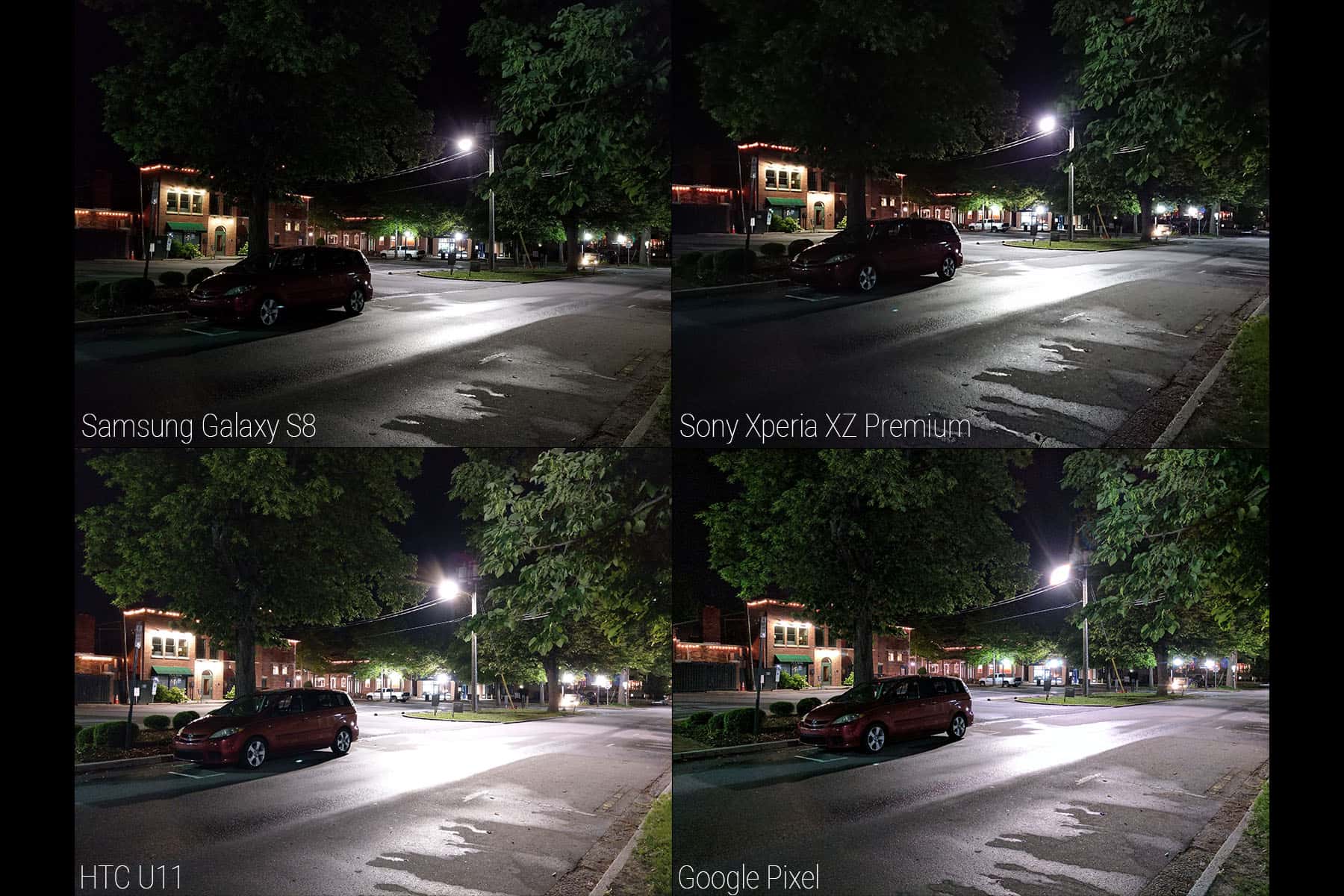 Lastly we'll take a look at a parking lot with some strong back-lighting from stores and street lights, and little to no foreground lighting on the van. The exposure differences up front are pretty stark: the Galaxy S8 and Xperia XZ Premium fare the worst, with the Xperia's image ending up the darkest of all. Both end up losing lots of details in the darker parts of the image, and in particular the van up front. The U11 and Pixel do a way better job here, but the Pixel doesn't feature as many blown out highlights on the buildings in the back where light sources are strongest.

It seems the Pixel has a bit more noise in the darker parts of the shot than the U11 does, all without the bonus of having more detail as can be the case when noise isn't removed. Zooming in reveals Sony's heavy handed image processing, muddying up the details in an effort to remove noise. Samsung's is surprisingly soft here too, looking more like a daytime processing shot than Samsung's better night time processing usually looks. In the end it's tough to call the better shot between the Google Pixel and the HTC U11, as the U11 features slightly less noise and more detail in darker areas, while the Google Pixel features more detail on background objects and has better balanced light sources. A tie for these two.

At the end of the night it's pretty clear who the overall winner is here. The HTC U11 either took the win or tied for the win in every single test, showing excellent performance at night using that new Ultrapixel 3 camera. In general, it seems to have better exposure and shadow detail, at the expense of some slightly overblown light sources, less noise and still equal or more detail than the others here. Still there's no discounting the low light performance of the Galaxy S8 or Google Pixel, both of which performed admirably and tied in a few of these tests. Day time processing is a very different beast, but it looks like we've got a new low light champion thus far in 2017. View the full gallery down below. 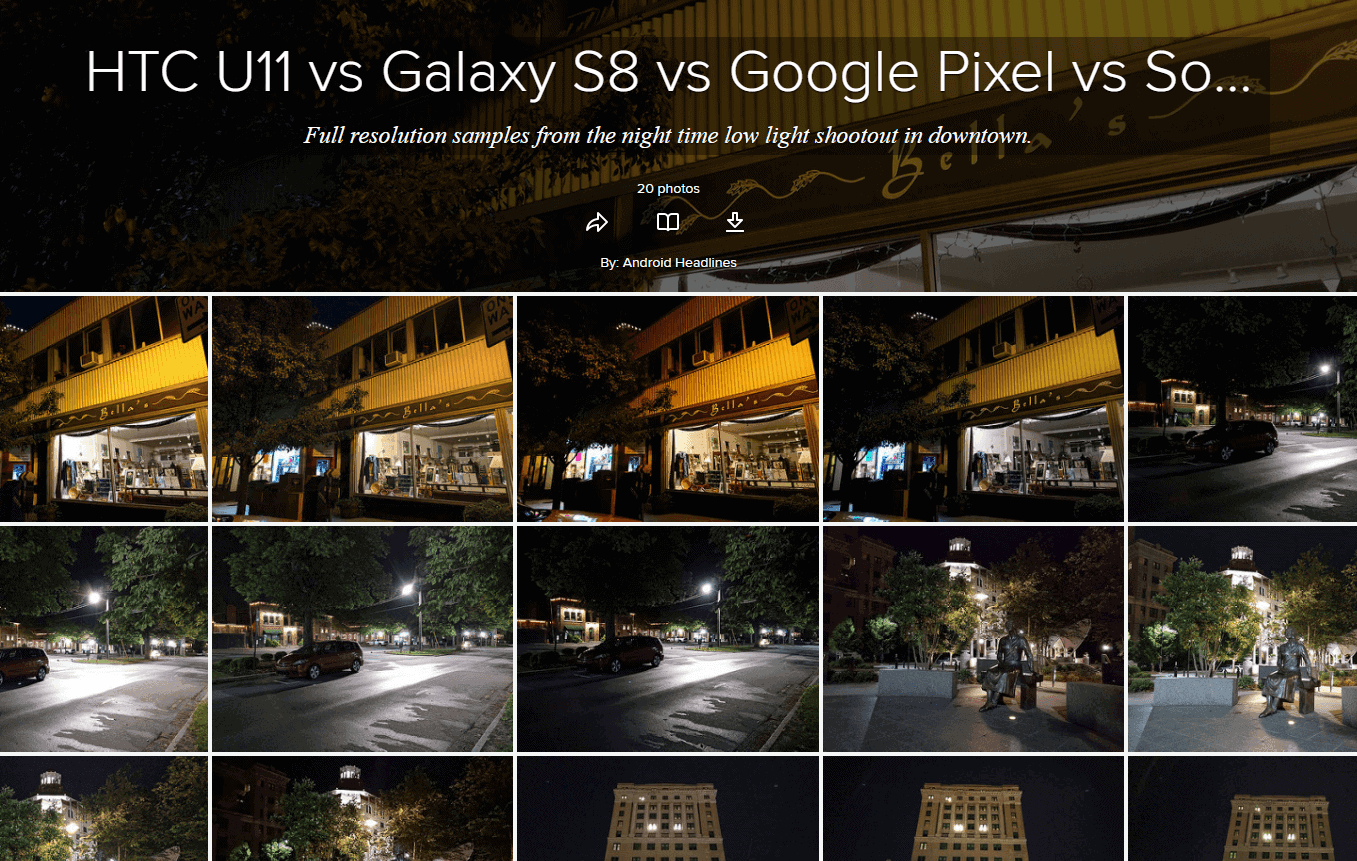