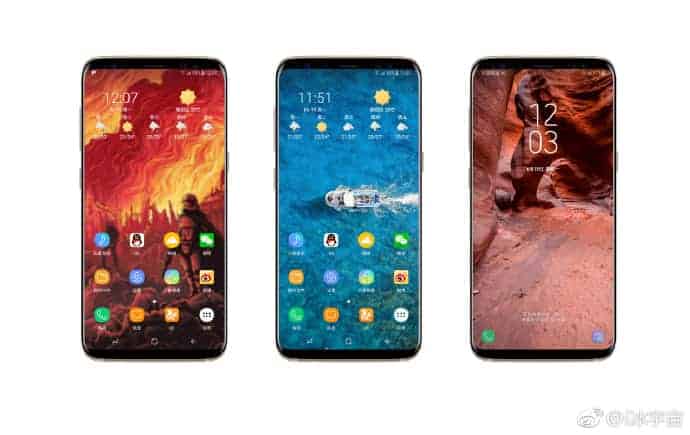 Three new supposed renders of the Galaxy Note 8 emerged online earlier today, having been posted by one industry insider from China. The images that can be seen above this writing indicate that Samsung's upcoming phablet will be relatively similar to the Galaxy S8 and Galaxy S8 Plus in terms of aesthetics, featuring a nearly bezel-less design centered around its curved Infinity Display that wraps around the phone's longer edges and boasts an unconventional aspect ratio of 18.5:9. The handset seen in the newly uncovered renders also lacks a physical Home button and presumably houses its fingerprint scanner on the back plate, while also sporting a Bixby button beneath its volume rocker on the left edge of the case.

The same source also shared a broad range of alleged hardware specifications of the Galaxy Note 8, attributing them to recent reports from South Korean media outlets that weren't specifically named. As per the latest report, the Galaxy Note 8 will have a 6.3-inch Super AMOLED display module and be powered by Qualcomm's Snapdragon 835 and Samsung's in-house Exynos 8895 system-on-chip (SoC), depending on the territory, in addition to offering 6GB of RAM and a 3,300mAh battery which won't be removable. The rumored dual camera setup of the handset is said to consist of two 12-megapixel sensors with optical image stabilization (OIS) support, the same source said, adding that the phone itself will initially be offered in black, blue, and gold, sport an "enhanced" S Pen stylus, and be compatible with the Samsung Desktop Experience (DeX) Station that debuted alongside the Galaxy S8 lineup.

Most of the newly reported information is in line with recent rumors about the Galaxy Note 8, with the exception of the piece of silicon powering the U.S. variant of the handset, as some insiders previously claimed that the phablet will debut with the unannounced Snapdragon 836 in the U.S. Samsung is also said to be developing a Galaxy Note 8 model with 8GB of RAM, though it will likely only offer it in China and its home country, sources claimed earlier this month. The fact that the device is thought to have a slightly smaller battery and somewhat larger screen than the Galaxy S8 Plus (6.2-inch panel with 3,500mAh unit) can likely be explained by its need to accommodate the new S Pen, as Samsung is hardly willing to push the boundaries of its battery tech and risk repeating last year's Galaxy Note 7 fiasco. With the phone being expected to launch in either late August or early September, more details on the thereof should be available shortly.