The Moto Z2 has just popped up on AnTuTu, and by doing that, it revealed its specs, for the most part, at the very least. The Moto Z2 will be announced on June 27, at least according to recent reports. Motorola had scheduled an event for the said date, and the Moto Z2 has been leaking like crazy recently, which suggests that we’ll get to see this handset announced during that event. In any case, let’s take a closer look at the phone’s specs, courtesy of AnTuTu.

The Moto Z2 will, according to the source, sport a QHD (2560 x 1440) display, though AnTuTu does not exactly say what size will that display be. Well, if the previous info is anything to go by, we’re looking at a 5.5-inch panel here, which means that this handset will sport the display of the same size as the one on the original Moto Z. Qualcomm’s Snapdragon 835 64-bit octa-core processor will fuel the Moto Z2, and the Adreno 540 GPU will be included for graphics processing. A 12-megapixel snapper will be included on the back of the Moto Z2, and a 5-megapixel camera will be available on the phone’s front side. Android 7.1.1 Nougat will come pre-installed on the Moto Z2, and on top of it, you’ll get some additions by Motorola, but this will be a stock build of Android, for the most part. It’s also worth noting that AnTuTu revealed that the Moto Z2 will ship with 64GB of native storage, while the battery info was not mentioned, unfortunately.

Now, it’s worth saying that there’s a slight possibility that Motorola may announce the infamous Moto X handset during this event as well. The Moto X surfaced in a video last month, along with some details, so it’s possible that it will arrive as well. In any case, the Moto Z2 is expected to be made out of metal and glass, while you will get the usual set of POGO pins on the back, which you’ll be able to use in order to attach Moto Mods to this smartphone. We still do not know how much will the Moto Z2 cost, but this will be Motorola’s all-new flagship, so don’t expect it to be cheap or anything of the sort. 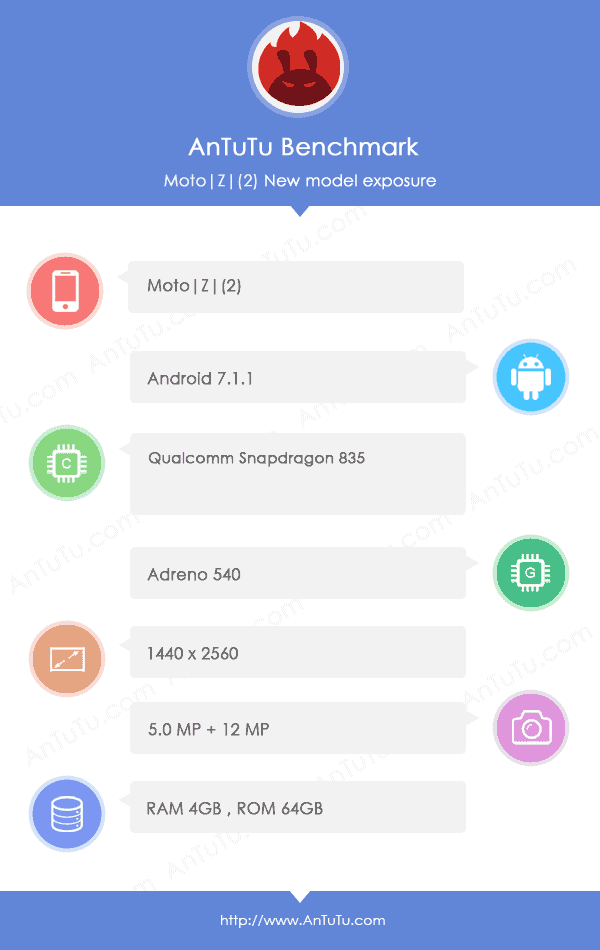