A recently leaked image is claimed to be of Samsung's Galaxy Note 8 in Blue Coral, showing a back view of the device in a light blue color that looks pretty much the same as the Blue Coral color of the Galaxy Note 7 that launched last year. The image showcases a similar shape to the Galaxy S8 and Galaxy S8 Plus with slightly rounded off corners, though it has no fingerprint sensor showing on the back and the camera appears to be a dual-lens rear-facing camera design with a vertical set of sensors, along with the LED flash below that.

With no fingerprint sensor on the back that would have to mean Samsung moved the sensor back to the front like on previous devices, if this design is to be believed and this is actually a final design for the phone. Aside from the lack of a fingerprint sensor on the back the design in this image looks to stay true to Samsung's design choices for its current flagship Galaxy S8 line, which makes it all the more interesting when looking at the image below, which certainly has some of the same features as the image above in regards to the design, but also takes on its own look in some other ways.

The image below for example has more square-shaped corners and it's hard to tell if the outer edge of the camera module is all black or if that's just the way it looks in the render, but in the image above it looks like it has either a silver color or a color that matches the rest of the device. That said the similarities include the vertical rear-facing camera sensors with the same placement of the LED flash module and the Samsung logo which do match with a leaked image of the Galaxy Note 8 design from earlier this morning, and of course the color appears to be Blue Coral. The Blue Coral color option has been popular since last year when Samsung released it as a color of the Galaxy Note 7, then released it again as a new color for the Galaxy S7 Edge, and in the near future as a new color for the Galaxy S8 and Galaxy S8 Plus, which appeared in a leaked press render yesterday. 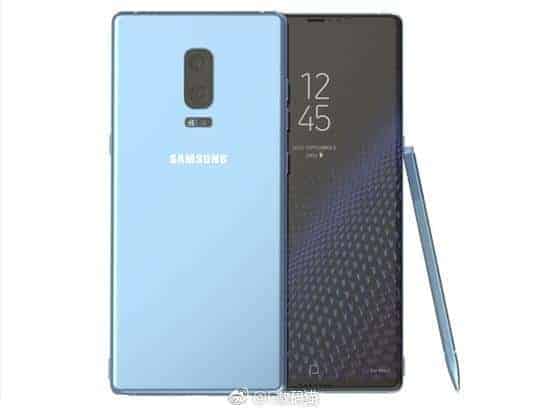