An Infinix-made smartphone bearing the model number X603 appeared in the database of mobile benchmarking tool GFXBench earlier today, boasting mostly flagship specs that put it in the high-end segment of the handset market. The listing reveals that the device boasts a 6-inch display panel with a Full HD resolution of 1920 by 1080 pixels, indicating that its screen features a conventional 16:9 aspect ratio. The Infinix X603 was also benchmarked as being powered by the MediaTek Helio P25 (MT6757CD) system-on-chip (SoC), the same piece of silicon powering the Gionee A1 Plus. MediaTek’s chipset is equipped with the RM Mali-T880 dual GPU clocked at a maximum frequency of up to 1GHz, while its eight cores operate at a maximum of 2.3GHz and the device itself was running Android 7.0 Nougat at the time of its testing, likely enhanced with some proprietary mobile software suite.

The Infinix X603 was also listed as having 6GB of RAM and 64GB of internal flash memory that’s presumably expandable via a microSD card slot. According to the same listing, the device sports a single-lens primary camera setup comprised of a 12-megapixel sensor with autofocus and face detection support which is accompanied by a regular LED flash unit. The top bezel of the handset supposedly houses a 5-megapixel camera module that can record 2K video and photos but isn’t supported by a flash and boasts no special functionalities. The model number of the device suggests that the newly tested handset may be the Infinix Note 4, given how last year’s Infinix Note 3 bore the model number X601. That particular handset boasted an identical display panel and a metal frame, in addition to being powered by a 4,500mAh battery that was meant to compensate for its massive screen. The Infinix Note 3 also ran a heavily reskinned version of Android 6.0 Marshmallow out of the box, suggesting that its successor will possibly offer a similar software experience.

There’s still no word on when the possible Infinix Note 4 might hit the market, though its availability is expected to be somewhat limited. Regardless, more details on the device may follow in the coming months, presumably no later than fall. 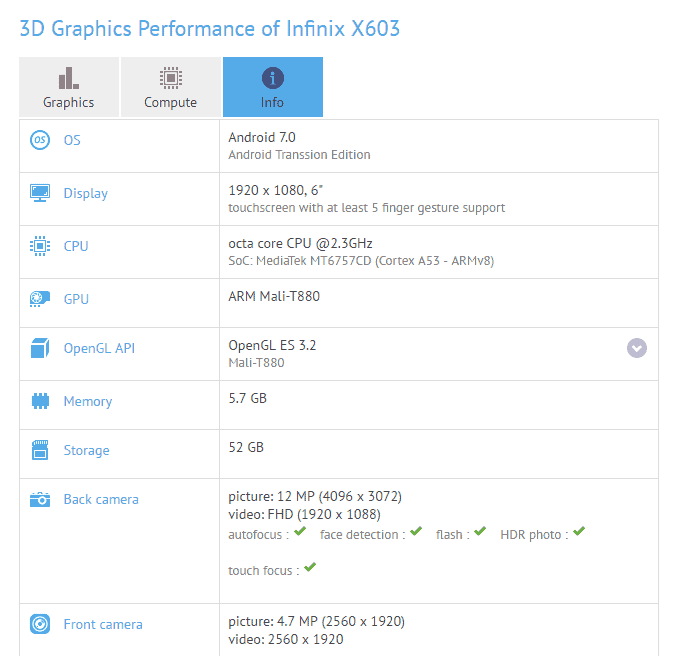