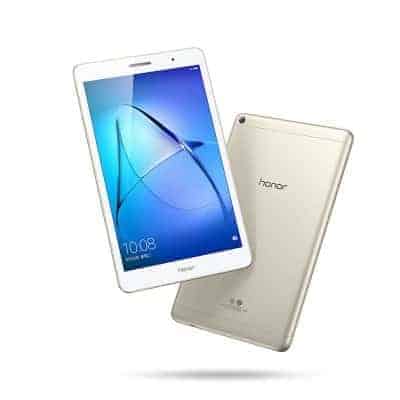 The 8-inch Huawei MediaPad T3 is now being prepared for an international release set to take place in July, and this 8-inch tablet is currently available for pre-order from online retailer GearBest, where the slate is presented in two different configurations based on RAM and storage options, well, the 2GB RAM variant is currently available for pre-order, the 3GB RAM model will become available soon. Do keep in mind that the tablet is listed under the 'Huawei Honor T3' name, while in fact this is the Huawei MediaPad T3 tablet, so don't get confused by the different name. The Huawei MediaPad T3 8.0 with 2GB of RAM and 16GB of storage is expected to ship on July 7, 2017, while the variant sporting 3GB of RAM and 32GB of on-board memory will become available for pre-order soon, and it will probably ship a bit later than the 2GB RAM model.

The 2GB RAM Huawei MediaPad T3 8.0 variant is available only in the gold color variant, and it seems like the same will happen with the 3GB RAM model judging by GearBest's 'Arrival Notice' listing. Either way, they both carry the same hardware internals except for the difference in RAM and storage configurations, and similarities include a TF card slot supporting up to 128GB of external memory, 4G LTE capabilities, Bluetooth 4.1 and Wi-Fi 802.11 a/b/g/n/ac connectivity. Under the proverbial hood operates a Qualcomm Snapdragon 425 system-on-chip housing four ARM Cortex-A53 CPU cores clocked at up to 1.4 GHz, and an Adreno 308 graphics chip. Both variants carry 8-inch IPS LCD displays with a resolution of 1280 x 800 and a pixel density of around 189 pixels per inch, and both are equipped with a 5-megapixel main camera on the back panel as well as a 2-megapixel front facing sensor. The tablet runs Android 7.0 Nougat out of the box coupled with Huawei's proprietary EMUI 5.1 software and is powered by a 4,800mAh non-removable battery wrapped in a polycarbonate case weighing 350 grams (0.77 pounds).

As far as pre-order pricing is concerned, GearBest offers the Huawei MediaPad T3 8.0 with 2GB or RAM and 16GB of on-board memory for $200 at the moment. Keep in mind that these two tablet variant may end up costing a bit more once the pre-order period expires, who knows. If you're interested, feel free to click on either of the two banners below for more details.