The Chinese smartphone vendor Huawei has filed a trademark application for “Huawei 4D Touch”. The application was submitted to the Intellectual Property Corporation of Malaysia (MyIPO) on June 9th and is currently under the mandatory reviewing process before any trademark is granted. While the listing on the MyIPO website does not reveal any specific details, the name of the trademark suggests that it is related to some kind of technology meant for interactions with the display to perform different tasks.

If you might remember, Huawei was the first OEM to bring pressure sensitive touch technology to smartphones with the release of the Huawei Mate S in 2015. Although it was available only on the most expensive Mate S model, it allowed users to accomplish various tasks by varying the amount of pressure while touching the display. The idea was inspired by Apple’s Force Touch on the Apple Watch and MacBook’s trackpad which later became a regular part of iPhones under the name 3D Touch. Now as the trademark is for 4D Touch, it seems like Huawei has something bigger and better to offer to smartphones. It is surely difficult to imagine what exactly Huawei will be bringing with 4D Touch but the listing shows that the trademark will be applicable to all sorts of gadgets with displays like smartphones, tablets, smartwatches, computers, cameras, smart bands, and smart eyeglasses among others. But only the time will tell how many of these devices will actually be getting benefits of the technology.

In recent times, we have seen OEMs coming up with different ways for users to interact with their devices. HTC released its latest flagship HTC U11 with ‘HTC Edge Sense’ feature which makes it possible to do tasks like launching the camera by simply applying pressure on the side frames (like squeezing) of the phone. And even though with the Mate S’ pressure sensitive display, Huawei was the first one to bring it to smartphones, it never really made it mainstream which will be something to look forward to if it is granted the 4D Touch trademark. It is speculated that Huawei might announce 4D Touch alongside upcoming Mate 10 but we will have to wait for the time being to get answers to all these questions. 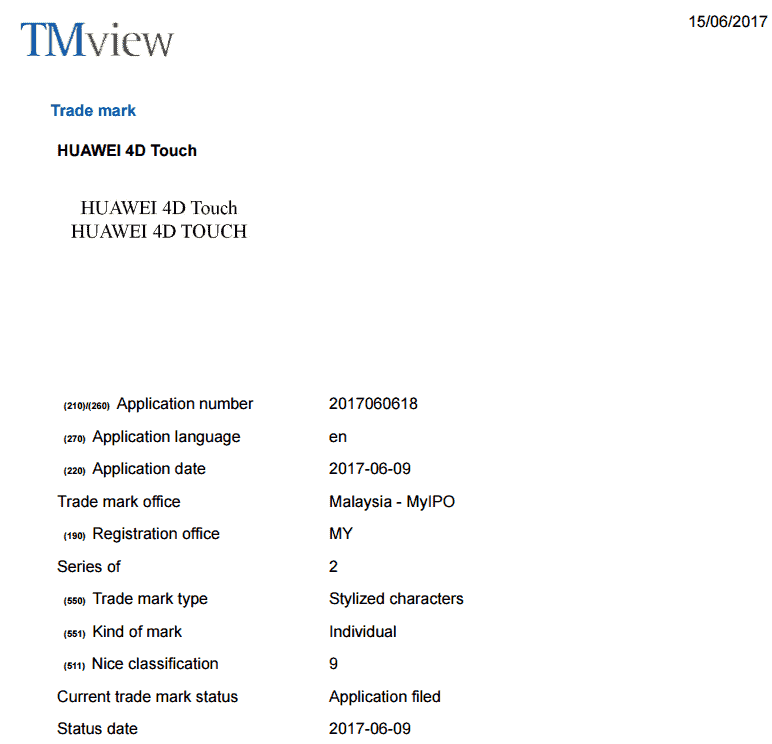