HTC is gearing up for the launch of the HTC U11 in India, as the electronics company recently started sending invites for the handset’s unveiling event scheduled to take place on Friday, June 16, at 11:30 AM local time. Pricing details for the Indian market have not yet been revealed, however, the smartphone launched in the United States, Canada, and the UK for the equivalent price of roughly $650 to $700, meaning that the HTC U11 in India should cost between 42,000 and 45,000 rupees.

The HTC U11 was officially announced in May and released in China later the same month. It also launched in the US market last week where the flagship phone seems to have attracted enough buyers to reach an "out of stock" status in just a couple of days of market availability. The handset is now officially heading towards India where it will be introduced later this week; however, whether or not the smartphone will become available for purchase on the same date remains to be seen. It’s also possible that the company might offer the HTC U11 on pre-order terms for a while before actually releasing it in the following days or weeks.

As for what the HTC U11 has to offer, this is the company’s first flagship to promote the new "Squeeze for the Brilliant U" tagline, which is supposed to reflect the pressure-sensitive technology employed by its chassis. The technology adds an extra layer of gesture control, allowing users to squeeze the edges of their smartphone in order to issue certain commands. Another characteristic specific to the HTC U11 is the inclusion of USonic active noise-cancelling earbuds that are bundled with the phone. As for its hardware internals, assuming that the HTC U11 in India will share the same characteristics with the variant launched in the US and other regions, the smartphone should make use of the Qualcomm Snapdragon 835 system-on-chip (SoC) manufactured using Samsung’s 10nm FinFET LPE process nodes, housing eight Kryo 280 CPU cores and the Adreno 540 graphics chip. However, unlike the HTC U11 launched in the United States, the flagship in India is expected to be released in two main variants, housing 64GB of storage and 4GB of RAM or 128GB of storage and 6GB of RAM. More details about pricing and availability of the different variants of the HTC U11 should follow shortly. 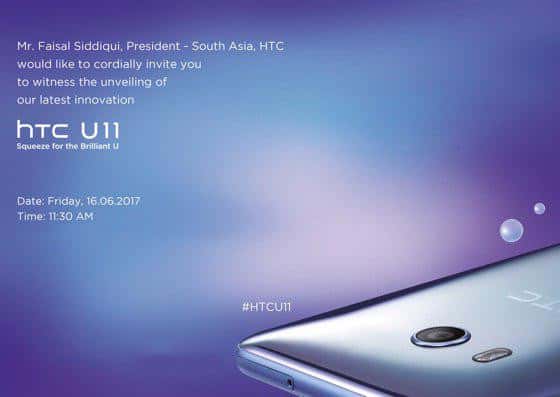