The Wi-Fi Alliance recently certified an unannounced smartphone from Motorola Mobility LLC, bearing model number “XT1902-2” and carrying a MediaTek Helio P20 MT6757CH system-on-chip. Interestingly enough, a similar device bearing model number “XT1902-3” was also benchmarked by Geekbench late last week, however, unlike the XT1902-3 which was identified as a Lenovo device by the benchmarking tool, the XT190-2 at hand seems to bear the Moto moniker instead.

Motorola Mobility LLC has been a subsidiary of Lenovo since 2014, and given the fact that both model numbers are nearly identical and that both make use of the same MediaTek Helio P20 system-on-chip, it’s very likely that the XT1902-2 and XT1902-3 are two variants of the same device. Exactly how these two variants will differ remains to be seen, and perhaps more importantly, only time will tell if the mysterious smartphone at hand will be released as a Lenovo or Moto smartphone. It’s also worth reminding that although the Motorola brand has been gradually phased out after the acquisition by Lenovo, Motorola Mobility’s CMO announced earlier in March 2017 that the company will abandon the “Moto by Lenovo” branding and instead it will be fully (re)focused on Motorola and its vast legacy moving forward. Having said that, it’s more likely that the XT1902-2 and XT1902-3 will carry the Motorola brand at launch.

As for what makes the XT1902-2 tick, the Wi-Fi Alliance reveals only the model number and the OS (operating system) version – namely Android 7.1.1 Nougat – as well as the inclusion of a MediaTek MT6746CH Helio P20 system-on-chip under the hood. In addition, the handset could also make use of 4 GB of RAM, assuming that the XT1902-2 will share the same hardware characteristics with the XT1902-3 beyond the chipset. As yet there’s no official word in regards to the XT1902-2 or XT1902-3, however, there are speculations that the handset(s) could be a direct sequel to the Moto M released in November 2016. The aforementioned device is also powered by a MediaTek system-on-chip, specifically the Helio P15 in India and the Helio P10 in other regions. That being said, the MediaTek Helio P20 would be a logical choice for a chipset powering the sequel. 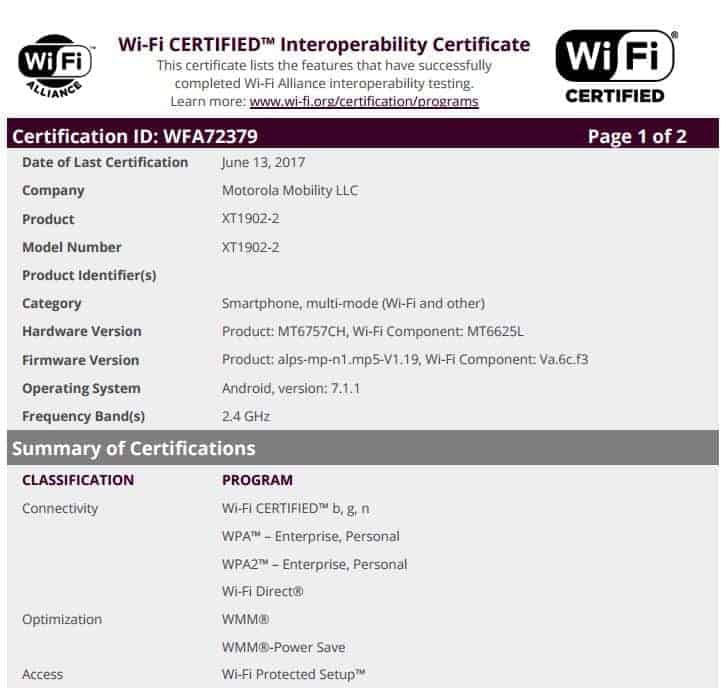