There are now 5 billion mobile subscribers worldwide, according to data released this week by GSMA Intelligence. With the GSMA’s research division noting that this now equates to “more than two-thirds of the global population” being connected to a mobile service. According to the press release, while it is a “tremendous achievement” it has taken four years for the number of subscribers to go up from 4 billion to 5 billion. It also seems likely that it will take around the same amount of time for the next billion to be reached, as GSMA Intelligence expects that by the end of this decade, the number of mobile subscribers will have climbed to 5.7 billion.

While this is a global number, the breakdown of the data reveals some interesting regional differences. For instance, GSMA Intelligence notes that the Asia Pacific region now accounts for 55-percent of the 5 billion mobile subscribers. Further explaining that China and India dominate the proceedings. With India now said to be accounting for 730 million subscribers, and China alone accounting for well over one billion subscribers. However, while the Asia Pacific region is accredited with the highest volume of mobile subscribers, it does not account for the most densely penetrated region. Instead, that title seems to belong to Europe, as GSMA Intelligence details that as much as 86-percent of Europeans are mobile subscribers. Of course, that is subject to change over the coming years as the announcement also does explain how some markets are reaching their saturation points and other – “mainly rural, low-income populations” – will see significant growth going forward, and will likely account for the majority of the next mobile subscriber milestone.

What is hugely impressive here is that the 5 billion number relates to unique subscribers. As the general number of subscriptions is always going to be much higher, with some subscribers having more than one subscription. On that point, a similar report (Ericsson Mobility Report) was also released this week and that report saw the number of subscribers as slightly higher, 5.2 billion. With the same report also suggested that the current number of actual subscriptions was much closer to 7.6 billion. A subscriber-to-subscription difference that both Ericsson and GSMA Intelligence expect to become even wider in the future, largely thanks to the onset of 5G. 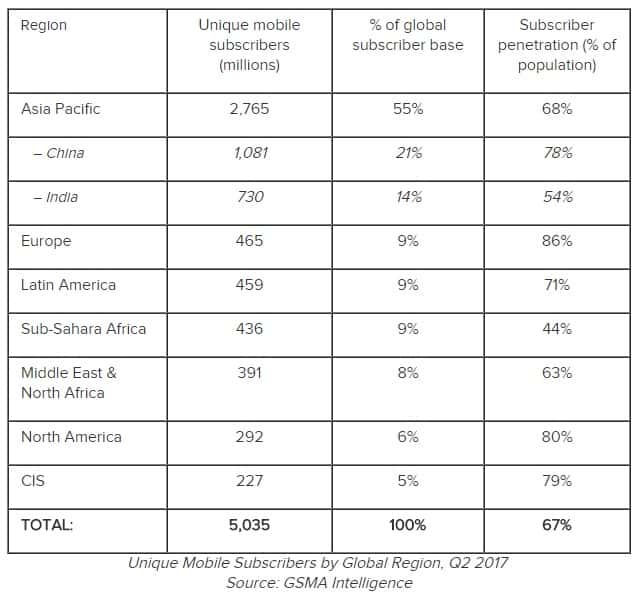