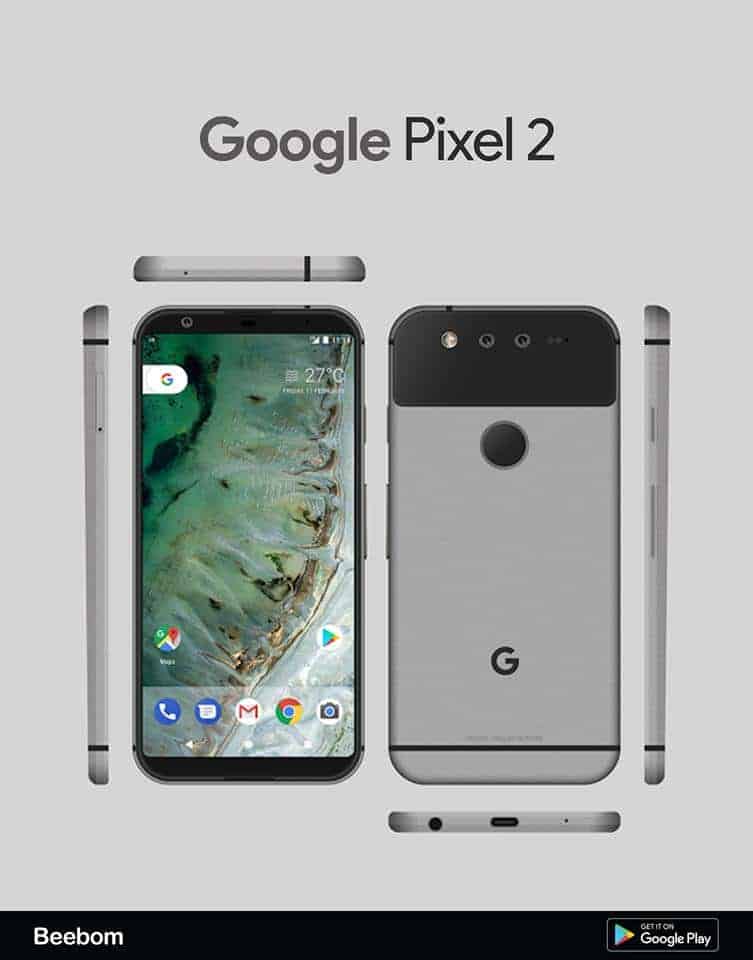 A Google Pixel 2 render has shown up with a dual rear camera, showcasing what a possible design for the phone could be. To be clear it's quite likely that this is nothing more than a fake render that someone created to show off a design of what they want the Pixel 2 to look like, but it is interesting that renders for the device are starting to surface online to showcase the design of a phone that Google is expected to unveil in the first week of October, the same time that it revealed the Pixel and Pixel XL last year. That being said, Google's potential Pixel 2 reveal is only a little over three and a half months away, so more images could pop up in the weeks and months ahead.

What's interesting about this render is that the design looks mostly the same as the current Pixel save for a few details, some more minor than others. The most obvious of the design elements that are shown to be different from the Pixel is the nearly bezel-free display. With little to no bezel on the sides this isn't too different from the original model, but the display shows much less bezel on the top and bottom which would be an obvious departure from the current design, though it would likely be appreciated by consumers as bezel-free screens provide more screen real estate and allow for more surface area to interact with the phone. Whether or not Google will use a similar design trait is unknown right now but the render does a good job of showing what it might look like if Google did decide to produce something similar.

The dual rear cameras are another obvious change as the Pixel and Pixel XL only have a single rear-facing camera, but dual rear cameras seem to be a growing trend among flagship devices. Since this is not likely to be a real press render of the phone, there's no way of knowing whether or not Google will use dual rear cameras just as there is no way to know if the screen will be almost edge to edge for the top and bottom. Another difference envisioned in this render is the movement of the 3.5mm audio port from the top of the device to the bottom next to the USB Type-C charging port. There's no indication yet that Google has even decided to keep the 3.5mm audio port on the Pixel 2, let alone moving its location, but having it on the bottom might prove to be a more convenient spot for some users. This isn't the first time a render for the next Pixel smartphone has shown up as another recently surfaced back on June 7th, showing a similar looking design for the display, though different placement of the camera sensors on the back of the phone and with a different color for the entire device. Since Google isn't expected to reveal the Pixel 2 until the Fall, there's plenty of time for more renders to pop up.