Google has filed an application to trademark the word #teampixel with the United States Patent and Trademark Office (USPTO). The listing for the trademark filing on the USPTO website does not divulge too many details except that the application was filed on June 9th and the trademark will cover “mobile phones; smartphones” and “advertising and marketing services provided by means of marketing communications, namely, social media, internet marketing, and sharable or viral communications channels.” But we can surely dig up these two aspects to come up with some theories about what Google might be planning.

The application mentions that the #teampixel trademark is for mobile phones and smartphones which clearly refers to the Pixel series of smartphones and is unlikely to cover the Pixel C. Google debuted the smartphone series last year with Pixel and Pixel XL and is now rumored to be working on successors reportedly codenamed “Walleye” and “Taimen.” Now you might be wondering what exactly the trademark has to do with Pixel series phones and this is exactly where it gets difficult to speculate but there are some possibilities. The first and most sensible one is that #teampixel seems to be related to customer support meant for Pixel users. Google released both Pixel phones with 24/7 dedicated live customer support which is accessible directly from the phone. It allows users to connect with support staff either via chat or call and also the ability to share phone’s screen. Now, it is quite possible that Google might be thinking of taking it to the next level and beyond just the smartphone. As the second aspect of the trademark filing talks about marketing communication and social media, #teampixel might be related to offering real-time live support via social media platforms like Twitter where users can connect quickly and even when they don’t have access to their Pixel device.

As for the second possibility, it might have something to do with the promotion where Google encouraged Pixel users to click photos and share them on social media using #teampixel. The Pixel was the highest-rated DxOMark smartphone camera until the HTC U11 took over by a single point, and as Pixel successors are also said to focus on cameras, there might be an even bigger promotion from Google to get users to showcase the Pixel’s photography capabilities. It’s entirely unclear what Google’s plans are yet for the trademark, but filing a trademark does not mean that Google will actually be granted the patent for the term. 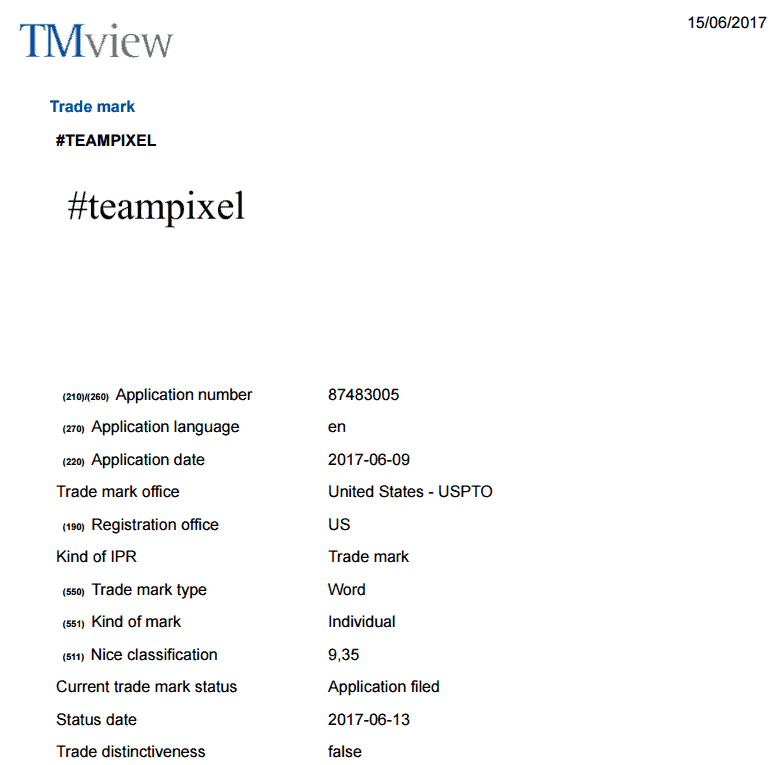