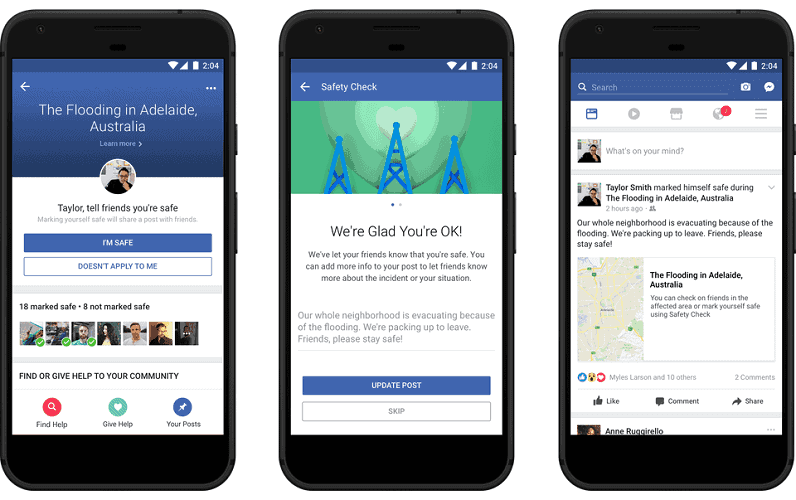 Facebook has updated its Safety Check feature to include new features that will help not only in ensuring the safety of its users but also their recovery from a crisis. The new features added to Safety Check include the ability to start fundraisers, expanding the scope of the Community Help feature, allowing users to describe their current situation, and informing its users better about the scope and nature of a certain crisis.

The ability to start fundraisers, which is one of the new features added to Safety Check, gives Facebook users more ways to organize and give help to people in need. Through this feature, users can donate to both charitable and personal causes related to a certain crisis. The funds, when used appropriately, can then be used to rebuild homes, provide relief aid, or support rescue operations. While incredibly useful, this feature is only initially available in the United States. Meanwhile, Facebook also expanded the Community Help feature of Safety Check. The Community Help feature connects the communities affected by a disaster or crisis in order to coordinate relief efforts much faster and easier. The feature was initially available on mobile platforms but now, Facebook is expanding the feature to allow desktop users to access the service. Allowing users to use the feature on desktops may help in relieving the mobile operators of additional data traffic through routing the data via wired services like DSL, fiber or cable. The wireless networks can then be utilized by rescuers or government agencies on the ground for communication during relief or rescue operations.

Facebook also added two more features to Safety Check that focuses on information dissemination and communication. The social media giant now allows users in disaster-stricken areas to provide additional information on what is taking place in their area in the form of personal notes. The information provided by users will then be included in a News Feed story, which also states that the person has been marked safe. Last but not the least, the social network has partnered with NC4, a safety and security solutions provider, in order to produce a short summary of the latest information available regarding the crisis. This could help both the people in the affected and areas and their loved ones in assessing the actions that will be made during the crisis.