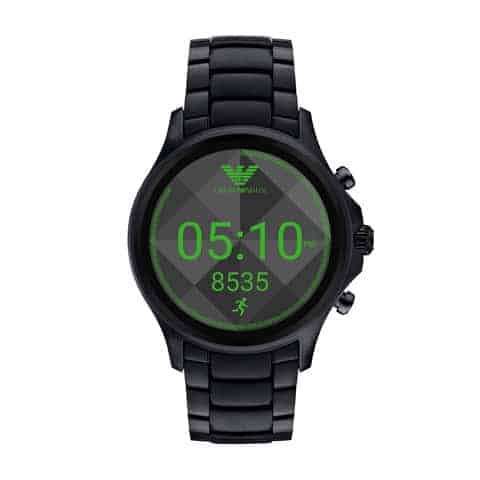 The Emporio Armani Connected Android Wear smartwatch, which was announced earlier this year, will be seeing a formal release around September 14th. This news emerged from the Milan Fashion Week where the device was shown off once again. The company's hybrid smartwatches will also be available on the same date. The hybrid smartwatches will be able to connect with apps on Google Play for fitness tracking as well as having its own app for doing such. Meanwhile the Android Wear model will obviously have support for the Google Play Store since it does run on Android Wear 2.0.

Emporio Armani Connected is a Fossil-made smartwatch, so you can expect more-or-less the same support and hardware as what has been done on other Fossil smartwatches. There's no price yet for this smartwatch, but it'll likely be higher than most other smartwatches. It is running the Snapdragon Wear 2100 processor and has an AMOLED display. There's no word on the resolution but Fossil has told numerous news outlets that it is "high resolution" so users will have to wait until it's available to see what that actually means. Some of the micro apps being included in the Emporio Armani Connected include the ability to adjust the watchface, including changing the color and such, right there on the watch, instead of needing to do it from the Android Wear app on your smartphone. This is actually true for most of the Fossil smartwatches coming out, including those from Diesel and Michael Kors.

Fossil has released over 100 smartwatches this year (or at least announced over 100, many are not in customers hands just yet), among the many different brands that they create watches for. These are not all Android Wear smartwatches, as some, if not many of them are hybrid watches. This means that it does not have a color display, or a touch screen, it's a traditional looking watch with the ability to track fitness and such behind-the-scenes. There's also no word just yet on where you'll be able to purchase the Emporio Armani Connected Android Wear Smartwatch just yet, but it'll likely be announced in the very near future.