ASUS’ new smartphone, named the ZenFone 4 Selfie, has shown up on the GFXBench website. The device is listed as Z01M, which suggests that this is, in fact, the ZenFone 4 Selfie. The GFXBench listing usually talks a lot about the smartphone’s hardware, and this one is no exception. The smartphone is listed to be running on Android 7.1.1 Nougat. It is expected that the company will add its own software on top of the stock Android, and it’s almost certain we’re looking at ZenUI here. As far as hardware specifications of this smartphone are concerned, it has been reported that it will carry a 5.5-inch FullHD display on the front, with a resolution of 1920 x 1080.

In terms of the internal hardware, the ASUS ZenFone 4 Selfie appears to be powered by a Qualcomm Snapdragon 625 SoC, which is an octa-core processor. It also packs the Adreno 506 GPU to handle the graphics side of things. The GFXBench listing suggests that it has 4GB of RAM and 32GB of internal storage. However, it remains to be seen if it will have support for storage expansion for adding more storage via a microSD card. Now, coming to the camera of the ASUS ZenFone 4 Selfie, it looks like the smartphone will carry a 16-megapixel rear-facing camera. On the front for the selfies, it packs a 12-megapixel sensor. Both cameras have the ability to record videos in 4K resolution, which is a nice touch. And given the fact that the smartphone is named “ZenFone 4 Selfie”, it is evident that the company has put more focus on the selfie camera.

As of now, that is all the information that could be extracted from the GFXBench listing. However, speaking of selfies, it does look like the Taiwanese OEM is trying to focus more on the front-facing camera a.k.a selfie camera capability of the smartphones. The company also launched the ASUS ZenFone Live smartphone just recently, which comes with live beautification mode. The live beautification mode will essentially improve the feed using software, while doing live streams on various social media platforms like Facebook, Instagram, YouTube, etc. Hence if you are an end user who is more into live streaming, then the ASUS ZenFone Live is worth checking out. 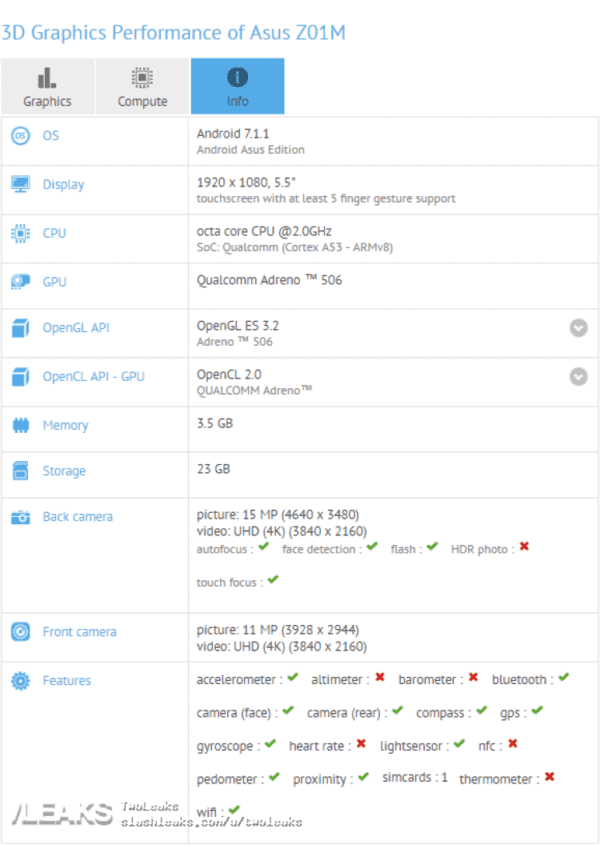