Android O Developer Preview 3 adds a new album art look to the music control notification that’s persistently hanging out in the notification shade while music is playing in the background, further enhancing the notification system on Android, though this is a little less about function and more about design and aesthetics. That said this doesn’t have to be a bad thing. Depending on how you look at it the new artwork that shows relative to the song you’re currently listening to is a neat little add, especially if you’re one who likes visual touches like this one.

While album art was present in these notifications before it was only in the form of a tiny thumbnail that sat in the right most corner of the notification card. Now though the album art takes over the whole notification card. While it’s not confirmed how many different music apps or services this works with, it’s at least apparent that it works with both Spotify and Google Play Music. So the album art appears for multiple music streaming services and likely for all the major ones, though it’s not clear if there are any services which don’t include this new visual tweak. It’s also not clear if this is something that has to be added at the app level by developers or if it something that’s applied at the system level, though given that it works with both Spotify and Google Play Music right off the bat, this would suggest that this is a system level change and would apply to any music service that’s currently playing, whether that be Pandora, Tidal, Apple Music or others.

More than just working for multiple music services, the graphic will continue to change with the song like before, so if you’re listening to John Legend in Google Play Music like in the screenshot below, then the graphic would change to match album art if you changed the song to the latest track from Incubus or any other band or artist. This is really nothing new, but it sort of becomes more visible now that the art takes up the whole card instead of just a small portion of it. It’s also hard to tell from this particular song artwork but Google has designed this new visual touchup so that the color from the album artwork starts from the left side of the notification card and then starts to fade so it blends into the actual album art. If you’re not on the latest developer preview for Android O and you have a compatible device, you can grab the factory or OTA images or opt into the Beta Program and wait for the OTA to come to you. 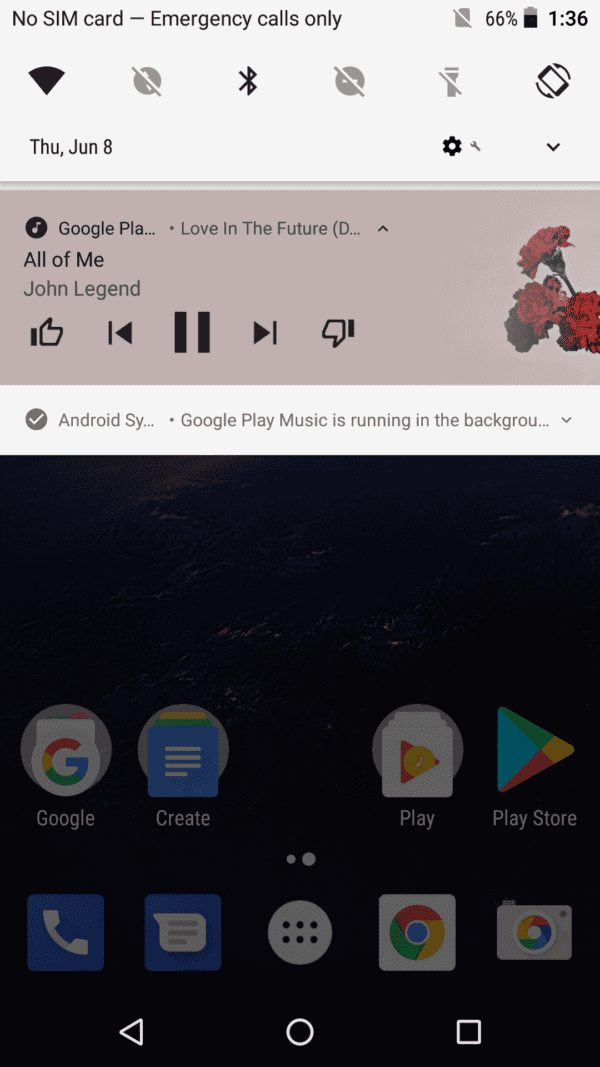