Owners of the Sony Xperia XA should expect a notification stating that the update is now available anytime soon. However, users who want to update their devices now may try checking for the update manually, and then download it once the device confirms that an update is already available. The usual reminders for updating the Android operating system should still be observed when downloading the update for the Sony Xperia XA. For example, it is important to make sure that the phone’s battery has sufficient charge to power the device throughout the update process. It is also advisable that the update is downloaded through Wi-Fi since major Android updates usually have large file sizes and in turn, may consume a substantial portion of data allocation if downloaded through mobile data. While there is no word on the actual file size of the Android Nougat update for the Sony Xperia XA, it is likely to exceed more than 1GB. Given the size of the update, it is also important to ensure that the device’s internal storage has sufficient space for the update.

The Android 7.0 Nougat update brings many new features to the operating system. Some of these new features improve the device’s user experience like the addition of multi-window support and app shortcuts. The multi-window support is native to the Android operating system, so more applications can now be used in a split-screen. Meanwhile, there are also improvements made to the doze mode that could potentially improve the device’s battery life. In addition to these new and improved features, it is likely that the manufacturer also updated the device’s firmware and built-in applications. However, Sony has yet to disclose what those improvements actually are. 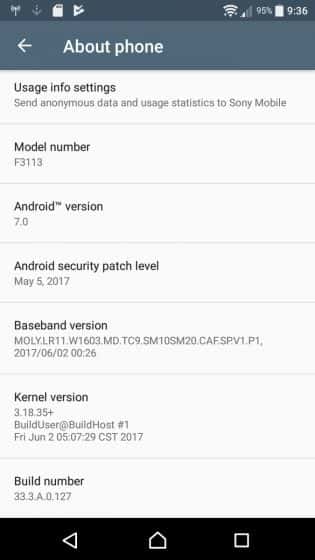