Moto Z Play devices around the world are now slowly receiving the Android 7.1.1 Nougat update, six months after the software version was first released by Google. Aside from the latest OS version, Motorola also included in its update to the Moto Z Play security updates, stability fixes, and additional support for the Moto Mods. It is not clear what version of security updates Motorola is currently rolling out, though Motorola released the April 2017 security update to at least some units of the Moto Z Play last month. Aside from the features of Android 7.1.1, users will also see an addition to their app drawers, the video calling app Google Duo.

As users receive the Android 7.1.1 update, the owners of Moto Z Play will experience the latest features incorporated in the Android operating system. One of them is the addition of job-based emojis that illustrate counterparts from the opposite sex. Aside from the additional emojis, owners of the Moto Z Play can now send GIFs on supported applications like Google Messenger, Allo, and Hangouts straight from the keyboard. Also, users may now perform certain actions on supported applications straight from the home screen. Some examples include opening new tabs in Google Chrome or going straight to the Subscription tab once the YouTube app is opened.

It is advisable that the owners only start updating their units once they are connected to Wi-Fi since the system update may consume a substantial amount of data if downloaded using a mobile connection. In addition, owners are advised to only start the update when the smartphone has 50% charge or more in order to prevent any unnecessary and potentially damaging interruptions in the update process. Given Motorola’s track record on updating their devices, it is expected that the deployment of this system update will be a staged roll-out. Hence, an owner may have to wait for days or weeks until the software update is made available for the devices in a certain region. However, excited owners of the Moto Z Play can still try and check if the update is available by going to the software updates portion of the settings application. 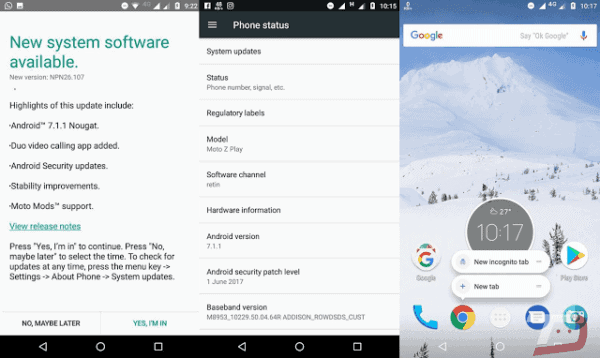