A day ahead of its expected launch on May 25, the Xiaomi Mi Max 2 has been spotted on Geekbench. According to the listing, the upcoming smartphone will be powered by an octa-core Qualcomm chip clocked at 2.02 GHz. The device is also expected to offer 4GB of RAM for a smooth, lag-free experience. Geekbench also suggests that the upcoming smartphone will be powered by the MSM8953 (Snapdragon 625), although, persistent rumors over the past several weeks have suggested that the device will ship with a Snapdragon 626 under the hood. A GFXBench listing last month also appeared to back up those rumors, although, nothing has yet been confirmed officially by Xiaomi. It is important to mention here that the Snapdragon 626 is otherwise known as the MSM8953 Pro, so whether the upcoming handset will be powered by the former or the latter, remains to be seen.

The Snapdragon 625 and Snapdragon 626 are also fairly similar in terms of their specifications. Both chips feature an octa-core Cortex-A53 CPU and the Adreno 506 GPU, but the newer chip is actually clocked 10-percent higher at up to 2.2 GHz, and comes with support for dual cameras and 4K Ultra HD video recording and playback. As for the rest of the hardware specs of the upcoming device, the earlier listing on the GFXBench database indicated that it will feature a massive 6.4-inch 1080p display, and include 128GB of built-in storage. Xiaomi is also expected to launch a slightly lower-spec’d model with 64GB of internal storage. The Mi Max 2 is believed to ship with a 12-megapixel camera on the back and a 5-megapixel camera on the front. The phone is also expected to run Android 7.1.1 (Nougat) out-of-the-box.

The Mi Max 2 will be the second major mid-range smartphone from Xiaomi this year after the Snapdragon version of the Redmi Note 4 was launched in India last February. That particular device is already a chart-topper, and was recently crowned as the best-selling smartphone in the country in the first quarter of this year. Xiaomi will also have high hopes for its upcoming mid-ranger, but it remains to be seen whether this particular device will be launched outside of China, and the response it gets in an increasingly-competitive market. 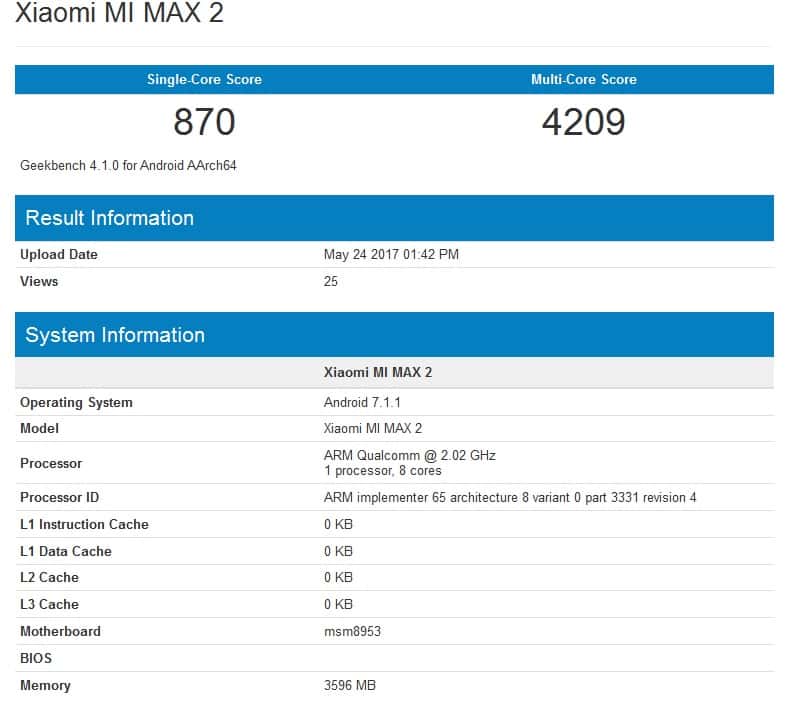