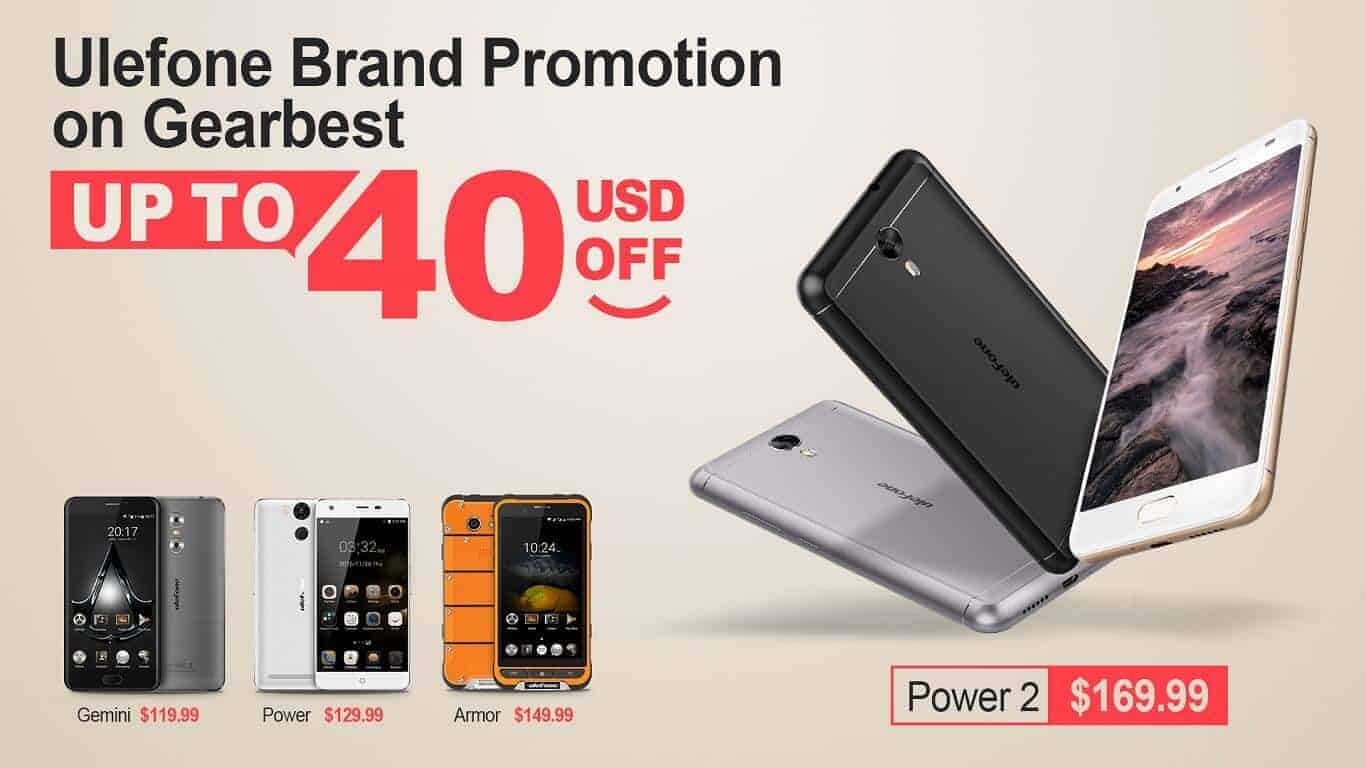 If you are in the market for a new smartphone, and in particular like the Ulefone approach, then it seems it will be worth checking out GearBest within the next few days. As the retailer is currently running a special Ulefone promotion where the price has been slashed on a number of Ulefone-branded smartphones, including some of the most recently launched.

For instance, the recently announced Ulefone Power 2 is part of the sale and can be picked up for only $169.99. It is worth noting that this price also includes $40 worth of free accessories for the Power 2. As for the phone itself, this is a smartphone that places a clear focus on its battery life as the Power 2 includes a substantial 6,050 mAh battery, which should easily get you through two days of usage, if not longer. The rest of the specs include a 5.5-inch FHD display, 4GB RAM, 64GB storage, a MediaTek MTK6750T SoC, and Android 7.0 (Nougat) pre-installed. Alternatively, if you are after a big battery smartphone, but at a slightly better price, than the original Ulefone Power is also included in the sale. Like the second-generation model, the original Ulefone Power also comes packing a 6,050 mAh capacity battery. With the rest of the specs including 3GB RAM, 16GB internal storage, a MediaTek MTK6753 SoC, and Android 6.0 (Marshmallow). This one is available for only $129.99.

If you are in need of a better-protected smartphone, then the Ulefone Armor is also available at a reduced price and can be picked up for only $149.99. The big selling point with this one is the Ulefone Armor's protective body, which among other things, includes an IP68 waterproof certification. If cameras are more of your thing, the Ulefone Gemini will be the one to check out as this smartphone comes loaded with a rear dual-camera setup, which is spearheaded by a 13-megapixel primary camera and backed up by a 5-megapixel secondary camera. In addition to the 5-megapixel front-facing camera that is also on offer. In terms or price, the Ulefone Gemini is currently available for only $119.99 – which also happens to be a price that include a free phone stand, TPU case, and tempered glass screen protector. Other Ulefone smartphones currently on sale, include the bezel-less Ulefone Future (priced at $179.99), the Ulefone Metal (priced at $108.99), the Ulefone Tiger (priced at $108.99), and the Ulefone Vienna (currently priced at $109.99). The sale prices are expected to be in effect while stock remains and up until May 15. More details on GearBest's Ulefone sale through the link below.

Advertisement
Ulefone GearBest Sale
Advertisement
Trusted By Millions
Independent, Expert Android News You Can Trust, Since 2010
Publishing More Android Than Anyone Else
35
Today
67
This Week
175
This Month
4160
This Year
105637
All Time
Advertisement