There's no doubt that VR has been a big sector of technology for the last couple of years, but it could also be hard to pinpoint the level of excitement that consumers and companies alike have for the industry. While the year that HTC Vive and Oculus Rift, as well as others like PSVR and Daydream View launched, was a rather exciting time as it was a year packed full of new virtual reality hardware for consumers to get their hands on, and all from big companies, this year has so far been a little bit different and seems to have been more about building out the technology that's already there with more content. Google and partners have slowly been making more content available for the Daydream platform and with Google I/O coming up next week it's time to look at what the conference might have in store for VR as a whole.

Looking at the schedule for Google I/O on their official page for it, there are only five total sessions, three of which are the same session but spread out over the three days of the conference so there is one to visit each day just in case people miss one. Essentially this will allow everyone a chance to get to this particular session. As for what it will include, the official title for the session on the schedule is Office Hours With the Daydream and Tango Developer teams, and it's described as learning how to build quality VR and AR apps on Daydream and Tango, while learning some best practices directly from members on the team and learning about the latest developer tools. 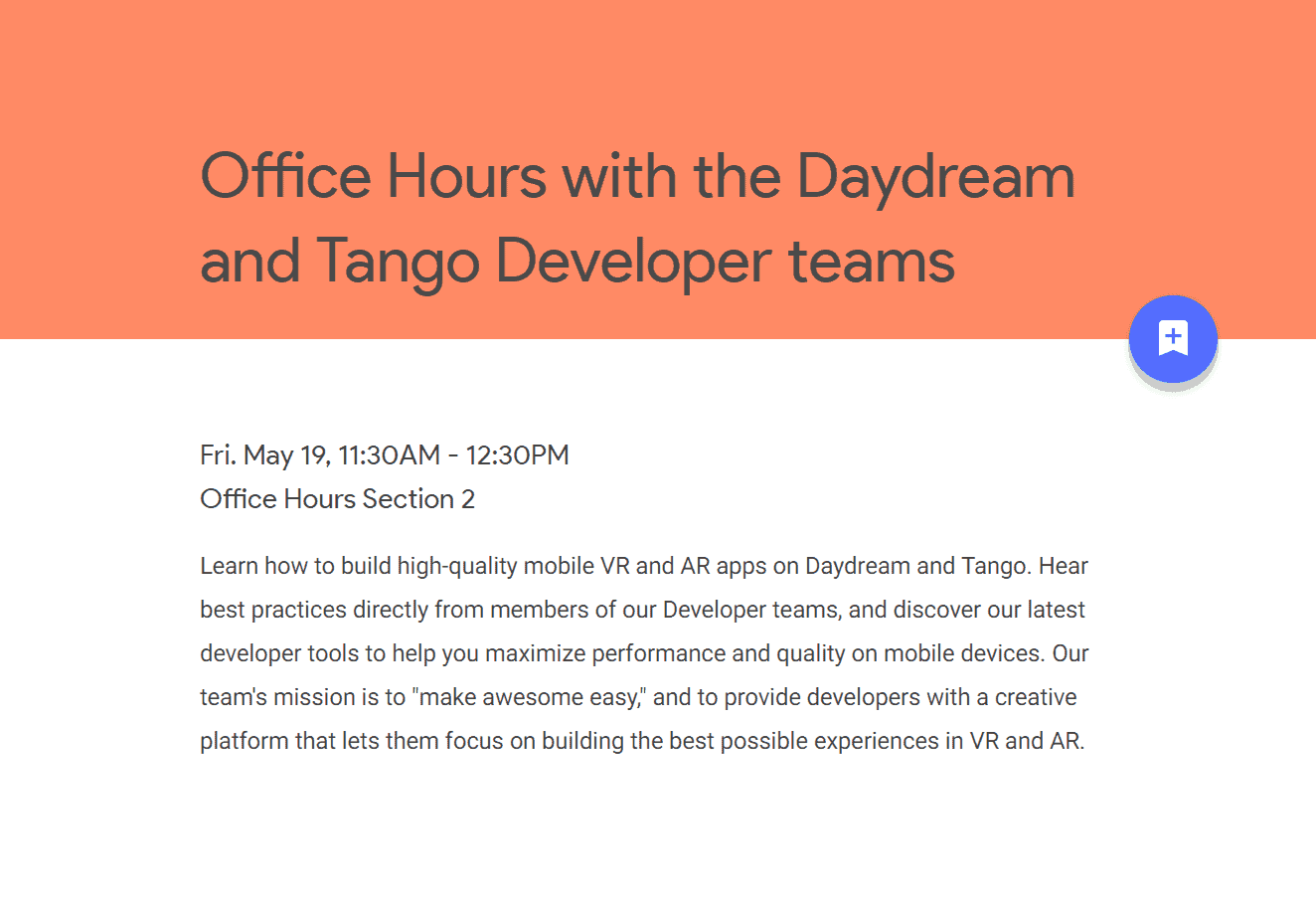 Aside from that session which as stated will be available once each day during the conference, there are two other sessions that will be happening as well, though each on a different day. The first happens on the second day of the conference and is called Bringing VR Video apps to Daydream, and seems to focus on using Unity to create experiences, while the other session is on the last day of the conference, and is about designing screen interfaces in and for virtual reality. Neither of those two sessions seems to focus on much of anything in terms of new and exciting content, though generally Google wouldn't use these sessions for announcing new stuff anyway. So while there may not be anything new in terms of hardware at these sessions, there could very well be new tools or things for developers to use that are highlighted.

As for announcements, these tend to happen at the Keynote Speech which happens first thing Day One, and Google doesn't give descriptions of what happens at the Keynote, naturally. So we're left to wonder and speculate about what if anything they could have in store for the Keynote in regards to VR. While they used last year to announce the Daydream platform officially, they hadn't yet announced the headset itself, that came later in the year during the Fall when they announced the Pixel and Pixel XL. This year, it wouldn't be shocking to see them keep from announcing anything hardware related. After all, they did just announce the Daydream View last October, so it's not even a year old yet. That said, there had been a rumor early last year that Google might be looking to announce a standalone VR headset at some point that wouldn't need a mobile device, and would be more in line with something like the Oculus Rift and HTC Vive, though there hasn't been any real evidence of it yet. There's every possibility that Google could announce something like this at I/O this year but primarily I/O is a conference for developers, and even though they do sometimes and announce hardware at this conference, as they have in past years, last year was mostly software-related and the hardware was announced in the Fall, so it could be the same this year too. There really hasn't been anything pointing to new hardware for the VR platform coming from Google that's leaked out in a while, so anything is possible at this point, and it seems we might just have to wait until the Keynote on Day One to see if Google has anything up their sleeves.