A recent report from the analytics firm Canalys claims that while US is still the biggest market for VR in the first quarter of 2017, the Japanese market is seeing a surge in VR device purchases. The US market comprises 40 percent of the global market for virtual reality devices while Japan now forms 14 percent of the VR market globally. Both countries saw increased use of VR for gaming, as evidenced by the popularity and sales of the PlayStation VR. In the United States, Sony cornered 60 percent of the VR market, while in Japan, the electronics firm has a virtual monopoly with more than 90 percent share of the country’s VR device sales. In terms of actual device sales, Sony is said to have sold 81,000 PlayStation VR headsets in Japan. Last February, the electronics company announced that they have sold 915,000 units of its VR device. Sony’s lower cost headsets and its widely available gaming platform have reportedly helped the company to corner a substantial portion of the industry. Despite its lead, Sony is not expected to rest on its laurels, with new accessories like the Aim Controller expected to help improve the VR experience of the gamer playing the latest AAA titles released on its platform.

Meanwhile, China is now the third largest market for VR devices this year, behind US  and Japan. While gaming is the major reason behind the use of VR headsets in the US and Japan, the education sector is the main driver behind the VR headset sales in China. In this region HTC is the market leader in terms of VR device sales. The company sold 15,000 VR headsets in the country, cornering 25 percent of the market share for VR devices. HTC capitalized on the increasing use of VR headsets in Chinese schools by offering services like the Vivepaper and deals like the HTC Group Edition 10-headset bundle. The Vivepaper allows users to read print content on top of a physical blank booklet, while the HTC Group Edition bundle allows school administrators to buy the HTC Vive headsets at a considerably cheaper price compared to buying the headsets individually.

Given that education drives VR headset sales in China, the device manufacturers are facing a widely different set of challenges. Among them is demonstrating the relevance of virtual reality in the school curriculum, the ease of installation and management of numerous VR devices, and assuring school administrators regarding the certainty of the VR system’s return on investment. Device manufacturers are also working alongside educational content providers to develop systems targeting different school levels. As more schools consider VR devices, manufacturers will surely work harder to convince administrators that their device is the best one around. 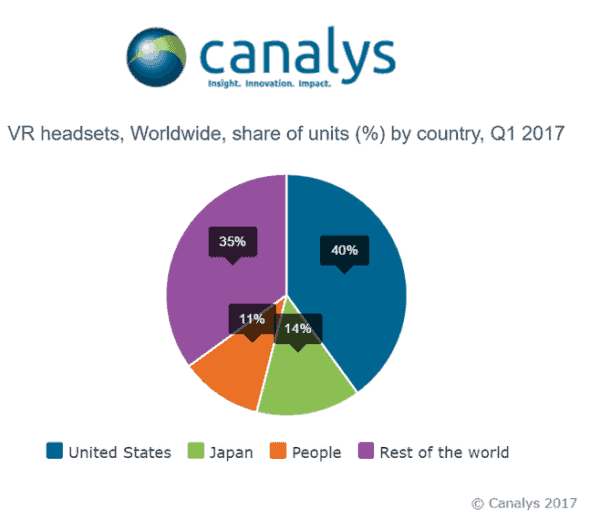