If you are a frequent Uber POOL rider, then Uber has today announced a change that is designed to save you, and your co-riders a little time, in the form of ‘Suggested Drop-Offs.’ As Uber POOL is a service that accommodates more than one rider at the same time, the destination of one of the riders has the potential to affect the others co-riders. The example given in the Uber announcement is an Uber driver having to detour somewhat to gain access a one-way street. When instead, the driver could have just as easily dropped the rider off at the nearest access point (en route) to the one-way street. Which not only might save the additional riders time, but also potentially the one-way street rider.

So with this sort of issue in mind, Suggested Drop-Offs will suggest drop-off locations that might be more suitable to Uber POOL riders. The first thing to note is that will likely only apply when there is more than one rider actually in the car. Likewise, the feature is not designed to change drop-off locations for everyone, just for those that Uber considers to be beneficial to all those involved. As such, Uber explains that its algorithm will be monitoring the route and if it encounters an issue (while on the way) then it will try to calculate if there is any time to be saved by dropping the rider elsewhere nearby. At which point the Uber app will automatically notify the rider of the possible time-saving location.

Which means the rider does not have to definitely make use of the feature. Once the notification arrives, the user will have the option to accept the new drop-off location and if accepted, the Uber driver will then be notified of the change of plans. So it seems, even in such circumstances, the default drop-off location will remain the originally intended ultimate location – the suggestion will just be a suggestion until the rider accepts. It is also worth noting that this feature is currently only being trialed and so will not appear for all Uber POOL riders. In fact, for now it will only show up for Uber POOL riders in Washington DC, Los Angeles, or San Francisco. 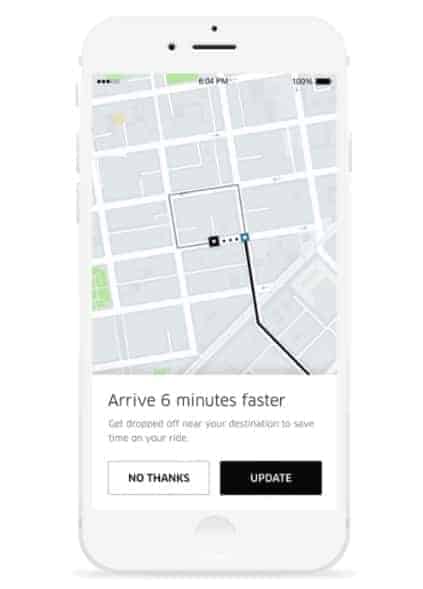