Sprint's Chief Technology Officer John Saw has provided details on how the wireless carrier will utilize its 2.5GHz spectrum for 5G deployment. In a blog post, he explained the efforts of Sprint, its parent company Softbank, and Qualcomm to develop technologies to utilize the frequencies currently held by the wireless carrier. Sprint's 5G development will heavily depend on the 5G New Radio air interface, which allows co-existence with legacy air interfaces used in 4G and 3G through flexible spectrum management. This new air interface also allows for the utilization of frequencies currently allocated for older wireless technologies. If all goes well, the carrier aims to roll out a commercial 5G network by late 2019.

While there has been a lot of testing done on 5G deployment on mmWave frequencies, there are still concerns regarding its implementation. The major concern revolves around the frequencies to be used, with stakeholders pointing out the need for licensed spectra to deliver services with consistent performance and quality. Hence, there are now studies regarding 5G implementation on lower frequencies. To ensure consistency among the implementations, carriers should target around 100MHz of available bandwidth for 5G, either through deployment on a single band or by carrier aggregation. Implementing 5G in lower frequencies also has an advantage of wider coverage per base station, resulting to a less expensive roll-out. Some of the possible frequencies to be used for 5G deployment are 700MHz for low-bandwidth and wide coverage applications and 3.5GHz for higher bandwidth and capacity applications.

With this new development, Sprint takes another look at its 2.5GHz spectrum, which averages around 160MHz bandwidth in the top US markets. The available bandwidth for this frequency makes it an easy target for 5G implementation. While the actual 5G standard is yet to be finalized, the wireless carrier is also already taking steps to ensure its readiness once the deployment goes in full-swing. Among these efforts is its network intensification strategy, which enables the carrier to deliver high data rates in crowded areas. This effort is made possible by the extensive use of small cells. At the same time, the network continues to improve on its LTE signal coverage, with the wireless carrier aiming to deploy a 64 Transmitter, 64 Receiver (64T64R) antenna setup that could result in data speeds of up to 6Gbps in certain locations. 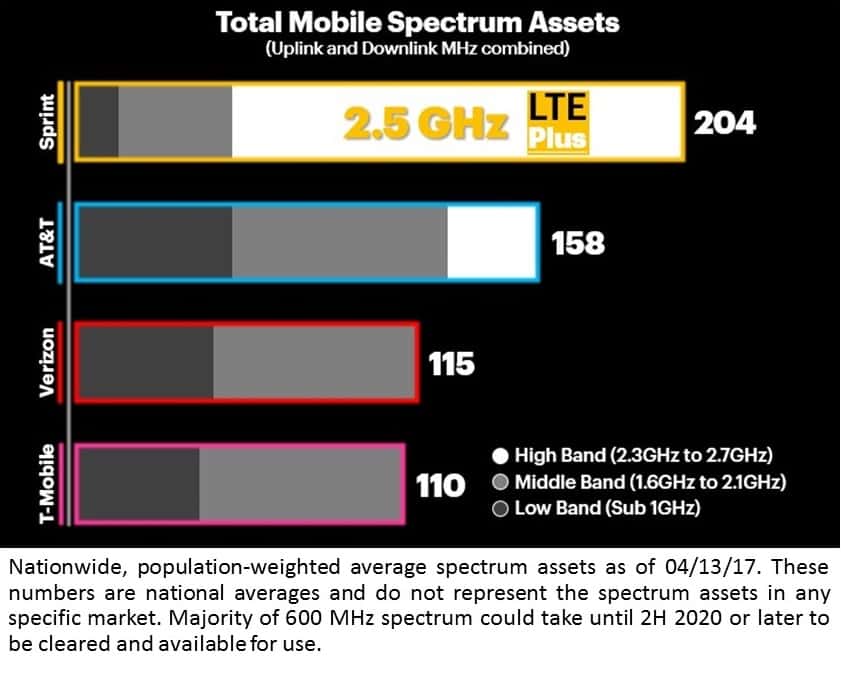