Skip to content
Advertisement
Trusted By Millions
Independent, Expert Android News You Can Trust, Since 2010
Publishing More Android Than Anyone Else
24
Today
63
This Week
513
This Month
2447
This Year
112526
All Time
Advertisement Samsung Display today announced that it will attend the annual SID 2017 event hosted later this week in Los Angeles by the Society for Information Display and confirmed that it will showcase a new display technology during the event, namely the world’s first stretchable OLED panel called the “Dynamic Stretchable AMOLED Display.”

Samsung Display has been improving its OLED display technology for many years, and the company’s efforts in this area led to numerous iterations of its flexible and bendable displays, most of which have been showcased at numerous tech shows in the past. In practice, the company’s efforts in this direction throughout the past several years eventually led to the creation of the so-called Edge display, which is now a staple of the firm’s flagship smartphone lineup including the recently launched Samsung Galaxy S8 series. Samsung Display is now apparently ready to push the boundaries of AMOLED display technology once again with a new type of stretchable OLED panels. The Dynamic Stretchable AMOLED Display can reportedly stretch as much as 12 millimeters while maintaining a high resolution, and unlike the company’s previous flexible panels, it can be bent in both directions. According to industry reports, Samsung Display will showcase a 9.1-inch Dynamic Stretchable AMOLED Display at SID 2017, which will run this week in Los Angeles from May 22 to May 25. The South Korean consumer electronics manufacturer expects the stretchable display to be eventually adopted by devices in the Internet of Things (IoT) segment, recent reports indicate, without clarifying on the matter.

There’s still no word in regards to when the company might be ready to commercialize the Dynamic Stretchable AMOLED Display but considering the pattern Samsung followed with its previous OLED panel advancements, it may take a few more years before stretchable OLED screens become a more common sight in the consumer electronics industry. Although Samsung Electronics has been filing various patent applications revolving around flexible display technologies in the past – including flexible tablets and smartphones – these technologies have yet to prove their commercial viability beyond the now-popular Edge display. An update on the company’s advancements in this field may follow later this year. 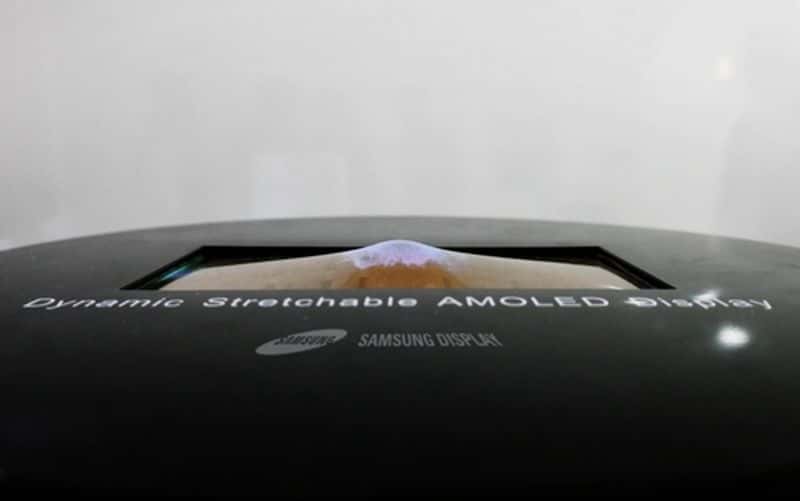