The Xiaomi Redmi Pro 2 is expected to land in a couple of months, and it seems like the phone was listed on Xiaomi’s official website for a brief period of time. If you take a look at the provided image, you will get to see the Xiaomi Redmi Pro 2 listing on the company’s official website, before it was removed. Now, we do not get to see the design of this smartphone, as the image is missing in this listing, but the device’s partial specifications are included, read on.

Now, the original Redmi Pro was announced back in July last year, and it shipped with a dual camera setup on the back, while it was made out of metal. This new handset will probably be made out of metal as well, and even though we still don’t know what will it look like, chances are it will ship with a dual camera setup as well, and a metal build is also not only possible, but quite a probability. In any case, according to the listing, the Redmi Pro 2 will sport a 5.5-inch AMOLED display, same as the original Redmi Pro, and a 4,100mAh battery will also be a part of this package. Now, instead of the Helio X20 and Helio X25 SoCs which were fueling the Xiaomi Redmi Pro variants, the second-gen Redmi Pro device will be fueled by the Snapdragon 660 64-bit octa-core processor. Two 16-megapixel snappers will be placed on the back of this phone, according to this listing, and in addition to all that, the phone’s pricing has also been shared as part of this listing which was removed from the company’s official website.

The Xiaomi Redmi Pro 2 will, if the leaked info is to be believed, cost 1,199 Yuan ($174). Now, this price point is quite affordable, especially if you consider that three models Xiaomi released last year cost 1,499 ($217) Yuan, 1,699 Yuan ($246) and 1,999 Yuan ($290), respectively. Now, it is possible that the most affordable Redmi Pro 2 model will ship with 2GB of RAM, and 1,199 Yuan might be its price point. In any case, we’re expecting Xiaomi to release more than one variant of the Xiaomi Redmi Pro 2, so you can expect to see 3GB and 4GB RAM variants as well. This handset is expected to land in the near future, so stay tuned, we’ll report back soon. 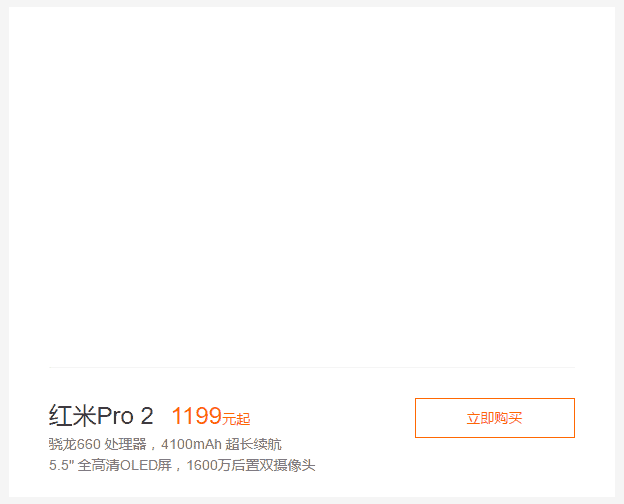