Skip to content
Advertisement
Trusted By Millions
Independent, Expert Android News You Can Trust, Since 2010
Publishing More Android Than Anyone Else
25
Today
172
This Week
89
This Month
990
This Year
127091
All Time
Advertisement 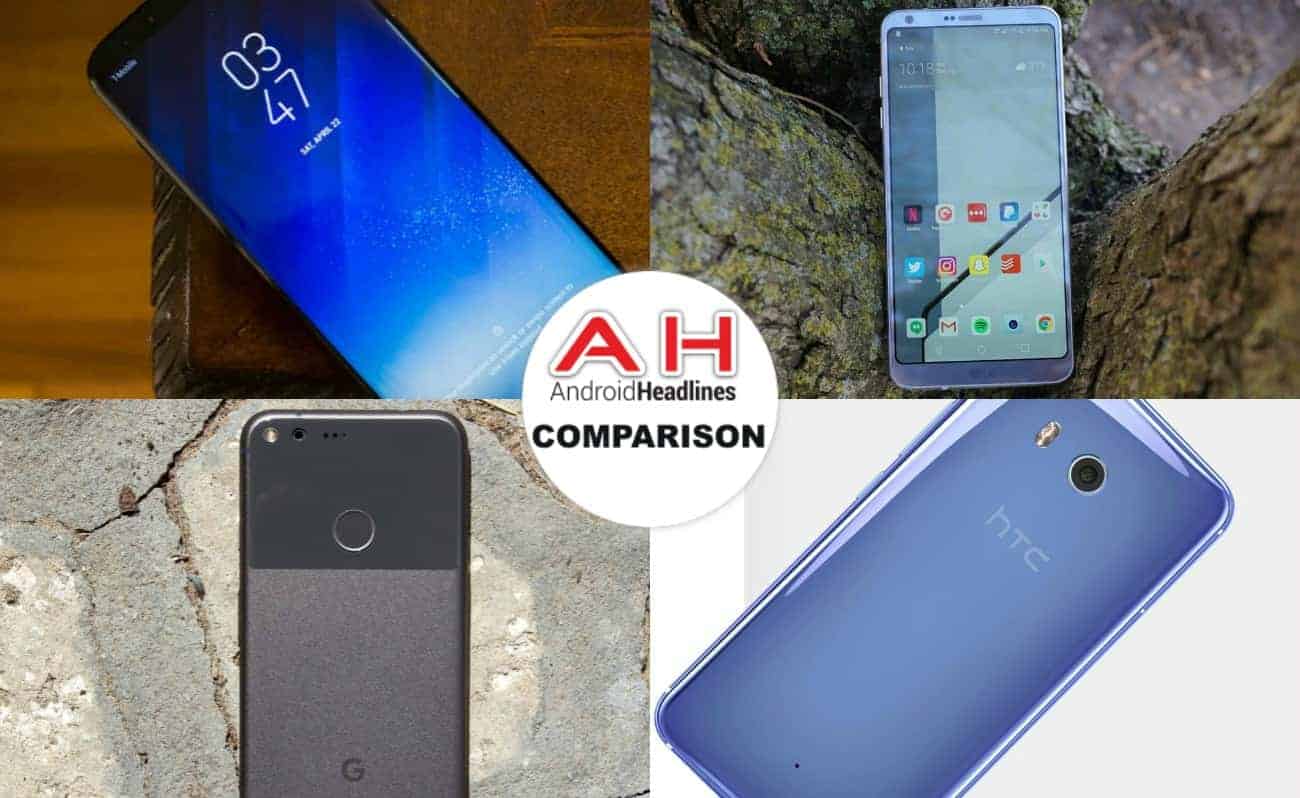 Do we have a good one for you today – a special comparison of the Samsung Galaxy S8, the Google Pixel XL, the LG G6, and the new HTC U11. With the official announcement of the HTC U11, we wanted to see just how the new HTC flagship held up to its current mainstream competition. The Google Pixel XL model came out in October 2016 and is the oldest of the group, but it is Google’s current flagship until a new model arrives on the scene this fall. Next, the LG G6 came out in March, followed by the Samsung Galaxy S8 in April, and now the HTC U11. Let’s take a quick look at all four and see what we can find out about these flagship smartphones – is there really that much of a difference or are there individual features that would make you want to own one over the others. 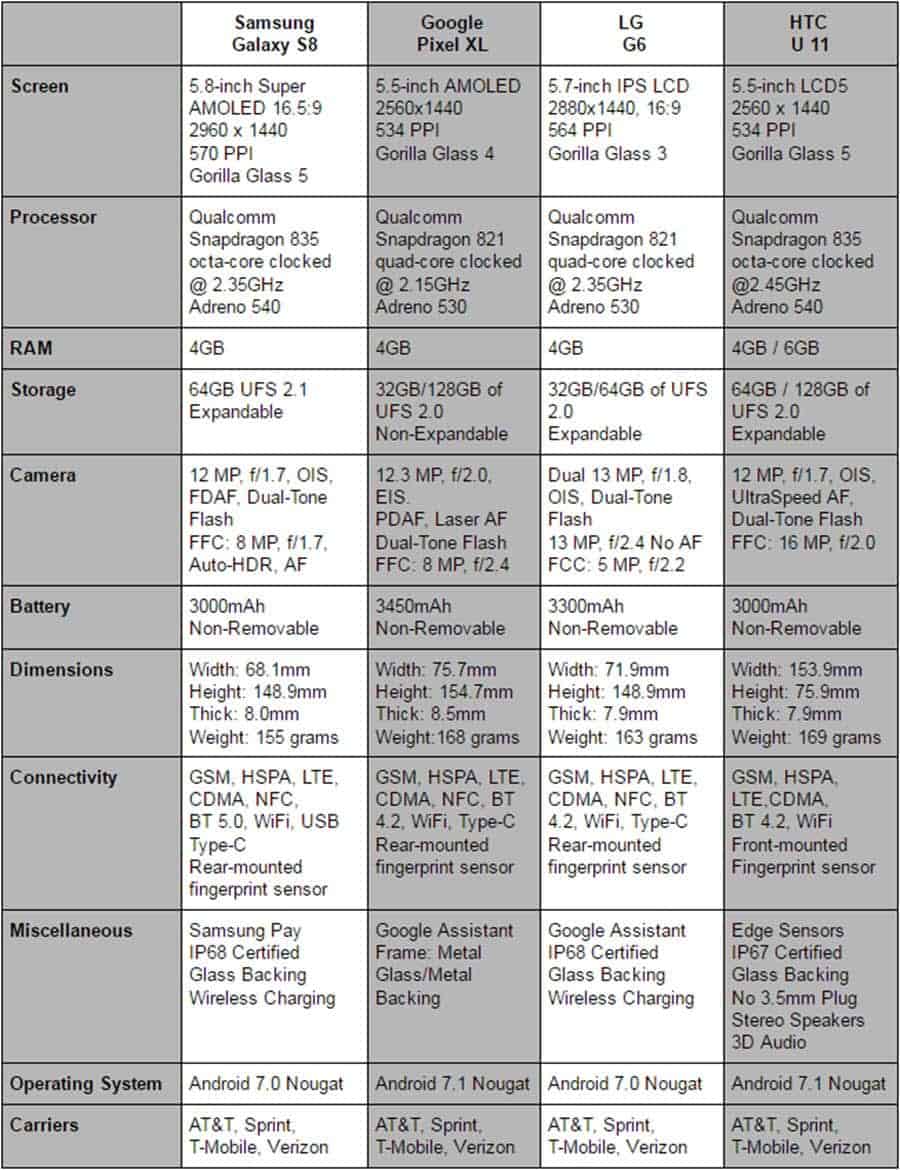 The design of this batch of smartphones is as diverse as the manufacturers. Some of our smartphones are using an all glass, front and back, design tied together with a metal frame, while others use a mixture of glass and metal. However, the materials are only the beginning as the manufacturers use different designs to differentiate themselves from one another.

The Samsung Galaxy S8 is all Gorilla Glass 5, front and back, secured with a metal frame. Samsung introduced their new Infinity Display with both sides of the display wrapping around to meet the back in what appears to be a seamless effort. It makes for no bezels on the sides and very small bezels top and bottom. Samsung moved the fingerprint sensor to the back and eliminated their Home button for a sleek, new, look.

The Google Pixel XL uses a combination of a polished glass and metal back – this gives it an interesting look from the back of the device, but the front is rather pedestrian looking with large bezels. It has a typical smartphone design with rounded corners, but the HTC built Pixel XL does have its fingerprint sensor built into the back.

The LG G6 used an all glass design with a metal frame, but opted for small bezels all around. LG rid itself of the modular design of the LG G5, but kept its dual camera design and the fingerprint sensor on the back, giving the new LG G6 an overall updated design, while breaking no rules.

The new HTC U11, much like the LG G6, kept small bezels all around and incorporated Edge Sensors that allow the user to press certain areas of the edge to perform different functions. The HTC U11 keeps the basic design of the HTC U Ultra with a high gloss backing, but the overall design remains a typical looking smartphone.

The displays all vary slightly in size and shape – the Pixel XL and HTC U11 are both 5.5-inches and the Galaxy S8 and LG G6 use the 16:9 style ratio – with two using the AMOLED technology and two using the LCD technology. All four of the devices use the Quad HD (QHD) display resolution, giving all four displays a very similar resolution.

The Samsung Galaxy S8 uses the largest display, coming in at 5.8-inches. It uses Samsung’s Super AMOLED display and a 16.5:9 ratio with a resolution of 2960 x 1440 pixels, which works out to 570 pixels-per-inch (PPI). It incorporates the ‘always-on’ display technology to save battery life and to make it easier to view notifications. Gorilla Glass 5 protects the display.

The LG G6 sports a 5.7-inch display and uses the IPS LCD technology and has a 16:9 aspect ratio and a 2880 x 1440 pixel resolution. This works out to about 564 PPI. It too, has an ‘always-on’ display feature and is Dolby Vision/HDR10 compliant. Gorilla Glass 3 protects the display.

The processors used in these top four smartphones are all made by Qualcomm – except the Samsung Galaxy S8 sold in countries other than the US, which use their Exynos 8895 – and even there we only have the Snapdragon 821 and the Snapdragon 835 represented. Both are terrific processors with lots of capabilities and features available to the manufacturers that choose to access them.

The Galaxy S8 was the first major manufacturer to offer the new SD835 octa-core processor with 10nm technology. It has a quad-core clocked at 1.9GHz and a quad-core clocked at 2.35GHz. It is teamed with the excellent Adreno 540 GPU to handle your most demanding graphic needs. The Galaxy S8 packs 4GB of DDR4 RAM and 64GB of UFS 2.1 internal storage that is expandable via a microSD card.

The Google Pixel XL uses the Snapdragon 821 quad-core processor clocked at 2.15GHz and an Adreno 530 GPU to handle its graphics. In an effort to extend the life of the SD820, Qualcomm tinkered with it, added an extra 10-percent of processing speed, and renamed it the SD821. The Pixel XL packs 4GB of DDR4 RAM and either 32GB or 128GB of UFS 2.0 non-expandable internal storage.

The LG G6 also picked up the Snapdragon 821 and Adreno 530 for in their new flagship. They did not want to wait until the SD835 would be available to them, so they decided to go for the SD821 to push out their newest flagship before the Samsung Galaxy S8. The LG G6 packs 4GB of DDR4 RAM and either 32GB or 64GB of UFS 2.0 expandable storage.

The HTC U11 is late to the party, as usual, so they were able to use the SD835 in their new flagship. They have the octa-core processor clocked up to 2.45GHz and are using the Adreno 540 for graphics processing. The main model will have 4GB of DDR4 RAM and 64GB of UFS 2.0 expandable internal storage. There is talk that a 6GB/128GB model may be sold in China only.

There is not a smartphone in this group that will disappoint you in the camera department. Pictures from all of these devices will make you proud. Are the cameras perfect, of course not, but when you think back on how far smartphone cameras have come, it is amazing the quality these manufacturers can muster out a small, handheld device.

Samsung decided to keep the camera from last year’s Galaxy S7, as it was that good. What Samsung concentrated on this year was to fine-tune the imaging software to help make its pictures that much better and to increase the options when you want to go in a manual mode. It uses a 12MP primary lens with large, Dual Pixels, a large aperture of f/1.7, OIS, PDAF, and a dual-tone LED flash. The front-facing camera (FFC) is a nice 8MP size and uses the same f/1.7 – it even has autofocus.

The Google Pixel scored the highest rating from DxOMark last year and it uses a 12.3MP main lens with an f/2.0, EIS, PDAF, Laser AF, and a dual-tone LED Flash. Its FFC is 8MP with an f/2.4 aperture.

The new HTC U11 uses a 12MP with HTC’s UltraPixel 3, an aperture of f/1.7, OIS, UltraSpeed AF, and a dual-tone LED Flash. The FFC is a large 16MP with an f/2.0 aperture for selfies and video chatting.

This year, all of the batteries are non-removable – a growing trend that will likely continue. The Galaxy S8 uses a smaller battery than most flagship devices and comes in at only 3000mAh. However, with the efficiency of the Snapdragon 835, its ‘always-on’ display, and Android Nougat’s improved Doze feature, you should not have any trouble getting through a day on a single charge. When you need a charge, you not only have access to Quick Charge 2.0, but also wireless charging. The Google Pixel XL has a large 3450mAh battery that can also take advantage of the Doze feature and offers rapid charge as well. The LG G6 uses a 3300mAh battery and uses the ‘always-on’ display to save battery life as well as Nougat’s built-in Doze feature. The LG G6 offers Quick Charge 3.0 and wireless charging when your device needs charge. Again, the LG G6 should easily make it through a full day of moderate to heavy usage. The HTC U11 has a 3000mAh battery with rapid charge available, when needed. It too can take advantage of Android’s Doze feature and should last you a good day.

Samsung did a complete redesign of the Galaxy S8. It measures 148.9 x 68.1 x 8.0 mm, weighs in at 155 grams, and is the only one of the group that has an Infinity Display that wraps around the edges with no bezels on the right or the left. Samsung keeps its IP68 water certification. It is the only device in the group that offers Samsung Pay as an option. The Galaxy S8 also has a heart rate sensor, oxygen saturation sensor, did away with their physical Home button, added their personal assistant, Bixby, Samsung Connect, Samsung Health, and Samsung DeX. Samsung also included Facial Recognition and an Iris Scanner for added security.

The Google Pixel XL measures 154.7 x 75.7 x 8.5 mm and weighs in at 168 grams. It comes running Android 7.1 Nougat right from the box. You will have a choice of Blue, Silver, or Black. It also has Google Assistant built into the device as part of Goggle’s growing ecosystem.

The LG G6 is a complete makeover of the LG G5. It measures 148.9 x 71.0 x 7.9 mm and weighs in at 163 grams. The LG G6 is more modern looking with even smaller bezels. LG took away the removable battery, but added IP68 water and dust protection. They also included wireless charging and is the first non-Google phone to include Google Assistant.

The HTC U11 looks like the newer HTC devices with its shiny back and smaller bezels. HTC only went up to the IP67 certification for water and dust. They kept the Hi-Res audio and BoomSound HiFi. HTC incorporated a ‘squeezable’ frame into the HTC U11 – it it not touch sensitive, but responds to the pressure from actually being squeezed. This allows the user direct access to many of the devices features.

This has been a look at some of the best smartphones available on the market today, and it appears that the playing field is getting leveler all the time. If you want the sexiest looking phone, it would definitely be the Samsung Galaxy S8. The most powerful devices would be the Galaxy S8 and the new HTC U11 with the Snapdragon 835 and Adreno 540. If you were looking for the device with the most innovation, it would be the Galaxy S8 for its display or the HTC U11 for its pressure-sensitive sides. It you want to run pure vanilla Android and get the fastest Android updates, then you need to get the Google Pixel XL. All of these devices take great pictures – we have not seen any from the HTC U11, but we expect good results based on our past experiences.

This comparison was made to see how the new HTC U11 smartphone would stack up to the other flagship devices. Design is a personal matter and it may not be to your liking, but it is quite apparent that they can hold their own in the specification department. It is a shame that HTC did not go all the way to the IP68 certification, but the ability to squeeze the sides is an intriguing concept and one we look for to trying in our review. Pricing is always high on the flagship devices and the HTC U11 should fall right in place with the others.